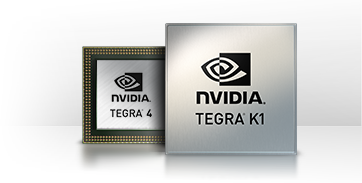 If iOS is your sole outlet for gaming, you’ve been missing out on all the cool stuff Nvidia has been up to lately. In a nutshell, the Kepler chips they’ve been releasing lately scale ridiculously well, allowing similar versions of the same graphics processors to be used in everything from massive supercomputers to mobile devices. This time around, they’re combining a 2.3Ghz quad core ARM Cortex A15 processor with a graphics processor packed with 192 Kepler-based cores. It’s capable of pushing 4K video with “record levels of performance and battery life" through processor architecture wizardry that allows the K1 to automatically enable and disable cores based on load.

The Verge has a hands-on video of the new K1 in action, featuring a custom build of the Unreal Engine and a realtime face rendering demo. Check it out:

The Verge’s takeaway from the facial animation demo was that “it’s pretty ridiculous to think that it’s all being done with a mobile chip," currently the K1 is being demonstrated inside of 7" tablets, and being a prototype and all it’s difficult to say what kind of performance we’ll see out of these chips once they’ve been sandwiched down into smartphones. Regardless, it’s still cool seeing Nvidia push the performance envelope, as it undoubtedly means that Apple is going to similarly up the ante with the next revision of the A7 (Presumably, the A8) processor.