It’s a little odd the first time you see an official first party franchise appear on a competing platform, especially one involving a mascot character. Seeing Bonk on the NES and Sonic on the Gamecube was a bit surreal, concretely driving home the point that things had changed in the games industry. Well, the near-ubiquity of mobile devices has brought yet another change to the business, and while I don’t think there’s any question that iOS is a competitor to the Vita and, indirectly, the PlayStation 3/4, Sony’s obviously comfortable exploring its potential for cross-marketing. This should be a win for all involved, but judging by their first steps into the App Store, it’s turning out to be quite the opposite.

Ratchet & Clank: Before the Nexus (Free) is the third companion app that Sony has released. The idea with these is to release some sort of useful side-game either shortly before or alongside a new release for the consoles, presumably to help whip up some hype or keep people thinking about the new game while they’re away from it. The first one they released wasn’t a game, but rather an information resource for Starhawk. The second one was an actual game, released just ahead of Knack and the PlayStation 4. Knack’s Quest (Free) was a simple match-3 puzzle game where you could earn items for the console version. Nothing special, but it’s hard to substantially mess up a match-3 puzzle game, so I’m sure some fans enjoyed it, even though its gameplay had little to do with the real game. 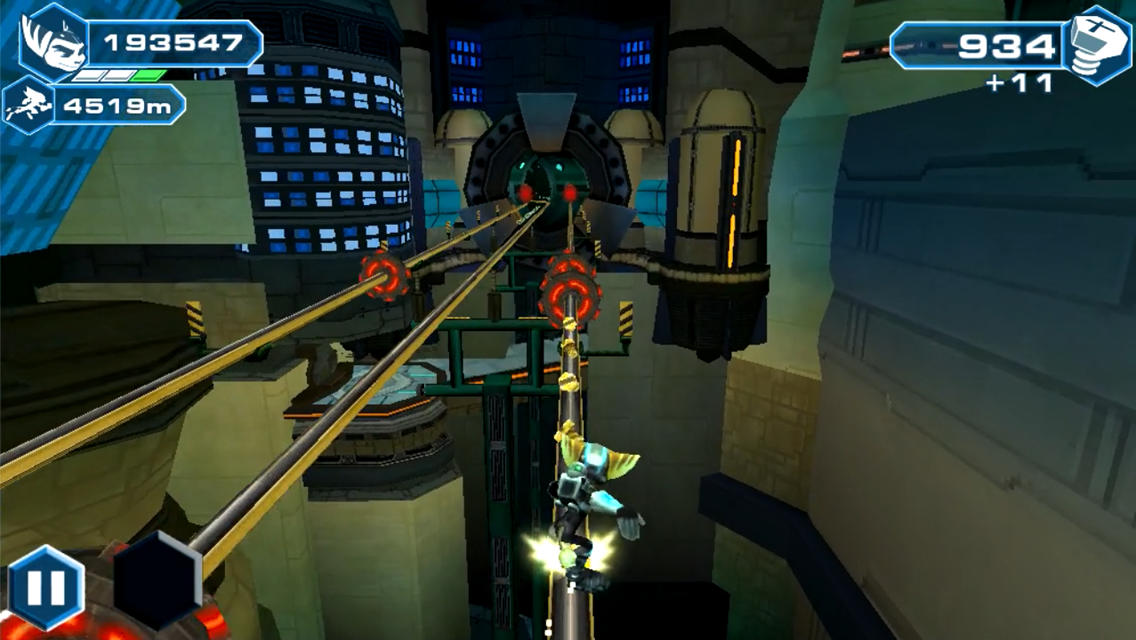 This app lags a bit behind the launch of Ratchet & Clank: Into the Nexus on PlayStation 3, which has received somewhat mixed reactions from players. Unlike Starhawk and Knack, Ratchet & Clank is a pretty well-known brand, with it being a fairly long-running series that has spanned four platforms. The games are primarily action platformers, but there are a lot of mini-games and challenges in them that would make for fine smaller scale apps, and that’s just what they’ve done here. Before the Nexus is an infinite runner that is largely based around the rail-riding segments of the games with a bit of auto-running and shooting for good measure.

It’s pretty typical three-lane fare, with horizontal swipes moving Ratchet from lane to lane, upward swipes making him jump, and taps on the screen allowing him to fire his weapon. It’s kind of interesting how series mainstays like collecting bolts, buying and upgrading new weapons, and completing specific tasks to earn rewards fit in snugly with the runner genre. You can even earn Raritanium that you can use in the console game by linking the game with your SEN account. I mean, it’s not innovative by any means, but this should be great for fans, just by looking at it. 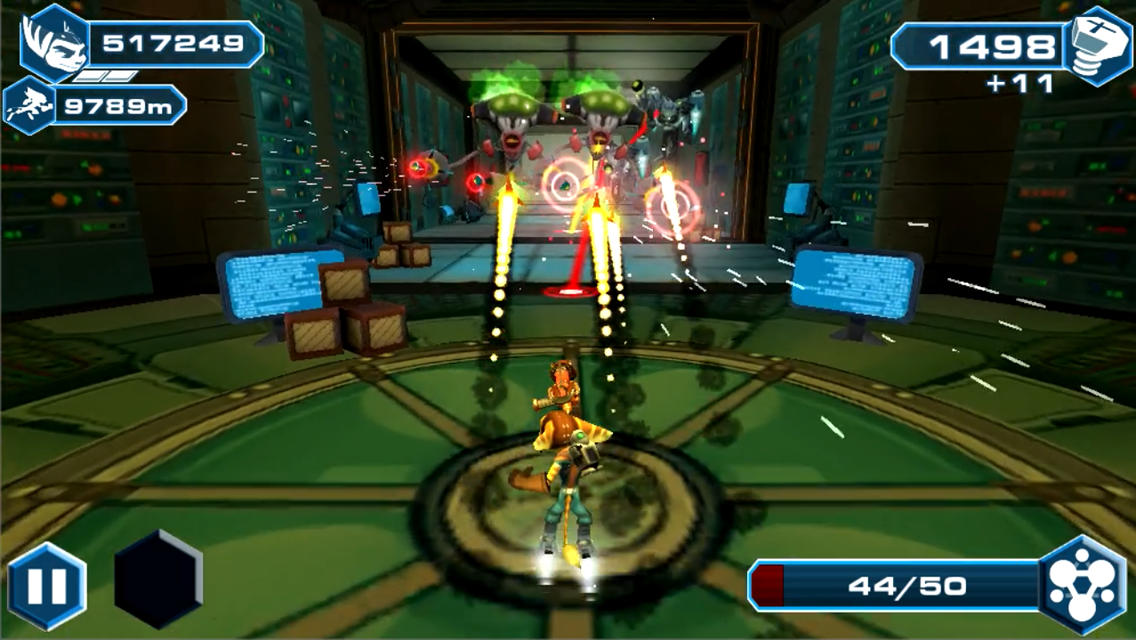 Sadly, the game is kind of terrible. Oh, everything checks out on the surface, to be sure. It looks decent enough, there are plenty of upgrades that come at regular enough intervals to keep you playing, and obstacles vary enough to keep things interesting. It doesn’t run you into any ridiculous walls the way Sonic Dash (Free) was prone to at launch. The problem is that the game controls horribly. Basically, when you’re shooting at something, Ratchet has a tendency to read your taps as swipes, a mistake which is often fatal. I’m at a bit of a loss as to how this happened, because the controls aren’t complex at all. My guess is that the movement controls read even mild horizontal motion as swipes. As bosses and many other enemies require multiple hits, you’ll probably be tapping pretty fast on your screen to shoot rapidly, and even a slight twitch in either direction will set Ratchet off.

There are other issues too, albeit none so important as that one. Your first few games, you’ll be collecting bolts and wrestling with the controls when the game will surprise you by letting you know that your gun has finite ammo that persists across games. Once it’s empty, you have to touch a button at the top of the screen to exchange some bolts for a reload. Of course, you’ll only run out of ammo while you’re shooting, which means you’re probably in the middle of a fight, so jamming on that button, and doing it in a way that isn’t going to have Ratchet hopping to his left or right, can be tricky. On top of that, the reload is a little on the expensive side. It feels like an unfair tax for playing the game, especially in the early going. The skill points, which is what this game calls its missions, are a little too difficult initially as well, in my opinion. 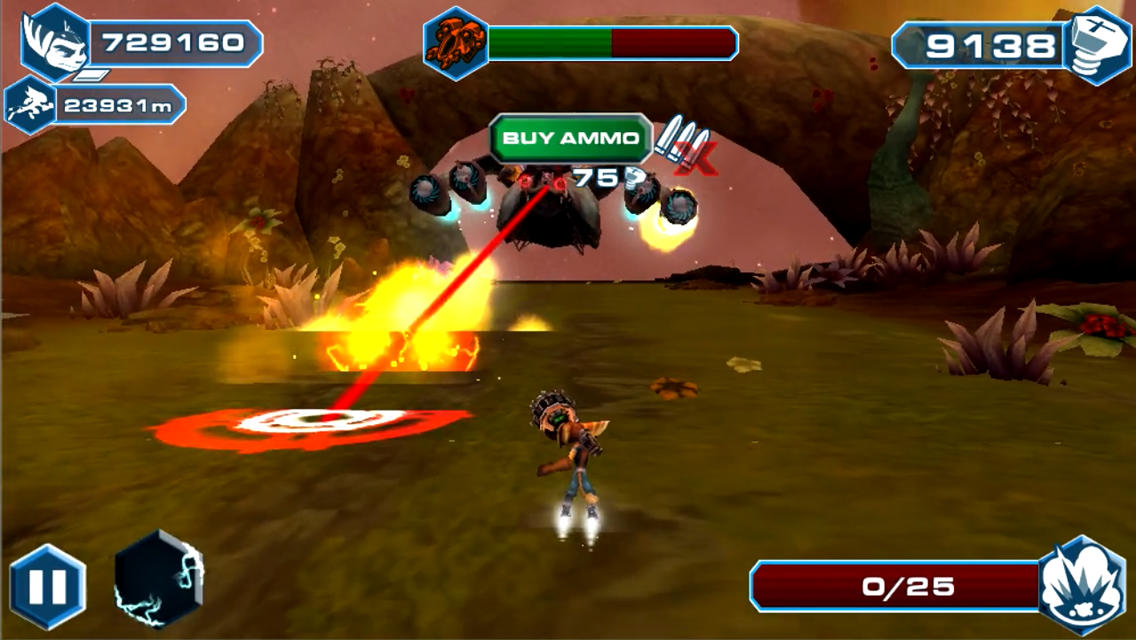 The trademark humor of the series is also completely absent here. The opening cutscene is unvoiced and dryly-written, and while Ratchet will let out little yelps and groans, neither he nor Clank speak at all. Captain Qwark only makes the smallest of cameos, and he, too, is mute. I realize Sony probably didn’t want to break the budget on this, but how hard would it have been to have the voice actors record a few extra lines while they were in doing the console game? A few quips put in the right places would have really helped things out here. I mean, Clank just sits there on Ratchet’s back, not moving or saying a word. It’s creepy.

As a fan of this series, I’ve gotten used to being disappointed in recent years. Still, I expected better from Ratchet & Clank: Before the Nexus. It can’t be that hard for a company with Sony’s resources to put together a competent runner without breaking the bank. The source material is a perfect fit for the genre, and the characters have enough personality to make it stand out even without doing anything drastic gameplay-wise. Unfortunately, we’re going to have to chalk this one up to defeat being snatched from the jaws of victory. It even fails as a cross-promotional tool, since Raritanium can be farmed in the console game just fine without forcing yourself to play a horrible runner. I sincerely hope to see better things in the future, both for these characters and Sony’s presence on the App Store, but for now, even fans are going to find little joy in this mess.