I’m going to get something out of the way up front so that I don’t harp on it too much for the rest of this review. The icon for Clash of Puppets ($2.99), that image up and to the right a little bit? That is the most terrifying thing I have seen in ages. I’ve seen those unblinking plastic eyes in my nightmares every night for the last few days. I have no idea why the main character of this game is creepy, but he is. None of the monsters are as scary as he is. He’s like Chucky’s sick uncle. Then you play the game and he has a child’s voice. This does not make him less horrifying, at all.

Okay, now that I’ve gotten that out of my system, let’s talk about this game. More than anything else, Clash of Puppets reminds me of a platformer from the early days of the 32-bit era of consoles, when the Sega Saturn and especially the PlayStation allowed developers the processing muscle to create 3D games. Things like racing games, shooters, and fighting games had fairly simple transitions to 3D, but in those heady pre-Super Mario 64 days, everyone had different ideas about what a 3D platformer should work like. Experimental titles like Bug! and Jumping Flash ultimately failed to establish new genre conventions, and the one-two punch of Super Mario 64 and Crash Bandicoot changed the rules so decisively that virtually every 3D platformer to come after them simply aped what they set down. 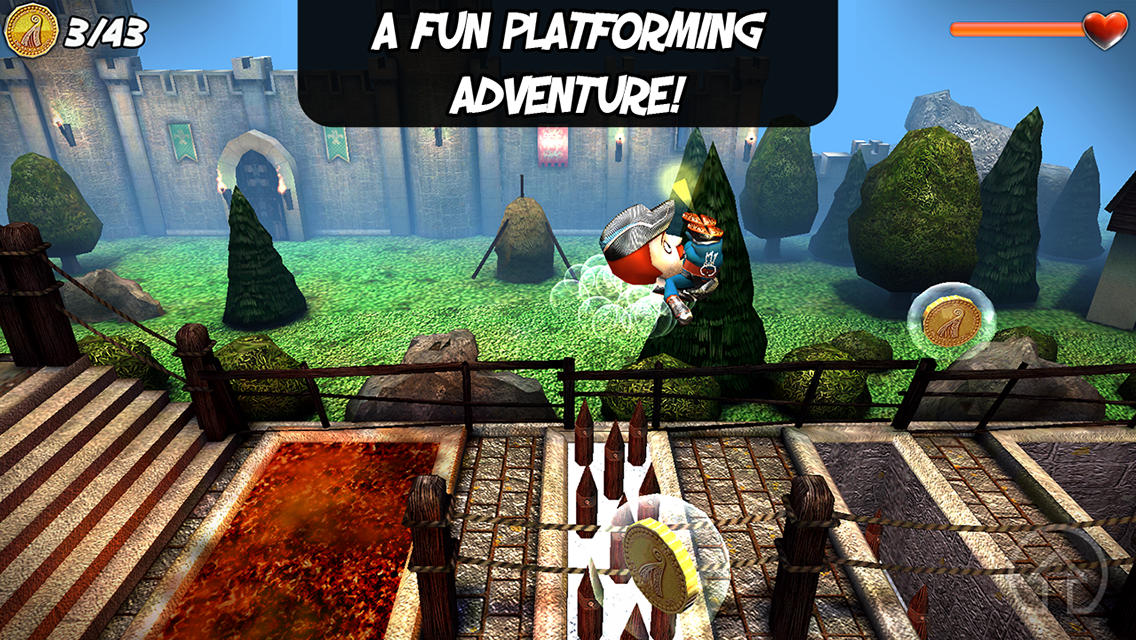 That makes the prototypical 3D feel of Clash of Puppets an interesting curiosity. It’s a little bit Bug!, a little bit LEGO, and a little bit twin-stick shooter. You’d be forgiven if you thought this was just another arena-based hack ‘n’ slash/brawler game, and at times it certainly feels like one, but there are other elements to the game that distinguish it. Most notably, there’s some honest-to-goodness platforming in here which, along with some light puzzle elements, do a good job of breaking up the fighting. There are even a few levels without any battles in them, balanced out with a few levels that are nothing but fighting.

All the more unfortunate, then, that those parts are the worst parts of the game by far. It’s not even a matter of the controls, like one might expect. The game supports iOS 7 controllers, but I don’t have one to test with yet, so all I can talk about are the touch controls. There’s a floating stick used for moving Charlie, the main character, around, and buttons for jumping and using your melee attack. To use a ranged attack, you simply push in the desired direction using your right thumb. There’s a button at the bottom center of the screen for using your traps, and changing between weapons and traps requires you to flick up on their respective icons.

The controls work surprisingly well, apart from the problem of the gesture for weapon/trap changing sometimes accidentally calling up the iOS menu. Charlie is quite responsive and I never had any issues with getting him to go or shoot where I wanted him to. Even jumping, often the bane of 3D platforming with virtual controls, works without a hitch. It might seem like a simple thing to ask for, but all too many platformers fail by virtue of poor controls, so I’m pretty pleased that things work so well here. Charlie feels good to move around and play with, something that is absolutely critical to a successful platform game. 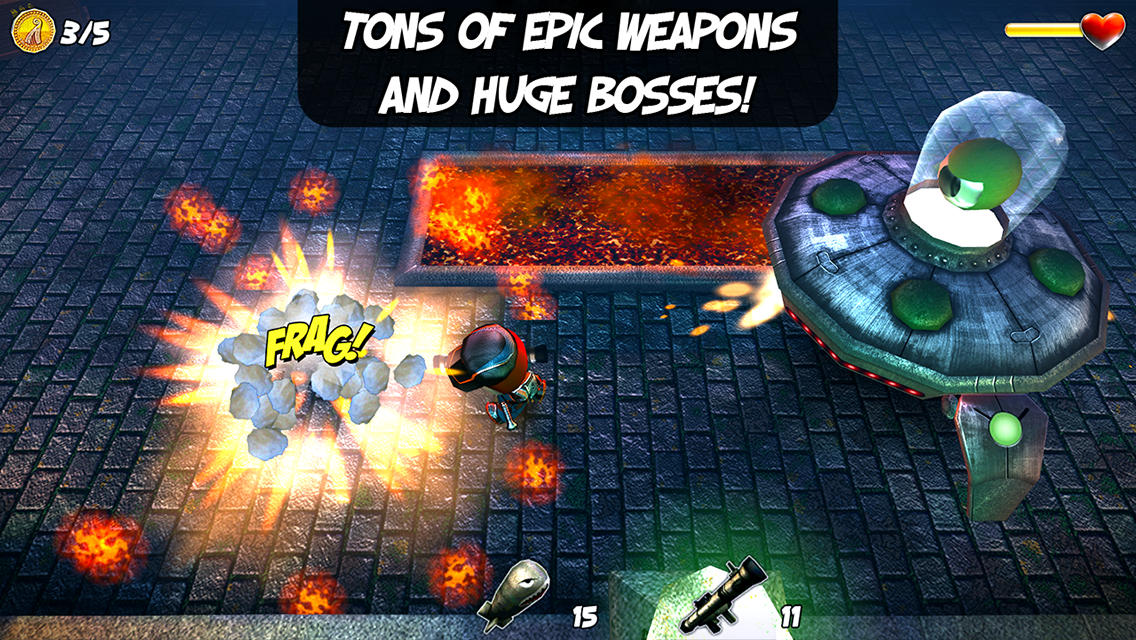 It’s not enough to just have a character that controls well, though. Every great platform game has great level design. It’s the biggest thing separating games like Super Mario 64 from things like Gex. Clash of Puppets falls flat on its face in this respect. There are a few different types of puzzles in the game, but most of them involve switches and doors. Sometimes you’ll be shooting a switch, sometimes you’ll be pushing a block onto one, and other times you’ll need to fix one by finding a gear.

This game really enjoys making you traverse to one side of a set of obstacles to pull one switch that opens a door back on the other side of the exact same obstacles. That’s bad enough, but it likes that type of puzzle so much that you will sometimes find yourself crossing a set of obstacles to hit a switch to open a door to another switch back on the other side, which when used, opens the door to yet another switch on the opposite side again. More than one level has you criss-crossing the exact same set of hazards several times with no variation whatsoever. This kind of mechanic is not fun, nor is it challenging. It’s just tedious.

The other main problem I have with the game is the hit-stun. When Charlie takes a hit, he’s briefly stunned and wide open for another hit. There’s no period of invincibility, and Charlie doesn’t recoil much either, so if you accidentally stumble into a damaging trap, your life can drain away in a hurry. The same goes for if you let yourself get crowded by the enemies. You’ll usually get a chance to get out of it before you die, but it’s really easy to lose a lot of health from small mistakes. The levels don’t have any checkpoints, either, so if you run out of health, you have to start from the beginning again. Some of the levels run pretty long thanks to the aforementioned tedious busy work, and the feeling of dread at having to re-do a bunch of tedious back and forth is enough to make you put the game down, especially if you mess up near the end of the stage. The longer levels could really use a single checkpoint in the middle. 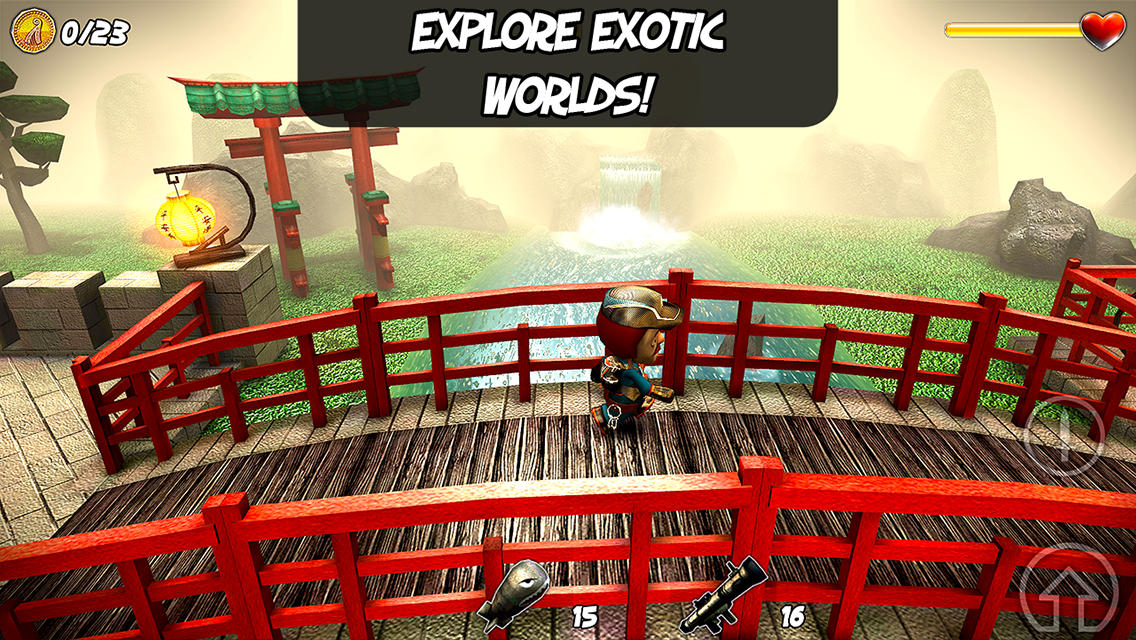 The story mode runs across 30 stages of varying lengths. As I mentioned before, some of them feature only combat, while others focus more on platforming, but most stages are a mix. There are three different visual themes for the levels, and you get 10 stages of each. The themes come with their own enemies, but they, like everything else in the levels, are just newly-skinned versions of the enemies from the other level sets. At the end of each set of stages, you’ll face off against a UFO boss. You have to clear every stage to unlock the next one, so if you happen to get stuck, you’ll just have to keep trying. There are no IAPs at all, so you can’t buy your way out even if you wanted to.

There’s good incentive for clearing the stages, though. As you play through, you’ll earn new weapons and traps. At any given moment, you can have three different weapons and three different traps. Collecting a new one will replace the old one in its line. They’re almost always an improvement, though I did find myself wishing I could go back to the previous gun after I picked up the relatively useless shotgun. Fortunately, another upgrade was right around the corner. The other good reason to clear the stages is to unlock new arenas for the game’s survival mode. Finishing a set of levels allows you play a special survival mode stage from that theme. These are pure arena battles where waves of enemies keep coming until you finally perish

I found the survival mode to be more enjoyable than the story mode, thanks to not having to do any dull switch relays. I said earlier that Charlie is a fun character to play with, and that aspect shines when level designs are taken out of account. I’m glad both modes are in the game, but survival mode is the one I’ll be coming back to. Your weapons in this mode are a reflection of what you have in the story mode, so that provides further incentive to make your way through that part of the game.

The game looks and sounds pretty great all around. The graphics are colorful and the characters are adorable, except for Charlie himself. The stage themes have completely new skins for everything, which makes for excellent variety in the visuals. The only way the graphics come up short is in that Charlie is the only object with a shadow. I’m not asking for complex shadows, but 3D platforming is sometimes a tricky business, and shadows can help the player gauge where coins are hanging or the height of platforms. The music and sound effects are good, and the main theme is very catchy. The enemies make a lot of cute sound effects, which I suppose helps drive home that they’re toys rather than monsters. I really don’t like Charlie’s voice, though. He’s a creepy old middle-aged looking guy with a ‘stache, but he sounds like he’s seven years old.

I feel like there aren’t that many 3D platformers of reasonable competence on the App Store at the moment. Like in the early 32-bit era, there’s room for quirky, flawed entries in the genre, and that describes Clash of Puppets pretty well. If you can forgive the padding in its level design, you’re going to get a lot of value out of this game. The story mode is long and throws enough novelty out in the form of equipment upgrades and new visual themes to keep things interesting, and the survival mode is a lot of fun. Just be ready for some seriously repetitive tasks within the levels and some disheartening setbacks at times if you choose to jump in on this one.