These days, there are so many games in the “naked guy riding a bicycle through an icy wonderland" genre that it’s hard for a new game to stand out. Wait, what? Rewind that. Okay, so the first impression Icycle: On Thin Ice ($2.99) is going to make on you is an extremely confusing one. I wish I could sit here and tell you that you’ll be less confused by the end, but I can’t do that, I’m afraid. This game is either full of wonderful symbolism or fortuitous random strangeness, and I can’t really decide which right now. What I can decide is whether or not to recommend this game to you. My decision: yes.

In terms of gameplay, there’s nothing really unusual happening in Icycle. It’s another side-scrolling game where you have to navigate obstacles with a fairly limited range of actions. Our hero Dennis can roll along on his bicycle in forward or reverse, jump, and, in mid-air, open an umbrella to slow his descent. The stage count isn’t terribly high, numbering just 20, and the levels are often quite short. You can easily finish a playthrough of the game in a single sitting. Actually, I insist that you finish the game in a single sitting. The stages flow naturally from one to another, and the overall experience works best if you go from the very beginning to the end without stepping away to do something else. 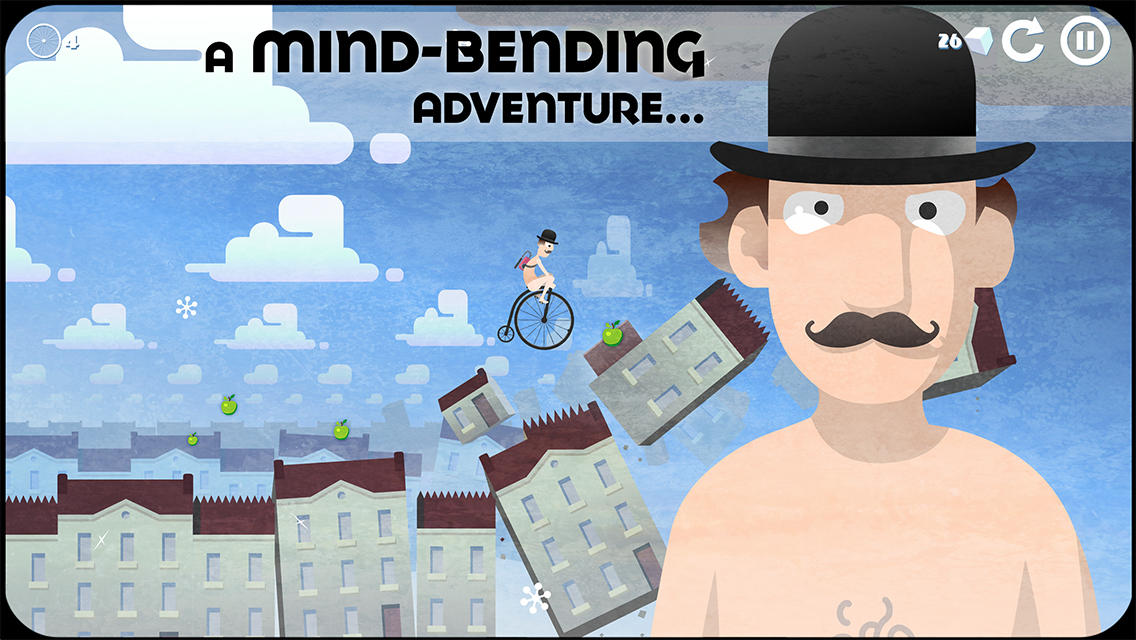 You’ll play as Dennis, a man poorly equipped to handle the environments he needs to traverse. He rides a bicycle, almost completely in the buff. He travels through various environments that all share a few common elements. They’re all cold, lonely places that seem to come apart rather easily in Dennis’s presence. Ice cubes are scattered throughout the stages and serve as the game’s currency, allowing you to purchase upgrades, accessories, and other useful items from the shop. One nice point is that you can buy just about everything with the currency found in-game, even the currency doubler. The one exception is the unlockable version of the original Flash game, which can be earned by completing every challenge in the game or unlocked with some real money. In addition to that, you can also spend real money to buy some ice if you’d like.

What makes the game special is the story it tells organically through play. It’s an interesting story about love told in a very non-obvious way. Exactly what it’s saying about love is a bit mysterious and I think different people are going to interpret different things from it. It’s incredibly abstract and weird at times, but in the end it does a good job of coming back around to a point of sorts. The great thing is that not only is the game full of symbolism, it incorporates it into the gameplay creatively. A small platform, perhaps representing the simplicity of a new relationship, quickly grows into a massive, sometimes lethal, but ultimately beautiful crystal formation. Or maybe it’s just a pretty crystal and I’m overanalyzing it. I leave that one up to you. 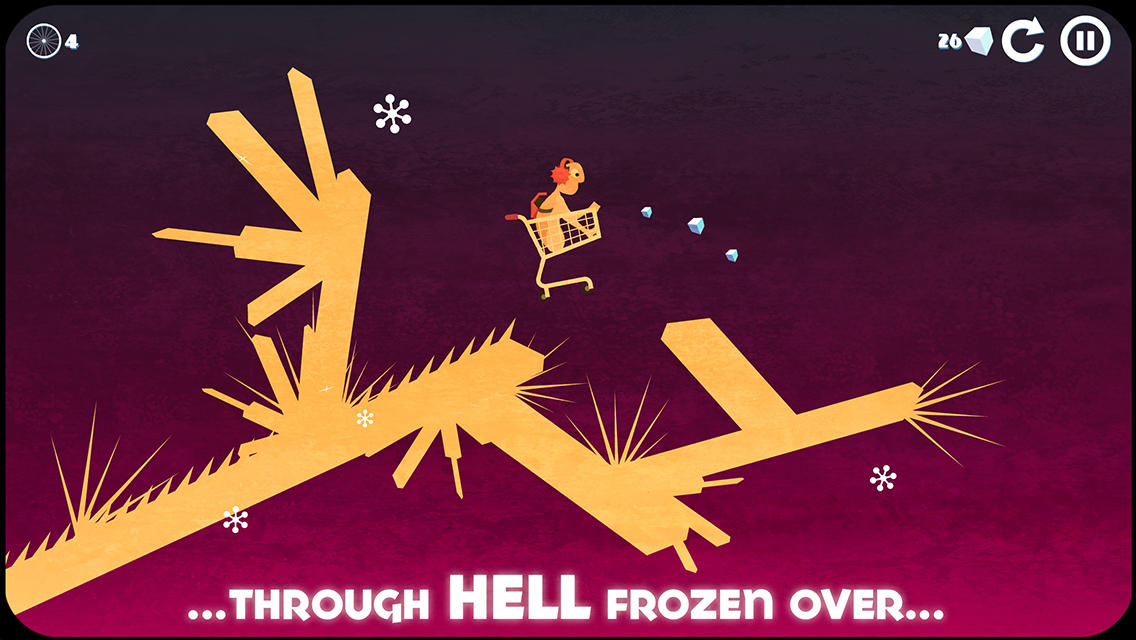 The levels are amazing. They’re constantly changing around you, pushing you in one direction or another, and sometimes back and forth, up and down, with just enough warning signs and cues to keep you from dying unfairly. You’ll be rolling, falling, flying, floating, pedaling with all your might, and climbing for everything you’re worth. There are few opportunities to catch your breath, because things are constantly in flux. Luckily, the stages are mostly on the shorter side, so you can take a minute to think about what you just went through before moving on. Overall, I’m very impressed with the level design. With this much chaos, it would be easy for the correct path to be hard to spot, but clever use of graphical flourishes and ice cubes provide you a roadmap you follow without even realizing it most of the time. On top of that, it always feels like you just made it by the skin of your teeth, which makes every stage feel dramatic.

If you were only going in for one playthrough, Icycle would probably feel a bit light, but there are good incentives to play the game again. Each stage has three extra challenges beyond simply clearing the level. They’re all individually tailored for each stage, and either encourage you to play in a unique way, such as collecting very few ice cubes, or fill out your inventory of unlockables, by asking you to put together a certain outfit, for example. Sometimes figuring out what you need to do for the challenge is the trickiest part of it. It reminds me of Super Mario 64‘s sometimes vague star goals. It’s fun to figure out these little mysteries, and they go well with the more challenging skill-based objectives. There is a reward for clearing all of these challenges, which is the unlocking of the original Flash-based Icycle, but that’s just gravy. The challenges are rewarding in and of themselves. 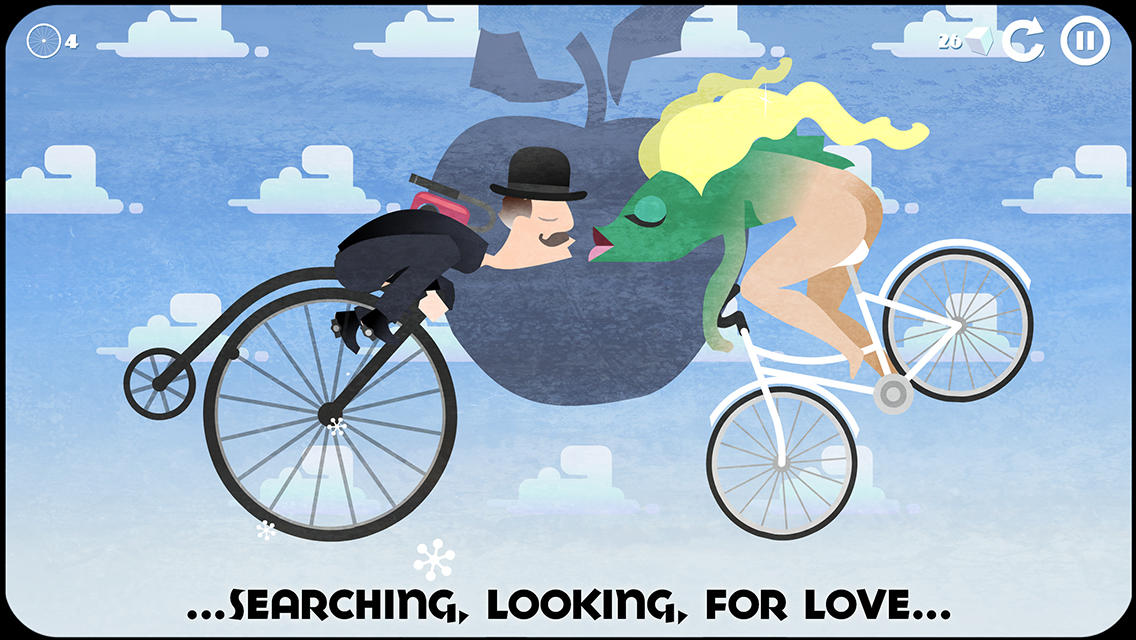 The graphics are sharp and striking. Lots of flat colors and a very clean vector-style serve the dual purpose of making the game look great and making design elements stand out. The music is sparse and always appropriate, but the game often goes with minimal or no music to reinforce the feeling of isolation. At these times, you mostly hear the sounds of your bicycle along with whatever is crumbling around you. It’s very effective. The UI is of the minimalist variety, though it’s perhaps too much so at times. In Icycle: On Thin Ice, you have a limited number of lives per stage. If you run out, you can choose to spend some ice to get another life, or give up and go back to the start of the stage with a full stock. On this continue screen, it’s far too easy to accidentally spend your ice, since touching almost anywhere while the timer is counting down will revive you.

The game controls really well. It uses virtual buttons for left and right, with an extra button that jumps when you’re on the ground and opens your umbrella when you’re in the air. The buttons are well-placed and of a good size, and there weren’t any oddities going on with the physics, as we sometimes see in rolling games like this, so controlling Dennis was never difficult. Well, okay, controlling Dennis on the bike you unlock by beating the game the first time is pretty tricky, but it’s meant to be.

Speaking of that, there are a couple of bonus levels in the game that you can play once you have the right equipment for Dennis. These levels ask entirely new things from the player compared to the main game, and my only regret with them is that there are only two. Apparently the developers are looking at adding more stages to the game, and I imagine they’ll go in here, since adding anything to the story mode would break up the beautiful trip they’ve put together there. The existing two bonus stages certainly veer towards the harder end of things, but it’s the kind of challenge that will keep you coming back until you win.

I’m not sure what else to say in this review, because I don’t want to spoil anything at all. Icycle: On Thin Ice is a wonderful game from start to finish, and one of those rare games that, as soon as I finished, made me want to discuss what it means with others. For the price, it’s a slamdunk purchase, and if you don’t want to take my word for it, check out the thread in our forums. I love it as a story, a piece of art, and most importantly, as a game, and if you give it a shot, I’ve got a good feeling you will, too.