Endless runners can satisfy a certain kind of itch every so often, but sometimes, I want structure. With a level-based system and endless runner-like qualities, AdvenChewers ($0.99) is a modest compromise of both formulas, and ends up offering an extremely addictive mixture of the two.

Told through the tale of a young boy who dreams of flight, on his quest to save his father from the nefarious General, AdvenChewers feels like it could be a Saturday morning cartoon. The setup is simple, to the point, and never once did I feel like it was overstaying its welcome. While the bright and vibrant colors look great on an iPhone 5, they sing on an iPad, and I was immediately enamored by how endearing the art style was. Whoever designed this game really knew what they were doing, as the bright style never feels too imposing. The soundtrack compliments the game well, as do the cartoony sound effects. 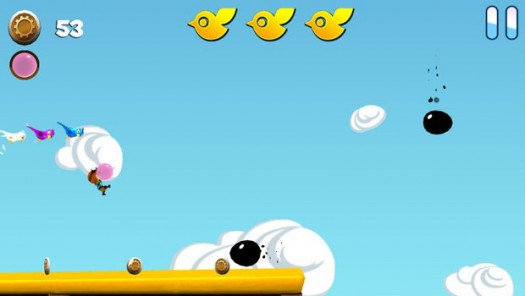 Like most runners, the formula is still the same — you’re automatically galloping from left to right, with the ability to jump to avoid gaps. But where Chewers modifies this scheme to its benefit is the ability to blow bubble gum and float up into the sky. To be blunt, the controls work masterfully here, with a simple tap to float mechanic. Every nuance of tapping and slight tap-canceling to quickly drop is immediately apparent. It’s during these sections that controls need to work perfectly, as you’re navigating tight-knit spaces and other hazards. Instead of being forced to fly or run constantly, you can switch between the two at will and bend the game to your liking.

But if it was just jumping and gliding, AdvenChewers would get pretty old after a while, so that’s where the different gum types come in. I’m talking mechanics like the offensive based spark gum that can destroy enemies, or the soap gum that fights off sticky goo hazards. With nine gum types in all, it’s easy to switch strategies on the fly to suit your playstyle. Level layouts change drastically as well, lending themselves well to the vertical design of the game. With tons of places to explore both low and high, stages never feel repetitive, or copied and pasted from previous designs. The game never really reaches its potential apex in terms of a challenge, but the key takeaway is that it’s still fun nonetheless.

For all the completionists out there, there are three birds to collect in each stage, as well as phoenix feathers (which summon an temporary invincible ride), and coins to buy upgrades and new equipment. Almost every level has branching paths, so re-doing the same stages can yield new discoveries, or attempts for more efficient runs. Often times I found myself running along the bottom portion of the map, completing most of the stage on the ground level, and repeating the stage to see what was going on in the sky. With 48 levels to explore, Chewers has a lot to offer, and I never once felt obligated to purchase any IAP options. There are social options should you choose to use them, mostly just involving Facebook and friend linking, but you can ignore them if you want (thank goodness).

It might not blow (ha!) your mind if you’re tired of the runner genre by now, but AdvenChewers had enough heart and variety to keep me interested for quite some time. Far after you’ve completed the entire game and exhausted all of its ranking systems, you may find yourself jumping back in from time to time to see a prior stage in a completely new way — and that’s an accomplishment.