About a year and a half ago, NTT Resonant and ZigZaGame Inc. released Dragon Island Blue ($0.99), an RPG that was very heavily inspired by Nintendo’s Pokemon. Offering a huge roster of monsters and abilities, it nicely tapped into a few of the hooks of the famous franchise. There were lots of reasons to like it: the joy of collecting as many creatures as you can, building a team that’s all your own, the tension of trying to whittle down the enemy’s life without killing them to ensure a capture. However, while it got some things right, there were other ways it didn’t fare quite so well. It was a really ugly game with really poor visual consistency. The spread of creatures looked like random clip art gathered from a variety of artists. The quest itself was kind of limp, with most of the focus being on the monster-collecting. Still, it was a fun game, but the sort of fun game that was begging for a good follow-up.

Luckily, this isn’t one of the many cases of games like that never getting the refined sequel they need. Hunter Island ($0.99), a spiritual successor to Dragon Island Blue, brings forward everything fun from the original, fixes up a lot of the major problems, and adds a few new wrinkles. This is one of those sequels that doesn’t stray too far from what worked the last time, but does a much better job of presenting it all around. No, it’s not Pokemon. I regret to say we are probably not going to see a full-sized, full-budget Pokemon-style adventure for a dollar anytime soon. It does, however, hit a lot of similar buttons, so whether you have fond childhood memories of Pokemon Red/Blue or you just want something to play on your phone while you’re between sessions of Pokemon X/Y, I think you’ll be happy with what Hunter Island is offering. 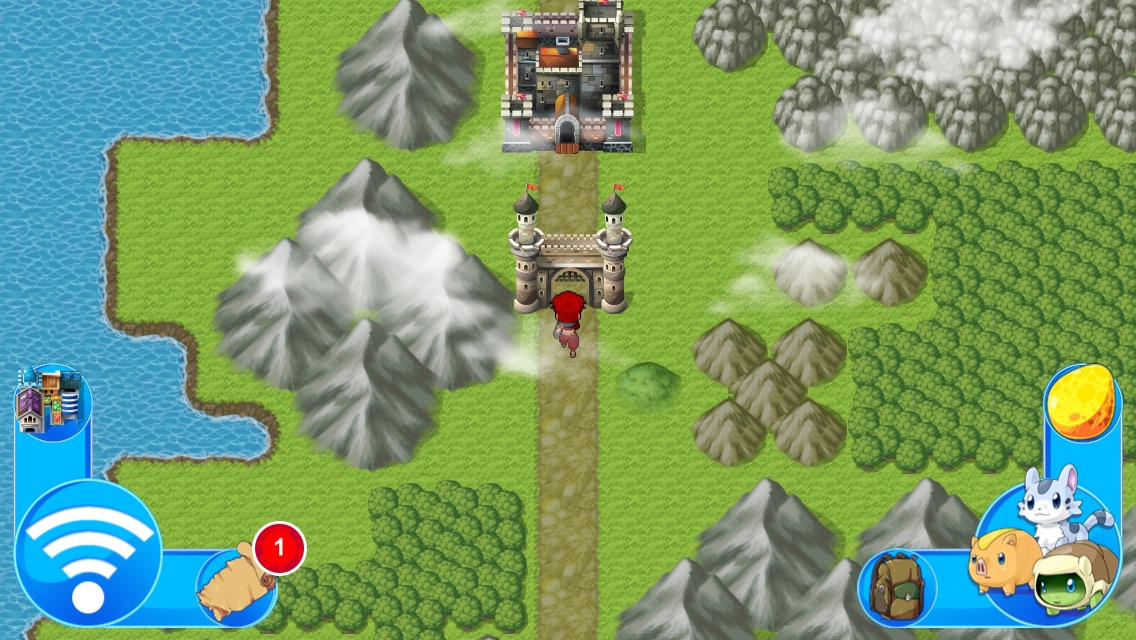 The first order of business I want to talk about are the graphics and art improvements. Normally, that’s not something I would lead with, but Hunter Island is night and day when compared to its predecessor. The game has an actual consistent visual style now, and the monster designs are not only excellent and varied, but now look like they belong to the same game. The overworld and towns look a lot better, too. Sprites don’t look quite so much like they’re pasted on to the backgrounds, and the map version of your character actually resembles the character art this time. Battles still lack animations, and that’s something I hope the developers try to implement in future games, but hey, it took Pokemon almost 15 years to get that far, so I’ll try to be patient here. The point is that this is actually a pretty good-looking game for a 2D RPG, and that’s not something I ever expected in a million years coming from the people who made Dragon Island Blue. 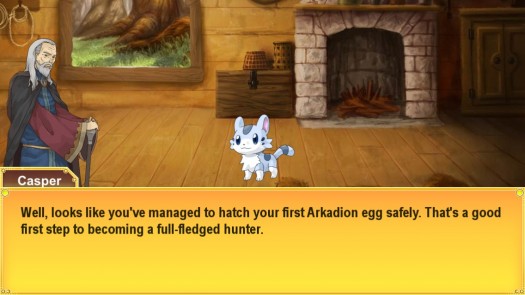 As for the gameplay itself, there isn’t a whole lot different here. One difference, cosmetic though it may be, is that you can choose between a male or female character, with the other being designated as your companion in the story. This is an option I always like to see in RPGs when the story allows for it, so I’m happy to see it in here. After choosing your gender, you can choose a starter monster from one of the four basic elements of the game: wind, fire, water, and earth. Unlike the first game where you were just picking from four different-colored dragons, the starters in Hunter Island are quite different from each other.

From there, you’ll fight your first battle, which plays out like the battles in the previous game. It’s a turn-based system where each of your possible actions take a particular amount of time units to use. This will determine how long it will be until that monster gets to take its next turn. Turn order of both your team and the enemies is displayed on the side of the screen. At any given point, you and the opponent can have three monsters each in play, with defeated or otherwise incapacitated monsters being swapped out for the next one in line on the active roster. If your whole party is wiped out, worry not. You’ll respawn at the last town you visited, with absolutely nothing lost.

The overworld maps are still traversed by touching various points marked by arrows. This is where you can randomly encounter wild monsters which you can catch. Use your monsters in battle to reduce the enemy HP, which improves your chances of being able to capture it. You have three different options for capturing the critters. You can spend a little silver, a lot of silver, or some gold, each with increasing odds of successfully capturing the monster. Silver is easy enough to come by but not so easy that you’ll be wanting to toss a ton of it at every single monster, and gold is a premium currency with many other uses, so treat it like a Master Ball. One small but appreciated change is that even if you capture the monster, you’ll still receive experience points at the end of the fight. Anything that cuts down on meaningless grinding is great in my books. 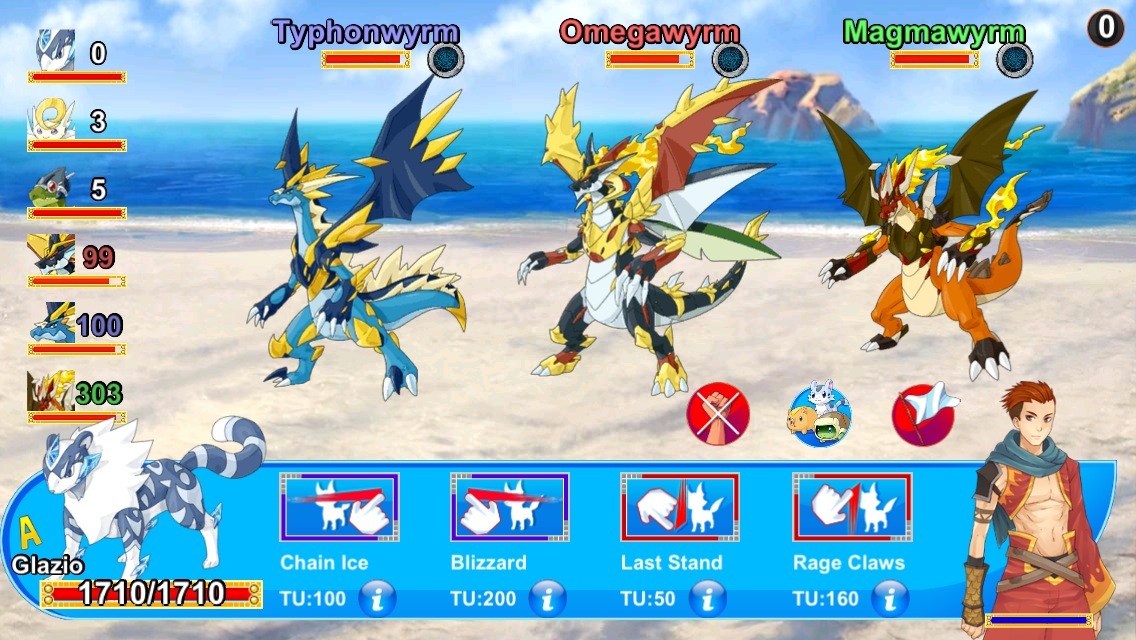 Hunter Island has more than 350 monsters to collect, far more than the first game had. There’s an extra layer added to the collecting this time, too, because each monster has a grade ranking from E to S. The higher the grade, the more frequently the monster is able to attack, and consequently, the more powerful it is. For OCD hunters, this is something of a nightmare, I imagine, because not only do you have to collect all the monsters, but you have to find S versions of all of them. I wasn’t too concerned with it, but one thing I do wish is that I could see which rank of the monster I’ve already caught when I’m in battle. Monsters are marked to tell you if you have them or not, but you have to remember if the one you’ve already caught is better than the one in front of you. If you aren’t the type of person that needs to find the best specimen of everything, you’ll find the old university slacker slogan applies pretty well here: Cs earn degrees. You won’t have trouble making your way through the game even without having a full team of S ranked monsters.

You’ll also find towns and caves on the map. Towns have many purposes, of course. Your monsters are automatically healed when you enter a town, and you can change your active roster here, too. There’s also an item shop that sells various goods for both silver and gold, a tavern where people offer advice and hints, a guild where you can pick up sub-quests and take rank tests, an arena where you can do battles once a day to earn prizes, a teleporter that can take you back to any town you’ve already visited, and occasionally NPCs that give you rewards for certain achievements. Most of the story progress happens in these towns, though like its inspiration the main story of this game is a serious afterthought. There’s certainly more plot here than in the first game, but it’s really hard to care about it. But hey, progressing the plot opens up new areas with new monsters, and that’s really what this is all about, isn’t it? 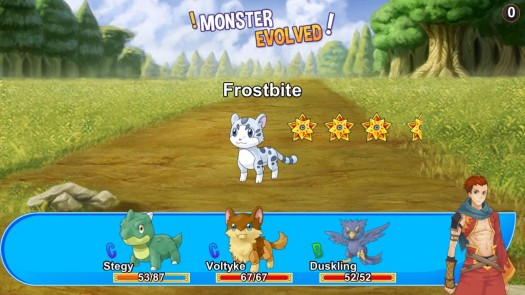 Caves are the closest thing to a dungeon you’ll find in Hunter Island. You can travel from room to room by touching them, and you’ll occasionally find a treasure chest, a battle, or both waiting for you. It’s a nice way to find some unusual monsters and rack up some extra silver, and many sub-quests require you to explore the caves. The layouts are very simple mazes, and there aren’t any interesting gimmicks going on with them. There is an endless cave, like in the first game, if you really want to test how far you can go. It’s a nice little extra, and thanks to Game Center support, you can see how you fare against other players.

The Game Center support in this game is really good, actually. Every time you catch a monster, you’ll get a little banner telling you what your completion percent is, which is a nice little Pavlovian reward for catching something new. You can also do online battles through Game Center, which is another pretty big addition to the game. In the online battles, you choose your team and take a max-level version of them into battle with another player. The matchmaking doesn’t seem to take your strength into account, though, so lopsided fights are pretty common. Win or lose, you’ll earn some points towards your online ranking, though, so losing doesn’t sting too badly. This was one of the major pieces missing from Dragon Island Blue, and I expect fans of that are going to be pretty happy to see it.

Hunter Island does everything a good follow-up should. It clearly addresses the faults of the original, to various degrees of success, while still doing what it was doing well already. I still think there’s a lot of room for improvement, especially with regards to freedom of movement on the world map and in caves. The story, while better than before, is still barely there and not very interesting at all. That said, the core experience, collecting and battling monsters, is done very well here and makes the game quite compelling as a result. I really like how this is both a very long game (about double the length of the average Kemco RPG) yet still very much a pick up and play experience. If you’re looking for an accessible RPG that’ll give you a lot of bang for your buck, give this one a look.