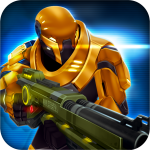 Playing Doom for the first time is one of my fondest childhood memories. It sounds odd, playing such a violent game at such a young age, but Doom really helped shape my gaming habits for years to come. It wasn’t my first FPS strictly speaking, but with simple gameplay, tons of weapons to choose from, and a labyrinthine set of maps, it was one of my favorites. Neon Shadow (Free) attempts to recreate that classic feeling, and even though it may not fully succeed, there’s still a great deal of love involved in this letter.

This is a straight retro FPS, plain and simple, with mild exploration elements and easy to pickup gameplay. You’ll play the part of a commander who needs to regain control of a remote space station, as you battle the rogue AI that has taken it over — so odds are, you’ve seen this before. The plot is fairly bare-bones in nature for sure, but it works, as you’re basically diving right into the action in mere minutes. 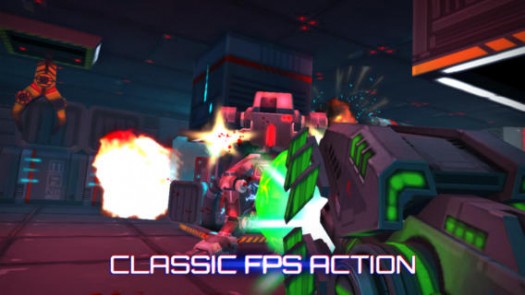 Neon controls in a typical manner in terms of touch screen FPS games, and the simple nature lends itself well to the scheme. Basically, all you have to do is use the left side to move, the right side to aim, and one on-screen button to fire. There’s no “auto-aiming" mechanic per se, but there is a “snap" method that works more often than not. Although I did have a few issues turning corners every now and then, it’s pretty easy to get around, open doors, and fire off your weapons when you need to.

The weapons actually feel substantially powerful, especially the ones of the more explosive variety. One of the best parts about the explosive guns in particular is that the splash damage typically eliminates the need for precise aiming — so you can generally just have fun blowing stuff up rather than relying on a touch screen interface to pinpoint baddies across the room. There’s no “wow" moment in the game’s arsenal like the first time you touched a BFG9000 in Doom, but it is a well rounded selection, nonetheless.

You’ll need that type of firepower too, as enemies look equally aggressive with a strong metallic theme to them, and are pretty relentless in nature. They tend to swarm you pretty fast if you don’t gun them down, but without feeling too cheap in nature. The team could have stood to add a few more varieties to the mix (and the “AI takes over" storyline has been done to death), but as it stands there’s a decent amount of variety to the proceedings.

Visually, the game has a Far Cry 3: Blood Dragon feel to it (hence the neon), and although it doesn’t look drastically different from other mobile FPS games, it has enough of its own identity to make a mark. The UI is extremely clean though, and I particularly like the old school avatar head in the top middle, as it’s a nice little touch that will appeal to old school fans of the genre. The soundtrack from Abducted by Sharks is similarly well done, and the electronic theme adds to the total “neon" allure of the game.

There’s a decent amount of game here for the low price, and on top of that, there are no IAPs to speak of. You’ll also be able to go fragging online with the game’s head to head multiplayer component. It’s as simple as it sounds, but it’s a nice diversion from the campaign should you find yourself bored after a few playthroughs. Also, there’s a unique same screen co-op mode (you’ll want to play this on a tablet), which is a nice extra, as it works for both co-op and competitive play. Multiple difficulty levels are also available for more casual or hardcore players, from “Rookie" all the way up to “Nightmare."

At the end of the day, Neon Shadow could have done a lot more with its concept, but it’s more than serviceable for any FPS fan. Although there’s no shortage of shooters on the mobile arena, this one is simple enough to not give you too much trouble control-wise, and it has its own personality to boot. In fact, if Neon Shadow ends up adding iOS7 controller support at some point, this will be a must own for anyone who plays FPS games on their mobile device.