Let’s start this review by going over exactly what the iOS version of LEGO The Lord of the Rings ($4.99) is. This is not a port of the console version, though its levels are drawn almost entirely from it. Instead, it’s based on the handheld version, which is unfortunately largely built around the limitations of the Nintendo DS. Yes, the DS, not the 3DS. Of course, this is the norm for LEGO iOS games going all the way back to LEGO Harry Potter: Years 1-4 ($4.99), but what makes it significant this time is that the console version had a lot of new elements that are nowhere to be found here. If you’ve only been following along with the iOS versions, then you know more or less what to expect from this one, and I think you’ll be more than happy with this abridged retelling of the films based on Tolkien’s novels. If you’re here looking for the console game on the go, though, that’s not what you’ll get here.

If you’ve played any of the previous LEGO games on iOS, this game is going to be immediately familiar to you. You’ll take control of every major character and quite a few minor characters and make your way through a humorous take on the film trilogy. There’s a little combat, a little light puzzle-solving, a little light platforming, and a whole lot of smashing everything to collect LEGO studs. As you play, you’ll unlock new characters which you can then take back into Free Play versions of previous levels to uncover secrets. Previous LEGO games on iOS have had a hub from which levels were selected and shops were accessed, such as the Batcave in LEGO Batman: DC Superheroes ($4.99). LEGO The Lord of the Rings has several interconnected hubs based on how far you’ve progressed in the story, including the Shire, Rivendell, and so on, each with some studs to collect, a few hidden items, and a shop that sells the same things no matter which hub you’re in.

The LEGO series is a bit long in the tooth now, so it’s no surprise the developers went a slightly different route with the console version of this game. Each of the various characters could find or create items, keeping a running inventory of tools you could access at any time. This mechanic has been stripped out of the handheld versions, so what you get instead is several versions of each character. As you come across new items that are required to solve puzzles, you’ll unlock a new version of the character, generally more capable than the previous version, but sometimes missing an ability they had before. Almost all of the non-essential equipment has been cut from this version, so things like weapon-switching are out. Legolas does get his upgraded bows, but he never gets a melee attack in this version, for example.

The other stated goal of the developer for this one was to cut back a little bit on the humor typically associated with the LEGO games. That aspect has come through to the iOS version without a hitch. While there are still plenty of moments of comedy (or attempted comedy), the tone is altogether less wacky than previous games. This may have been necessitated by the voicework. Like LEGO Batman: DC Superheroes, this game is fully voiced. Unlike that game, LEGO The Lord of the Rings has very little in the way of original voice work. Aside from a few lines here and there by bit characters, almost all of the dialogue in the game is taken directly from the movies, along with any other sounds going on in the background of the lines. Given the size and fame of most of the cast, I can understand why they couldn’t get everyone to come in and re-voice their characters, and sound-alikes probably would have been worse, but it does hurt the quality of the audio. The voices all sound like someone just recorded them off their TV.

Of the LEGO games based on movies, some have fared better than others in terms of retelling the story coherently. These games are clearly intended for fans of the properties in question, so a certain amount of familiarity with the source material can probably be assumed, after all. LEGO The Lord of the Rings‘s story is almost impossible to follow if you haven’t seen the films, mostly thanks to the fact that a handful of levels and scenes have been cut from this version. It’s not really a big deal, though, because you’ve almost certainly seen the movies anyway. Most of the important scenes are represented, though my favorite line didn’t make the cut. In terms of balance between the films, they’re represented with around a 40-20-40 ratio. The Two Towers got a bit of a short shrift here, but you get Helm’s Deep, so what else matters? 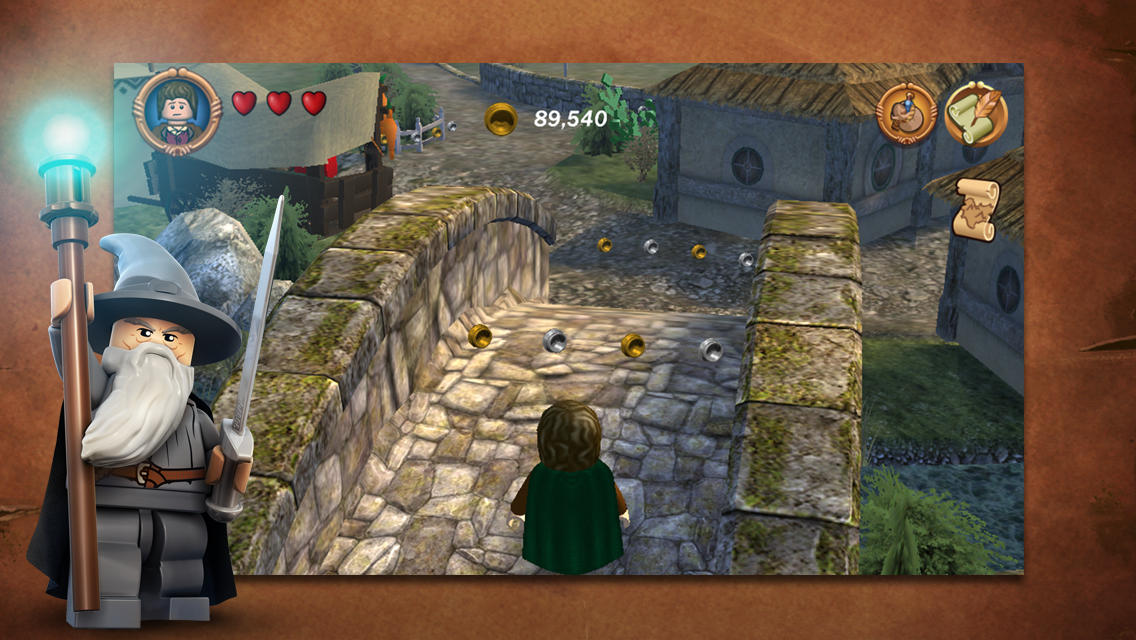 Everything else here is more or less the same as ever for the LEGO games. You can choose between virtual controls and touch-based casual controls, and both have their usual problems. The virtual controls cluster too many small buttons too near each other, and the casual controls make combat an irritating chore and occasionally lead to walking off cliffs. There are plenty of unlockable characters, though the minor ones need to be bought with studs, and unless you pop for a multiplier, grind a lot, or purchase them outright, you’re going to be hard-pressed to get them all. Like previous games, the camera work is occasionally frustrating. You shall not save mid-level, so don’t start playing unless you’ve got enough time to see a full level through. The length of the game is about the same as LEGO Batman: DC Superheroes, which interestingly means a playthrough of this game takes less time than watching the movies it’s based on.

If you haven’t had enough of the LEGO games yet, LEGO The Lord of the Rings will satisfy you. It brings the familiar LEGO gameplay to yet another beloved franchise, with all the care and cheek you’re used to. If you’ve had more than enough of the LEGO games by now, this game isn’t going to change your mind. Rather than being an attempt at shaking up the status quo like its console big brother, this version is more than content to throw another burger on the grill, this time with Middle-Earth seasoning.