There are some franchises in gaming that are so well-known and revered that almost every gamer has played at least one: Super Mario, Sonic the Hedgehog, Final Fantasy, Metal Gear, The Legend of Zelda, and so on. While iOS gamers have seen some of these series come to the mobile platform over the years, the franchises that belong to first parties, and Nintendo in particular are locked down pretty tightly on their home platforms. It’s understandable, but iOS gamers still want these types of experiences, and various developers have tried to fill the holes as best as they could. There are lots of attempts to fill the demand for Mario, but just like on consoles, relatively few make a serious attempt at imitating The Legend of Zelda.

It’s not hard to see why: Zelda games are a fusion of action and puzzle solving, famous for their large overworlds sprawling with huge dungeons and secrets. They’re also well-known for using items as a means of directing the player along the intended route, and that style of design takes a lot of work through the whole process to make sure nothing’s broken. It’s a big project for anyone to undertake. Which is not to say nobody has tried and succeeded to various degrees, but we’re hardly swimming in competent Zelda clones. So how does Ittle Dew ($1.99) measure up? Well, the answer is in the title, I suppose. 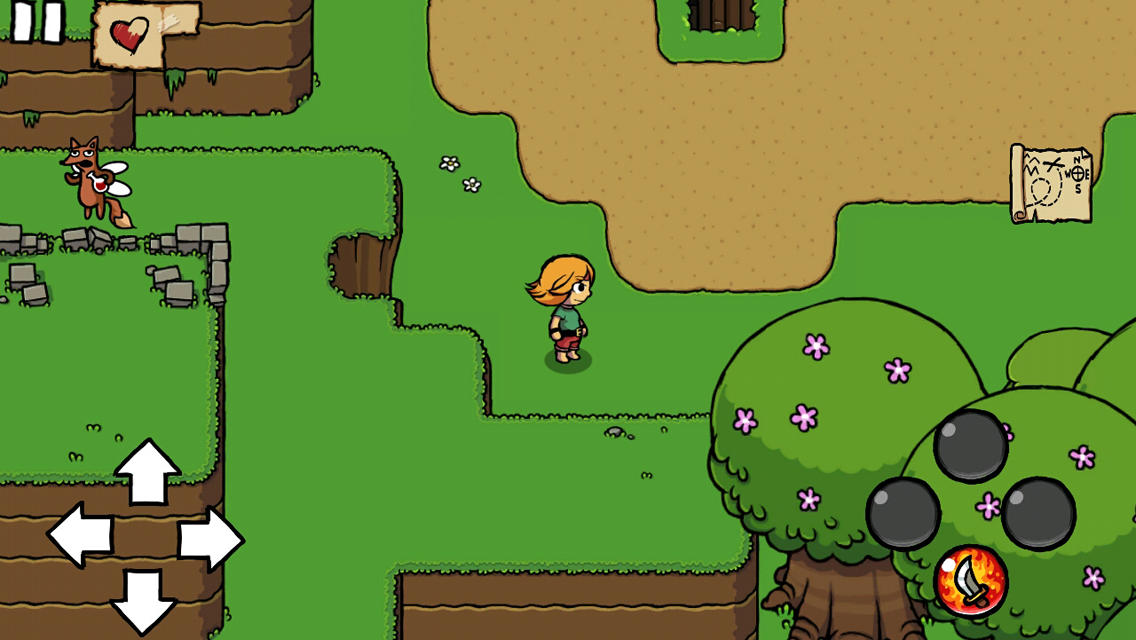 Ittle Dew follows the story of an adventure-loving girl and her companion, a flying weasel-type thing who’s constantly chugging “health potion". She’s sailing the seas, as adventure-loving heroes are wont to, when a storm shipwrecks her on an unfamiliar island. Armed with nothing more than a stick, she needs to find a way to get off the island. The story is pretty lighthearted and isn’t ashamed to homage and poke fun at its inspiration. I actually laughed a couple times during the game, like when Dew first meets a couple of familiar-looking statues in a castle. There’s just the right amount of story and dialogue for this type of game, which is to say very little, but what’s here is pretty well-done.

As I mentioned before, the Zelda games are a fusion of puzzle-solving adventure and action. This game leans more on the former than the latter, which is good, because the controls just aren’t up to handling much action at all. Ittle Dew originated on platforms with buttons, and while many games have overcome the transition to touch controls with grace, this one doesn’t. You have your choice of virtual controls and gesture-based controls, but I don’t have anything nice to say about either one of them. The virtual controls are convenient for giving you easy access to Dew’s items, but the directional pad is awful so moving around can be a bit of a chore. The gesture controls make it easy to move Dew around by sliding your finger around, but the gestures to access her items are awkward, to say the least. So, choose your poison, but either way, you’re going to find combat a chore.

So you can see why it’s for the best that combat is pretty much left to the sidelines here. Sure, there are enemies and you will sometimes have to kill them, but you’ll be spending most of the game solving puzzles. Ittle Dew‘s puzzle of choice is the trusty old block-pushing puzzle. Generally, you’ll be manipulating blocks in various ways to get them on top of switches, which will open the door to the next room. There are a few other types of puzzles, but this is the bread and butter of the game. The other puzzles include such staples as lighting or snuffing torches, bombing blocks and walls, and the decidedly non-puzzley killing all the enemies in the room. 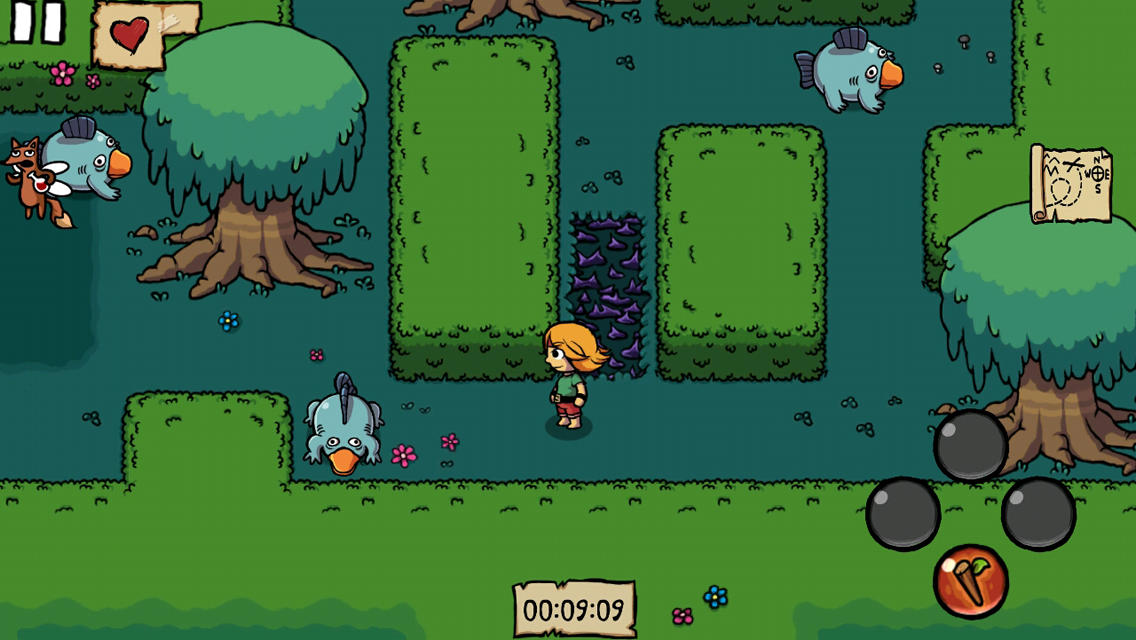 The bosses, too, are puzzles, though they are aggressive ones. In true Zelda fashion, however, whichever item you most recently picked up will be the key to killing them, so as long as you’ve familiarized yourself with everything your new item can do, you shouldn’t have too much trouble. If you do, your little flying weasel friend, Tippsie, can be tapped for the solution. The bosses are fun to figure out, but the control issues make them a bit annoying at times, depending on how quickly you need to do whatever it is that will kill them.

It’s not a terribly long game, even if you dedicate yourself to finding all of its collectibles, but you will get a few hours out of it at the very minimum. There are three smaller dungeons where you find your items and one very big one where the bulk of the game takes place. There are also numerous puzzle rooms scattered around the small overworld, each containing either a piece of paper that you can tape to your life bar to extend it, or a trading card, which feature the enemies and some flavor text on them. Personally, I was pretty satisfied with the length. New mechanics are introduced frequently enough to keep things interesting and fresh the whole way through, so there aren’t really any dead stretches in the pacing.

I enjoyed how colorful and well-animated everything is in this game. It’s a real looker, and while it doesn’t match them in sheer quantity, the actual quality of each visual element often stands on par with Nintendo’s own sprite-based Zelda games. I love the expressiveness of the art style, with the faces of characters telling a whole story on their own. It’s got more than a hint of Windwaker‘s art motif to it, but feels different enough to avoid feeling like a rip-off. All the right lessons were learned from that unique style.

Control issues aside, Ittle Dew is a pretty great little puzzle adventure. The pacing is great, the puzzles are challenging without going too far off the deep end, and every little bit of it is oozing with quirky charm. It’s a shame it doesn’t do service to the action side of Zelda as well as it does to the puzzle side, but the emphasis on puzzles in the design shows the developers are aware of where the game’s strengths lie. It may not be quite up to the lofty standards of its inspiration, but for fans of adventure games… read the name of the game.