We often see the case of a game from a genre well-realized on consoles, dedicated handhelds, or PCs releasing on mobile. Sometimes, we even see these games make their way over to the platforms where their genres were born or popularized. For example, Chaos Rings ($6.99) is a JRPG, a genre popularized by consoles, that was released on mobiles first, and then eventually making its way to the Playstation Vita. It’s considerably more rare, due to the relative youth of the mobile platform, to see a game from a genre popularized on mobiles release on consoles. Such was the case with Bit.Trip Runner, an auto-running game released for Wii, with later releases on 3DS and Steam. With the release of the sequel, developer Gaijin Games decided to really go big, putting the game out on pretty much every platform under the sun including, in a slightly modified form, iOS.

Bit.Trip Run! ($2.99) is a port of Runner 2: Future Legend of Rhythm Alien, given a new title presumably either because the first game was not released on iOS or perhaps to reflect that this is a slightly different game than the other versions. Quite a few things had to be altered to make the transition to pure touch controls. Although it’s basically a stage-based auto-runner, Runner 2 used quite a few buttons. Commander Video, the hero of the game, has many different actions, using every direction plus multiple buttons, something that obviously wasn’t going to work as-is on mobile. A few things had to be simplified to even make it doable, and even then, as I’ll go into a little later, things didn’t turn out perfectly peachy. 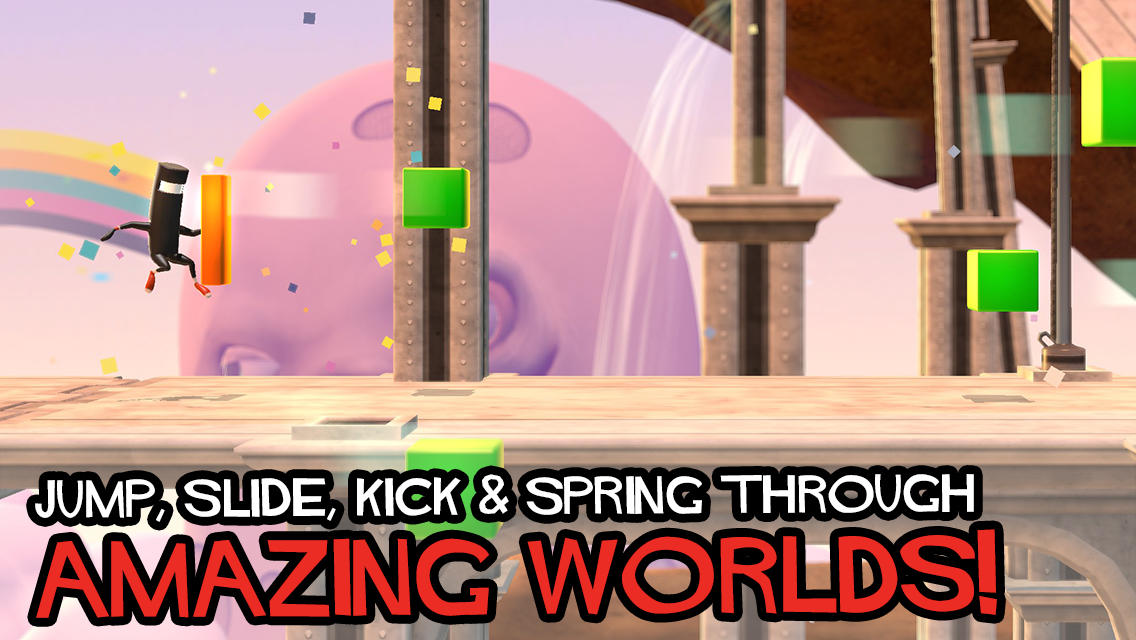 Chances are, if you’re familiar with the Bit.Trip games, you know they stand for three things: simple, rhythm-based gameplay, extreme difficulty, and 8-bit visuals. Bit.Trip Run! keeps one, tones down another, and tosses the last, for the most part. In terms of gameplay, it’s just as simple as ever. Guide Commander Video through each stage, jumping, sliding, and otherwise avoiding obstacles while trying to grab all of the gold scattered around. The game gradually introduces new obstacles and the means to pass them, going from simple hopping exercises to very complicated sequences of actions before you even notice. The stages are grouped into worlds, and at the end of each world, you’ll face a boss. Presently, only three of the five worlds found in other versions are available, but Gaijin Games are promising a free update with the others soon. Still, with 30 regular stages and almost as many unlockable ones, there’s quite a lot here as it is.

The simple 8-bit visuals seen in previous games in the series have been jettisoned in favor of fluidly-animated, absolutely gorgeous polygonal graphics. Each of the three different worlds are visually distinct, with deep, vibrant backgrounds full of rich colors. I love the look of the game, but one negative point of these more complex visuals is that it’s occasionally hard to spot the obstacles thanks to the busy backgrounds. The first world in particular is bad for this, thanks to its muted pastel palette. If you’re truly pining for some retro charm, many of the unlockable stages are done up in a NES-like style, but be warned, they play by harder rules than the normal stages.

One of the defining elements of the original Bit.Trip Runner was how hard it was. The stages were pretty long, and one mistake would send you packing back to the start with nothing to show for it but a little knowledge and a wounded pride. For some gamers, that was part of why they loved the game, but for others, it meant a lot of the game was a test of frustration. Gaijin Games apparently heard the gripes, because the sequel packs a nice little checkpoint into every stage, meaning one little mistake can only cost you up to half the stage now. On top of that, many of the stages now contain branching paths, clearly marked according to their difficulty. Finally, the sequel offers multiple difficulty settings that you can adjust between stages. With these tweaks to the challenge, just about everyone should be able to experience the whole game, while still leaving in plenty of old-school bite for those who want it. 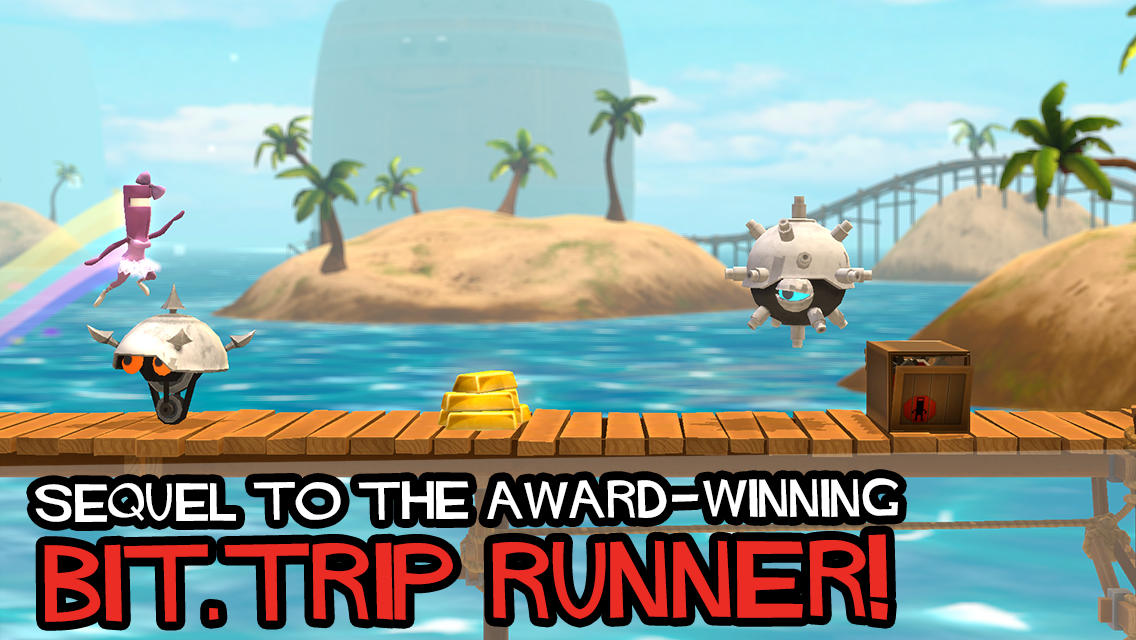 There’s plenty of unlockable stuff, though the means of getting it is one of the ways the iOS version differs from the others. In the other versions of the game, you needed to find keys and unlock chests, often involving taking the hardest route through stages. In the iOS version, you need only exchange the gold you’ve picked up to unlock all of the stages, characters, and costumes. I’m not really sure which approach I like better. It’s nice to let everyone have a crack at the extra content regardless of skill level, but it’s also good to have some incentive to go for the more difficult routes rather than just challenging oneself. At any rate, you’ll be able to unlock tons of levels, several bizarre characters, and a pile of costumes, and absolutely none of it is behind an IAP paywall because, hey, there isn’t any IAP at all.

The biggest difference is, naturally, the control setup, with plenty of level alterations to try to accommodate the new controls. Jumping is performed by a tap on the screen, sliding is done by swiping downwards, blocking and kicking are assigned to the same swipe-right motion, dancing is swipe-left, springs are automatic, and the loop-de-loops and box obstacles are a button you just have to tap. The slide-jumps and slide-kicks have been cut altogether, which is probably for the best. It’s as good an effort to map things as one could hope for, but there are still some problems. Since obstacles come fast and furious, it would be very hard to tap the screen as fast as is occasionally necessary, so the developers have lightened the load a little by adding a lot of auto-jumping pads to the levels in places where consecutive jumps would be required. Additionally, many of the levels have been redesigned with obtacles rearranged to make things a lot more forgiving.

It’s very clear strong efforts have been made to make this work, and it’s mostly a success. I sometimes had situations where a swipe was read as a jump, to fatal results, and jumping doesn’t feel quite as instant as I’d have liked. The 8-bit unlockable levels, designed with considerably fewer crutches than the normal stages, powerfully demonstrate the drawbacks to the touch controls. Still, it’s a wonder such a hectic game that originally used so many buttons came out this well. 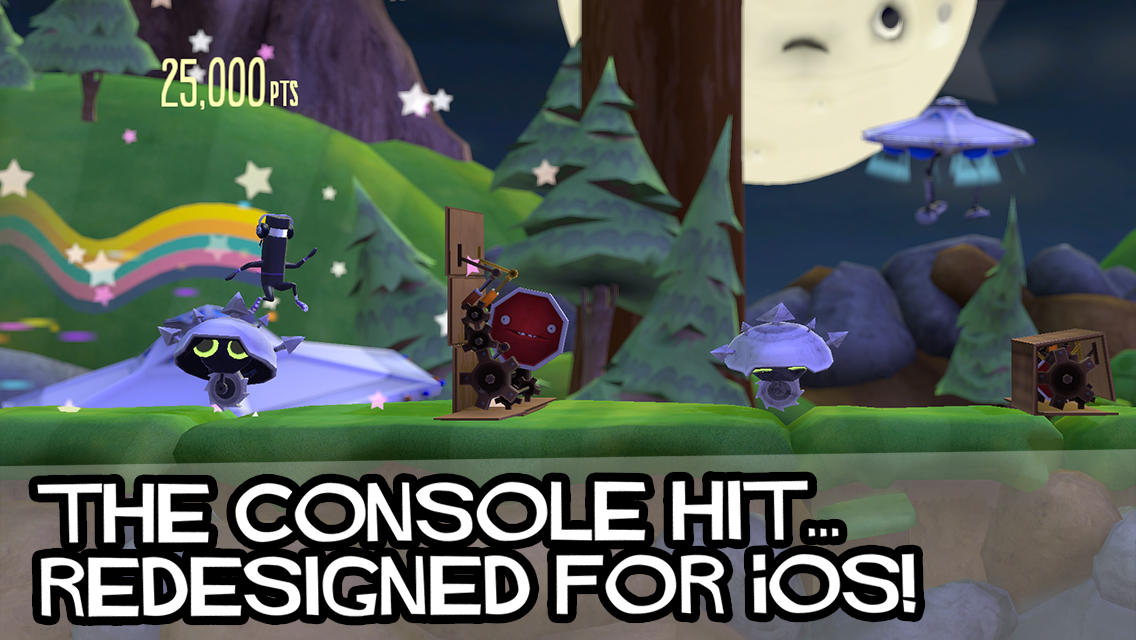 So, it’s an excellent sequel, and a pretty good port, but with so many runners on iOS, how does it fare compared to the competition? Quite well, I’d say. First of all, in terms of production values, it’s incredibly slick. The game is beautiful, polished, and naturally has a great soundtrack. Brief cut-scenes, narrated by Super Mario himself, Charles Martinet, introduce the game and each stage. It’s a game that’s designed to be beaten through practice and skill, with no designs whatsoever on enticing you to pick up IAPs, which sets it apart from most of the auto-running games available. While many runners start off dead simple and work their way up to near-impossible, Bit.Trip Run! has a very smooth and fair difficulty curve. When it reachest its most hectic points and the deaths start to rack up, it still never feels unfair.

A lot of that is owing to a lack of random elements, preventing the kinds of accidental no-win situations that come up in many runners. The lack of any random aspects cuts down a bit on replay value compared to other games in the genre, but with branching paths, loads of unlockables, and a lot of room here for finesse play to achieve higher scores, there’s plenty of incentive to tackle stages repeatedly.

Its console origins make it feel somewhat unique in the iOS runner pool. The design reflects the sensibilities of that market, making for something more mechanically complex and carefully laid out than we usually see in this genre. I’m never happy to see big coming soon signs in lieu of a proper ending, and the packed-to-the-bursting-point controls can cause frustrating let-downs, but on the whole, I think Bit.Trip Run! accomplishes the somewhat lofty goal of being a worthy premium-priced entry to a genre with no shortage of great freebies.