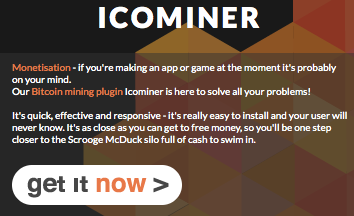 There’s no doubt that the App Store is trending towards free to play, and has been for years now. Just a quick glance at the top grossing will show the first game with a price tag associated with it is Minecraft ($6.99) at #50. As the free to play world gets more and more crowded, developers have been forced to find new ways to squeeze money out of their user base, and this morning we stumbled across what is easily the most ridiculous free to play scheme we’ve seen yet: Turning your players into a bitcoin mining botnet.

If you’re not familiar with bitcoin, I don’t really blame you. It’s been a bit of an underground internet currency that’s big use up until recently has been to buy drugs online and for currency speculators to go hog wild with. As a total unregulated cryptocurrency its value has been incredibly volatile and between startups raising money to make bitcoin mainstream and a guy who forgot he bought bitcoins and now discovered he’s rich, bitcoin is at the forefront of the news cycle once again.

Unity plugin developer Icoplay has decided to capitalize on the relative hotness of bitcoin right now by releasing the Icominer plugin. Per an editorial piece over on PocketGamer.biz by Icoplay’s Simon Hill, the Icominer plugin is easily dropped into any Unity project. Here’s the dream they’re selling:

A developer installs the software, and every instance of its game running at any time, anywhere mines Bitcoins using the latent power of the device it’s being used on.

The developer then takes its Bitcoins to spend or invest.

It’s a scenario that borders on so ridiculous it’s hard to believe, but, competition in the free to play world is really driving developers to crazy lengths to figure out how to maximize their ARPU. Treating players like a botnet you can abuse also seems to be setting a dangerous precedent, and one that I hope doesn’t catch on.