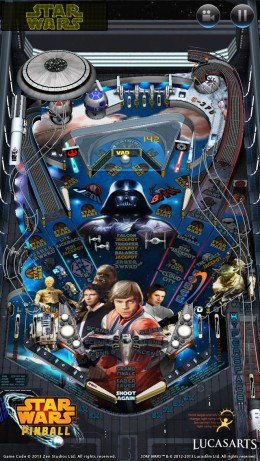 Enough with the Star Wars. We get it. They were fun movies. But do we really need another derivative, cynical capitalization on our memories of a… what’s that? It’s a pinball game from Zen Studios? Yes, please. And how much of my money would you like?"

That’s my basic reaction to Star Wars Pinball 2 ($1.99). Sure, we don’t need another Star Wars game. But when it’s from Zen Studios, who have made their reputation crafting fun, detailed, and innovative virtual pinball machines, it’s hard to resist the allure of diving into George Lucas’ overexposed space opera once again.

The app was released a while ago, but with the recent “Balance of the Force" update of three new tables, we felt it was overdue for a proper review.

As with Zen Pinball and Marvel Pinball, Star Wars Pinball includes one default table, with each additional table costing a bit of money. And like those games, every machine makes the mere idea of video pinball feel vital and new, without losing the touches that make real pinball so appealing.

Those familiar Skywalker Sound sound effects still satisfy nostalgia, while fitting in perfectly with the way pinball machines are supposed to look and feel. Lasers and light sabers fit the genre like a glove. The voices aren’t bad either, though they don’t always match exactly to the film.

But these tables aren’t for everyone. The difficulty remains high, and it might frustrate some. Every table is loaded with surprises, but getting to see them takes a high degree of patience and perseverance. Luckily, every table has a guide, making missions easier to identify and activate. And the payoff makes it very worth the effort.

The question with most Zen Studios games isn’t whether to buy (you should buy), but which additional machines are right for you. So here’s a breakdown of every machine in Star Wars Pinball 2, including the recently released Balance of the Force update.

Episode V: The Empire Strikes Back

This is the preloaded table, and it’s a solid one. It’s got the snowy look of Empire, and includes five scenes from the film. This is a great first table, covering a wide range of Star Warsiness. Darth Vader, Luke Skywalker, and light saber ramps all make delightful appearances.

Sure, this is a table based on the pre-Vader timeline, and some won’t be able to abide the prequels. But if they had to make a game using a recent Star Wars entity, I’m glad they chose the occasionally excellent “The Clone Wars” series. It’s a colorful, fun table, and the most accessible for kids, and reminded me of Marvel Pinball’s Spider-Man table. It’s a shockingly fun options, and one of my favorites of the bunch. Bonus: This table is generous with points, so if you’re obsessed with scoring, this is a great option.

I’m not the biggest fan of the tertiary character (Fun fact: He got started on the much maligned Star Wars Holiday Special!). But those who are will enjoy this table. As Fett, you take jobs from the Empire and Jabba. It’s got a grittier, earthier look, and even has a Sarlacc Pit. It’s definitely a solid table with plenty to do, but less essential than the others, unless you’re a true fan of the Fett.

Episode VI: Return of the Jedi

If you enjoyed the Empire Strikes Back table, but wish it had more forest and less snow, this one’s for you. Like the Episode V table, you go through five different scenes from the film. It’s another fun machine, though be ready to trade in tech for trees. In fact, you actually use a tree stump to launch your ball. It’s fun, but it might not be everyone’s thing.

Like Boba Fett, this is another focused take on a single character. The table goes through some Darth Vader’s greatest post-Anakin hits (and his the still-unintentionally-hilarious “NOOOOOOOOO!” from Revenge of the Sith). It’s a handsome, sleek table with tons of ramps, sound bytes, and glowing balls, and reminded me why I loved Vader so much to begin with. Double bonus: This table is even more generous with points than The Clone Wars table.

The wild card of the set, it’s also my favorite. This table lets you choose between rebel and imperial fighters. With space ships zipping around asteroids, this Starfighter Assault is the most exciting, interesting table. There’s minigames that might not be everyone’s thing, but I found them to be a nice break from the action, which is fast and furious.

It’s hard to go wrong with any of these tables. They’re all different, interesting and exciting, crafted to please hardcore pinball and Star Wars fan boys and girls alike. Even you nerf herders will dig it.