Like many gamers, when I got my first iOS device, I was looking for a ton of recommendations. I wanted to know the best rogue-like, the best RPG, the best platformer, and so on. Little by little, I found satisfactory answers to virtually all of my requests. But it was only this last week when I finally had what I expected to be a simple request properly fulfilled. You see, I love Picross. Whenever I stumble on a new Picross game, it takes me over until I’ve finished every last puzzle. Given the natural fit of a touch screen and the relatively small-scope nature of putting a puzzle game together, I was sure the App Store was going to be a wealth of riches for Picross clones. Boy, was I wrong. There are some that are decent enough, but controls, polish, and puzzle design have always been an issue. The closest thing we’ve had is the well-done 3D Picross clone Oh! Cube ($0.99). Today, however, we have Paint It Back (Free), and whether you are a fan of Picross or have no idea what it is, you’re definitely going to want to give it a look.

Just in case you’re in the group that has no idea what Picross is, I’ll give you a brief run-through. Generically known as nonograms but famously known to Western gamers through Nintendo’s series of games, Picross puzzles are grid-based logic puzzles that have you filling in squares to create a picture. Each row and column of the grid is marked with numbers indicating how many squares you should fill, but not which squares. You have to use these clues, along with the size of the grid, to deduce the correct squares to fill. Depending on the version you’re playing, you’ll either be immediately penalized for incorrectly filling a square, or in more sadistic cases, you’ll be allowed to see your mistake all the way through to the bitter end. 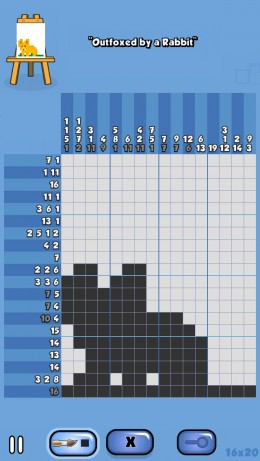 It seems like something that’s hard to get particularly wrong or right, but there are a lot of ways things can go awry. Should you go with a virtual control set up or full touch controls? The puzzles have to be designed carefully to make sure they can be solved without guessing. Smaller grids are easier to handle on a touch display but aren’t challenging enough to satisfy experienced players. Larger grids introduce new complications to the controls. Should you allow zooming out? How do you handle accidental touches that come from scrolling and zooming? How big should you go with the grids? How do you handle massive grids and still make it work on a phone screen?

Lots of ways to trip up, and so most have. Paint It Back elegantly solves almost all of these problems, and wraps the whole experience up in a wonderfully charming shell. A ghost comes into an art gallery and scares away all of the paintings, leaving blank canvasses. With an exhibition coming up soon, the paintings need to be repainted, and you’re the person for the job. Each puzzle has a title that gives a clue to the finished work, but sometimes the game will avert your expectations in an amusing way. The puzzles are divided into broadly-themed galleries, with each one generally providing more challenging puzzles than the last. There are 14 galleries in all, each containing 10 puzzles, and the first three galleries are free. After that, you can buy the rest of the galleries in $0.99 pieces or all at once for $2.99. 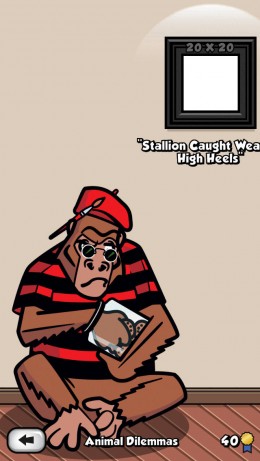 By default, the game uses touch controls, but you can switch to virtual controls if you prefer. Touching a square fills it, and a simple touch switch allows you to mark a space as empty. On larger puzzles, you can zoom out or in by pinching, and scroll around by flicking. On larger puzzles, you can touch and hold to fill in multiple squares at once. Accidentally filling in the wrong square has no consequences, as you aren’t timed or penalized for it. This might seem like it’s using kid gloves, but this method means you can make an incorrect deduction and carry it all the way through to the bitter end.

The puzzles get pretty large, which is great, and even better, the game lets you choose between difficulty modes for the larger puzzles. If you choose normal, the game will break the puzzles up into 10 x 10 mini-puzzles, and if you choose pro, the game will have you solve the puzzle in the largest pieces possible at once. Unfortunately, even on pro, the larger puzzles are broken up into chunks of 15 x 15 or the like, which takes some of the bite out of the end game. Completing a puzzle on normal earns you one medal, while completing it on pro nets you two. Medals are used to unlock later galleries, but there are plenty to go around, so you can slum it on normal difficulty for a while if you can’t get the hang of things.

The game really holds your hand carefully in the beginning, which is great if you’re new to nonograms. It’ll tell you how they work and give you a few mid-level tips to get you on your way. If you’re not new to nonograms, you’re going to be screaming for the game to stop solving the puzzles for you, but although it feels like a million years, it’s really only the first few puzzles. On the presentation side of things, while there’s not much you can do with a grid, the visuals outside the puzzles themselves are bright and charming. The music is pretty cool, relaxing without being obtrusive or repetitive. As some of the puzzles will take a long time to solve, having some decent music playing is a must.

Paint It Back looks great, has fun and clever puzzles, and just plain feels good to play. The only complaint I have is that I want more puzzles. What’s in here already is hours of fun, but like Galactus, I ever hunger for more, so I hope the developer provides. As a Picross fan, I’m absolutely delighted that there is finally an iOS game that can stand shoulder-to-shoulder with Nintendo’s take. This is hands-down the best take on nonograms to hit the App Store yet. If you’re a fan of these puzzles, I’m sure that’s all I need to say. If you’re not, this is the best time to become one.