As much as it might punish me for it, I have difficulty putting Duet ($2.99) down. As it did with both Bean’s Quest ($2.99) and Time Surfer ($0.99), Kumobius has tapped into a potent combination in its new game, this time exploring simple action, electronic music and death. Quite a bit of the latter.

There’s a bit of Super Hexagon ($2.99) in Duet’s bloodline. When you find yourself tapping the right and left sides of the screen to rotate semi-static figures amidst obstacles, there’s a certain familiarity. But this game isn’t playing with stale material. Its steps are powerful.

You control two circles, bound by a ring. The ring is illustrative—it won’t hit obstacles. The circles will, though, so you rotate them around each other to slip past wall after wall. Slip one down to the left and the other swings up to the right, and both must always bypass whatever stands in their way.

This results in a fluid dance, with one side leading. In a given level you might need to swing them past half a dozen static walls. Later it’s more than a dozen, and they’re moving as you go. Duet is rarely easy, and the evidence of your failure is left behind with splatters on the wall. 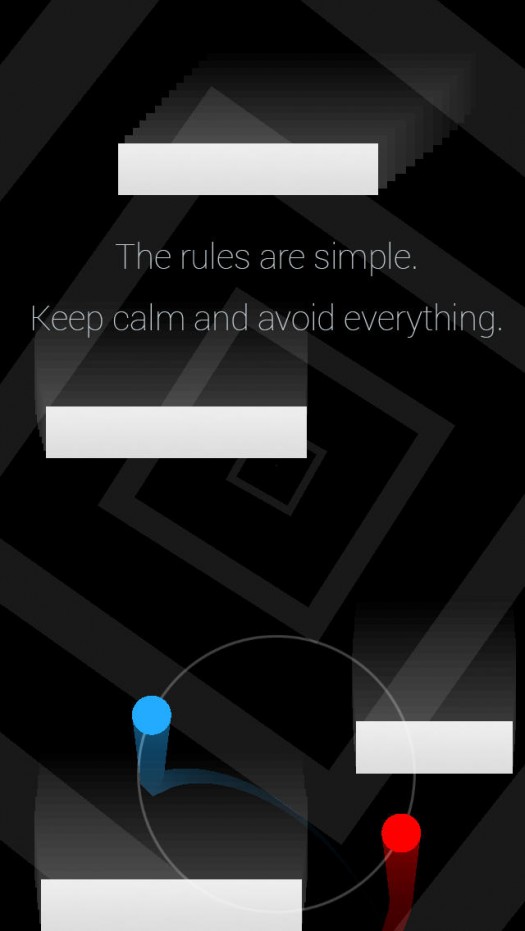 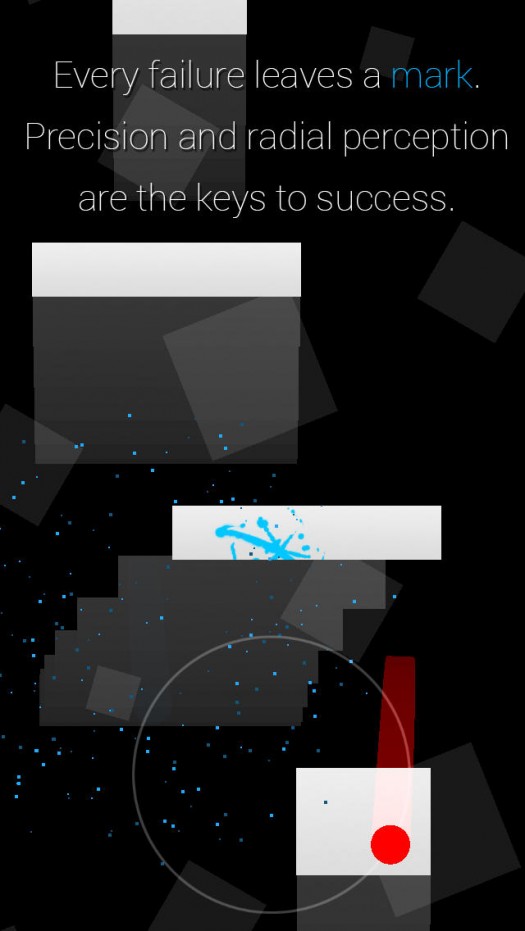 Each set of levels is given a title, one of the five Kübler-Ross stages of grief and a few things beyond. Meditations on the subjects lead into the action and carry the narrative. Thematically this risks being a touch overwrought, but Tim Shiel’s outstanding soundtrack effortlessly sells the mood . I’d be better at Duet if I could play without sound, but that would be too great a waste.

It’s not that the soundtrack outshines the game, but it does stand alone—quite beautifully. Shiel, who releases most of his electronic music under the name Faux Pas, has put together tracks that are both upbeat and eerie, with classical strains that draw attention to the dance on-screen.

And a dance it is, most of the time. With the barest hint of imagination, Duet becomes careful choreography viewed from the top down, partners carefully sweeping around the obstacles before them. In darker moments it’s a struggle, a madcap, violent embrace. In my hands, however, it spends as much time as a comedy of errors, each spin leading into a pratfall and a sudden end against the wall.

But Duet is designed for death—it’s made for failure. In the tradition of games like Super Hexagon, death is smoothed over. You slip back to the beginning of the level, the music barely skips a beat and you continue on to fail or succeed again. The only hint of failure is that growing collection of splatters on the wall, and when things are going poorly enough you can even appreciate their artistic merit.

Duet is split into nine chapters and an endless mode. Given its punishing nature, it seems as though endless ought to be a one shot, one kill sort of thing. Instead you have hit points, and they regenerate. Run into a wall and you’re sent back to the start of the segment, a chunk of your life gone. The trick is to get further next time, get far enough that you earn back more life than you lost. It’s an unusual trick, one that’s better suited to the game than a hard failure.

Duet is good—very good. It’s not flawless, but neither does it expect you to be. This isn’t an endless strive for a few more moments of perfection. The dance allows a few missteps, and doesn’t it feel incredible when you get it just right?