It’s kind of funny how the Rabbids, who were originally positioned as invading antagonists that Rayman needed to drive out of his home, have become something of an unwanted house guest who just won’t go home for fans of that franchise. Like it or not, the Rabbids were a big hit right out of the gate, proving more popular than the franchise they were born from. For Ubisoft, it’s a double-edged sword, because while people like the Rabbids themselves, finding the right kind of game to cast them as the protagonists has proven a bit tricky. Their chaotic nature made them a good fit for the mini-game collections they were born from, but efforts to fit them into a more focused type of game have so far yielded iffy results.

To be upfront, I like the Rabbids characters, or at least, I sometimes like them. Their goofy, violent, and most of all random brand of humor made what were otherwise pretty run-of-the-mill party games fun to play. I’ve laughed out loud more times playing the party games than I have with most other games that attempt humor. I think it’s because you never really knew what was coming a lot of the time. The Rabbids’ debut on iOS, Rabbids Go Phone ($0.99), was a strange sort of virtual pet that was probably the least risky way to bank on the charm of the characters, but not very interesting from a gaming point of view. Well, with Ubisoft’s latest release, Rabbids Big Bang ($0.99), the blockheaded bunnies finally have an iOS game to call their own, albeit a poorly fitting one. 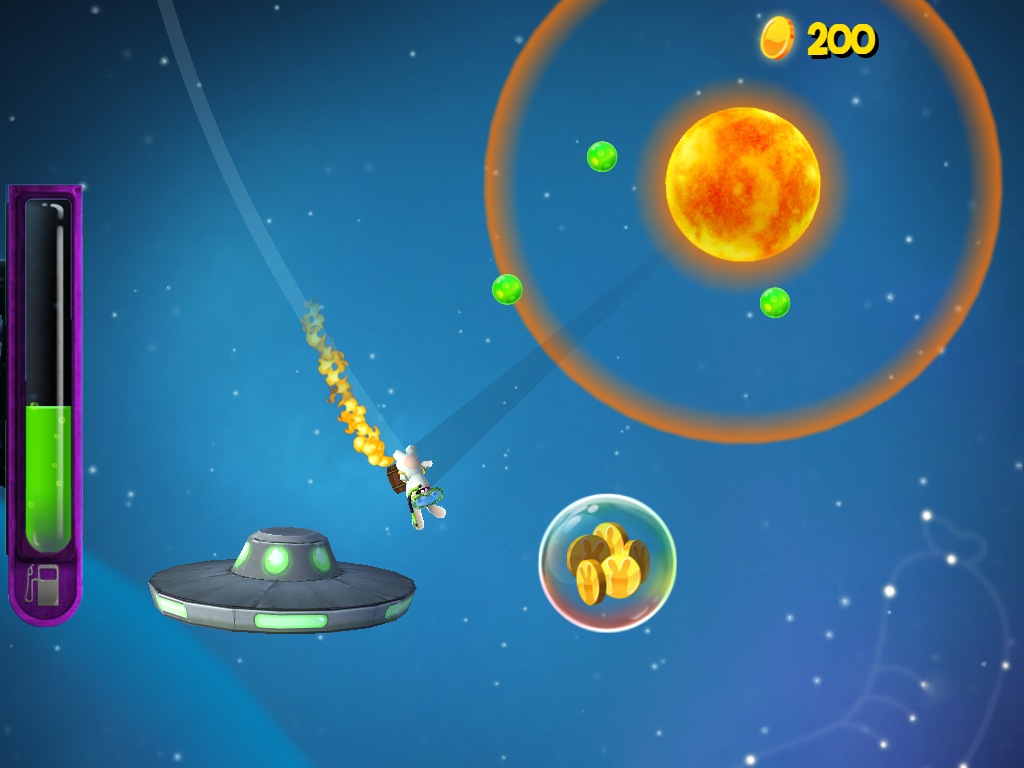 Rabbids Big Bang is a physics game, taking place in space as is the vogue nowadays. You launch your Rabbid in any direction with a variety of blunt instruments, propel him with a variety of, I don’t know, jetpack-y instruments, and perform tasks that vary from stage to stage. Each stage has a set time limit to accomplish its goal in, with how quickly you clear it determining your rank from one to three Rabbid emblems. Along the way you can pick up coins that can be spent on items in the shop. Unlocking the next set of stages requires a certain number of Rabbid emblems, so merely passing the stage with the lowest rank will not be enough to ensure your progress.

The goals vary, with some having you collect or hit a certain number of objects, some having you do laps around the planets, and others requiring you to fly a certain time or distance without touching the ground. The challenge level of the game turns up pretty quickly, and unlocking the later sets of stages requires a pretty good mastery of the gameplay mechanics. Your Rabbid will spin while in flight, so you have to time your use of the jetpack carefully to get where you want to go. The jetpack has limited fuel, so you can’t rely on it all the time. It’s also not the fastest way to get places most of the time. A lot of the strategy of the game comes from using the gravity of the various planets to quickly propel you where you need to go. If you’ve played Angry Birds Space (Free), you’ll probably take to the physics in this game pretty fast. 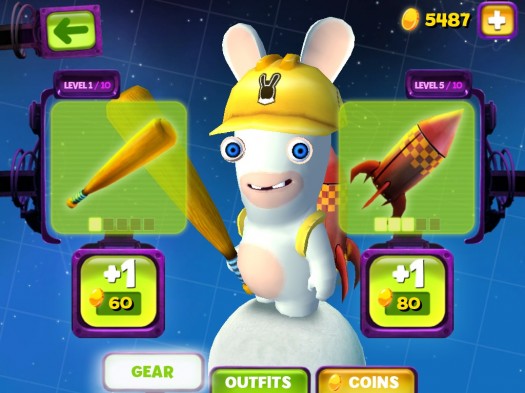 You’ll receive up to 70 coins for completing a stage, and they’re also scattered around the stages. You can upgrade your launching equipment and your jetpack, with cosmetic changes occurring every once in a while to help keep things fresh. The number of coins needed to upgrade past a certain point is a little bit crazy, but you don’t really need to upgrade your equipment to the maximum level. If you want to, however, you’re going to be looking at some grinding or spending real money on IAP coins. You can also spend your coins on costumes, mostly in the form of hats, if you’re looking for another way to burn them.

There are quite a number of stages, 150 in total, and the game promises that there are more to come. To be clear, though, there are actually just 10 different stage layouts, each with 15 different goals to complete. It’s not so bad, though, because as you play through the various goals, you’ll become more familiar with the layout, which helps you to go back and improve your times on previous goals. There’s certainly a lot of content here, but since the game doesn’t really introduce any interesting new mechanics as you go, it starts to feel a bit dull well before the end of the game. The jetpack, which uses a simple touch-to-thrust control setup, is very easy to learn, and once you do, there’s not much more to learn for the rest of the game. The goals, too, largely repeat with each set of levels, meaning you’re essentially doing the same thing at the end of the game that you were in the beginning.

This is where the personality of the Rabbids should come in to save the day, but unfortunately, they end up contributing to the problem rather than solving it. Like putting an improv comedian in a room with no props and no one to bounce off of, the Rabbids have little to work with here. It was funny to see a Rabbid hit another Rabbid with a blunt instrument the first time it happened, and har-har, he farts when his jetpack fuel is empty, everyone certainly says “bwaaaaaaah" a lot, and hey, when you finish a stage, the Rabbid that appears will brush his teeth with a toilet brush if you idle a bit. That’s really all there is to the humor in this game. Its other attempts at random comedy, like having cows or toilet paper rolls floating around in space, feel predictable and forced simultaneously. There’s not much wackiness here, and what little is there is repeated so frequently that it ceases to be wacky.

The game itself is okay, though I think there’s a dischord between the young audience it’s apparently aiming at and the relatively high difficulty of unlocking new level sets. The challenge here is strong enough for an adult, but I’m not sure an adult is going to be able to tolerate the monotony of both the humor and the gameplay for as long as the game is asking the player to. Predictable, lacking in humor, and probably a little too long, Rabbids Big Bang is at best an inoffensive appetizer while we wait for the sequel to Rayman Jungle Run ($2.99). At worst? BWAAAAAAAAAAAAAAAH!