D3 Publisher, the monster-geniuses behind Puzzle Quest, have always been more concerned with iteration and execution than novelty. They weren’t the first to pair match-three puzzling to turn-based combat, and they seem less concerned with being the best at it — a title that perhaps belongs to Puzzle & Dragons (Free) — than with laser-focusing on the human brain’s dopamine centers. One hexagonal detour through Puzzle Quest: Galactrix notwithstanding, D3 have made an entire business model out of building better mousetraps.

The bait in Marvel Puzzle Quest: Dark Reign (Free) is the promise of collecting a rogue’s gallery of Marvel characters to duke it out — turn by turn, jewel by jewel — over the course of a plot that shadows Dark Avengers storyline. Even for those unfamiliar with the ever-expanding Marvel universe, Dark Reign’s use of collection and randomized drops make it compulsively, sickeningly playable.

The essential structure hasn’t changed since the original Puzzle Quest. Combat is turn-based, and each color-coded match does damage to your opponent while generating action points (AP) required for special skills. When gems are matched, they disappear, only to be refilled from above. Players trade blows back and forth until someone dies (or is “downed,” in the kid-friendly parlance of Dark Reign). At the end of each fight, a reward will randomly drop: one of Dark Reign’s two currencies or a new character. If you don’t have that character yet, he or she will be added to your roster; if it’s a duplicate, it can be used as a level-up token. 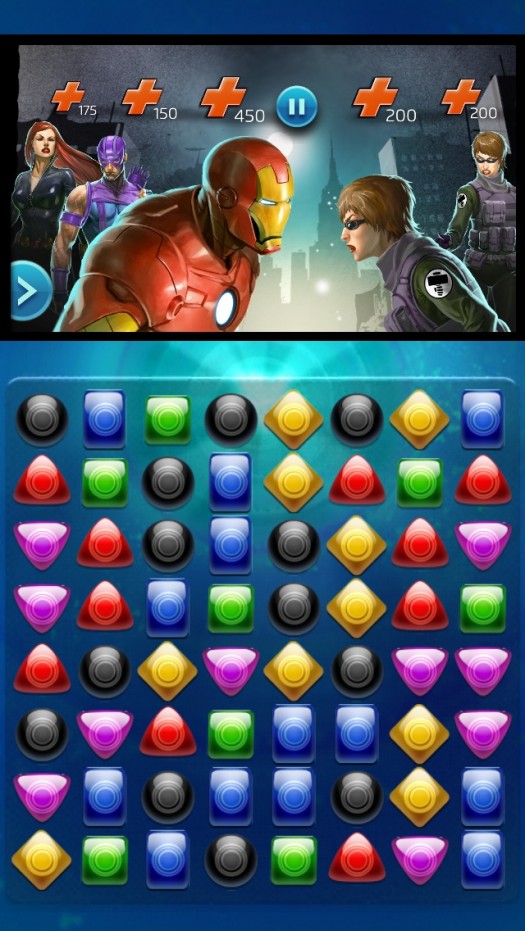 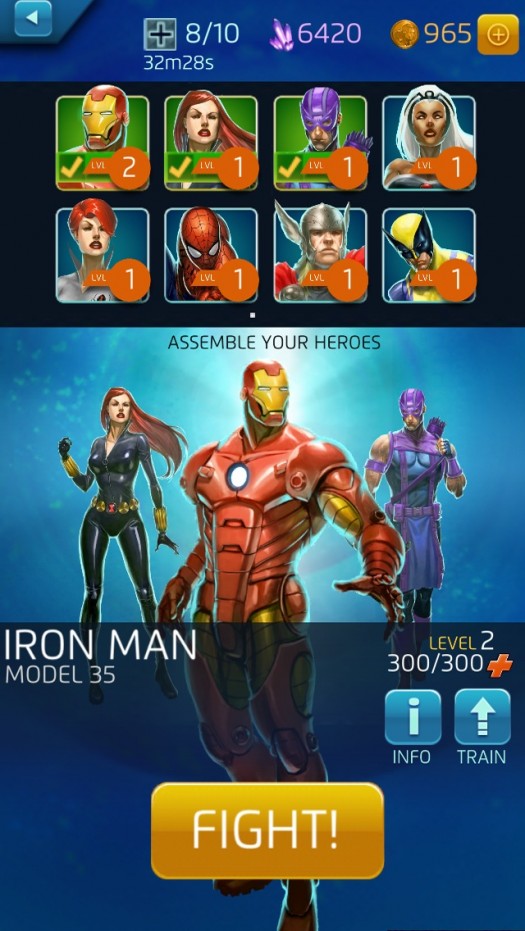 Previous Puzzle Quest games relied too heavily on long, unstoppable cascades of matching jewels filling in from the top, a phenomenon that felt less like luck and more like cheating. In Dark Reign that happens less often, the enemy AI is less prescient, and a few tweaks to the system make for a more calculated and strategic tête-à-tête. Most significantly: instead of a lone hero, Dark Reign’s fights are three-on-three.

This new focus on team fights opens the door for an increasingly complex meta-game of party construction and synergy. For example, attacking with a certain character makes them vulnerable, so managing AP-generation and health is a constant gamble. In general, you wouldn’t want multiple characters using the same color matches for special attacks, either.

As your roster expands, so do the possibilities for team composition and skill selection. Thor, for example, plays well with Iron Man and Modern Storm, while Magneto makes a better pairing with Black Widow. Whereas combat in previous Puzzle Quest games sometimes felt roughshod and chancy, Dark Reign is thoughtful, calculated, and purposeful.

Grinding for extra character drops is an unavoidable fact of playing Dark Reign, but it’s not at all tied to the in-app purchases. As is common in free iOS games, this economy uses two different currencies: Iso-8 is used to raise heroes’ stats, buy healing items, and add more space to your roster for new fighters; hero coins, obviously, allow you to buy random hero cards.

The game is mostly generous with both, but even buying new characters with hero coins is randomized — you could pump a bunch of real-world cash into Dark Reign, but that’s no guarantee that you’d get the character you want or the extra cards needed to level them up properly.

That said, the game’s difficulty spikes viciously between each act, and your first encounter with the Juggernaut will likely send you scurrying back to the prologue in search of leveling opportunities. Replaying old missions will randomly produce a new character, a bundle of Iso-8, or hero coins if you’re in a bind.

For what it’s worth, Dark Reign doesn’t seem any more grind-heavy than previous Puzzle Quest games, and the baseline combat is fun and flexible enough to support it. Dark Reign is repetitive, but it’s rarely brainless. If you don’t like Dark Reign, it’s because D3’s brand of random drops and incremental progress is a frighteningly effective psychological tenterhook, not because the in-app purchases are malicious or pervasive.

For anyone willing to buy into Puzzle Quest’s signature mechanics though, Dark Reign is — perhaps surprisingly — more robust than its fan service or freemium boondoggles would suggest, packing in enough content and new ideas to keep devotees matching jewels until the inevitable heat death of the Marvel universe.