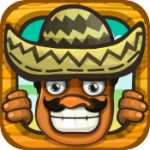 Sometimes you’ll pick up a puzzle game and burn yourself out rather quickly due to the overuse of tiring mechanics. Despite the fact that puzzle games often periodically introduce new concepts throughout their bite-sized levels, it’s all too common to become bored of going through the same motions over and over before getting to something new. Amigo Pancho (Free) goes through great lengths to keep you entertained throughout, even if the total package needs a bit more meat on its bones.

Amigo is a pretty straightforward game: at least, initially. All you have to do is guide Pancho — who is floating on two balloons — to the top of the screen. In short, it’s a combination of a standard puzzle game with switches and platforms and the digging mechanic from Where’s My Water? But Pancho doesn’t just float up instantly, as you need to tap him before he ascends into the heavenly skies above. This offers up a few complications of its own, as you need to decide when the coast is clear, or protect him as he ascends.

At first you’ll be going through the motions of figuring out basic digging puzzles, but then the game rapidly changes its pacing and gets a little more interesting. Concepts like dropping cardboard boxes on balloons, timed gates, wheels, and enemies pop up every other level. Some stages think a little more out of the box, forcing you to use multi-touch, decipher a code to unlock missiles, or work together with enemies. Amazingly, almost every level introduces a new concept — the only problem is you barely get enough time to enjoy them.

Before you know it, you’ll blaze through Pancho’s 60 levels spread across three locations (Texas, Siberia, and Tibet) and be left wanting more. Personally, I powered through it on a plane in a little over an hour and couldn’t put it down, so I hope the in-game promises of new locations arrive sooner than later. IAPs are in place, but they’re inoffensive and unnecessary. Purchases range from gold currency for purely cosmetic items, to early level unlocks, to power-ups that instantly completes a level (which you don’t need).

If you’re itching for a new puzzle game to speed through that’s entertaining throughout, Amigo Pancho is a safe bet. But if you crave something that’s more substantial than what’s currently on offer here, keep an eye on its update schedule, because this game has a lot of potential.