The year was 1994. It was a more innocent time. The 80s had been over for a few years (sadly), and music was about six years away from sucking. There was a man named Chris Sawyer. Years before he sucked away our lives with Rollercoaster Tycoon, he killed our social life with a business management sim, something that was new at the time.

Transport Tycoon ($6.99), by 31X Limited, is not just a port of the classic game, but has been built specifically for touch-screen. For those who played the original, you’ll feel pretty much right at home. For those new to this game, it might take some getting used to, as the game is loaded with menus that are deep, and numbers and icons that pop up everywhere. 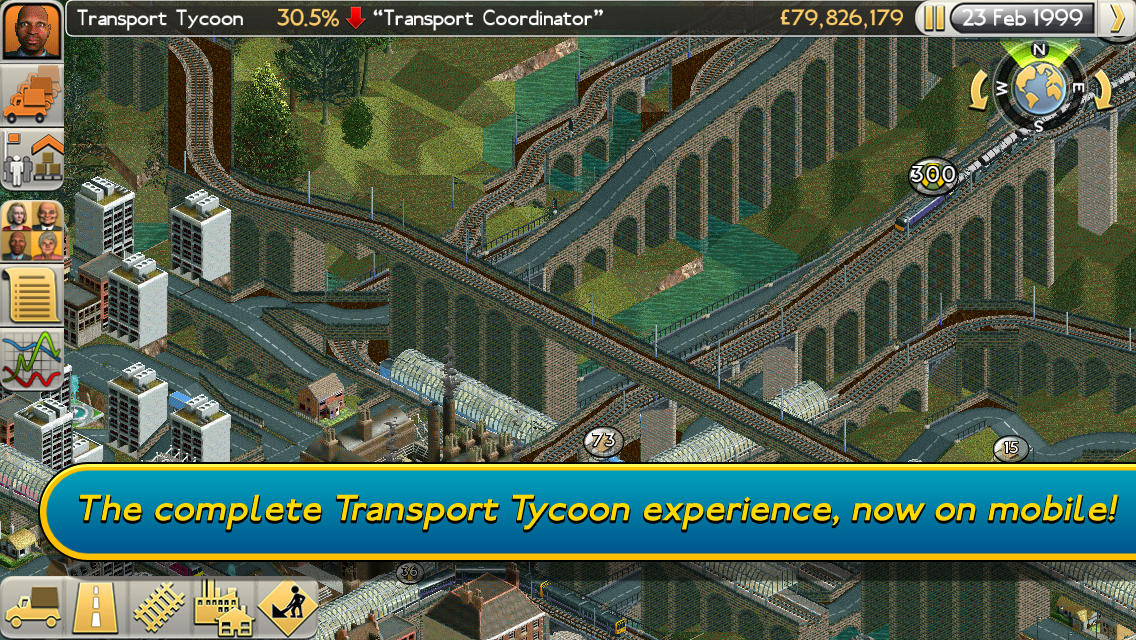 The most basic objective of the game is to get something from point A to point B, while achieving profitability and having a high success rank. To do this, you take on various scenarios (essentially levels). There are multiple scenarios available, ranked from beginner to expert. Under beginner, you’ll find the three tutorial scenarios, which teach you how to build a bus network, how to build a cargo transportation network, and how to build a train network. The tutorials do a decent job at introducing you to the main aspects of the game, but there are tons more mechanics, and much more information available, which you can find in the static Help page, which breaks down every aspect of the game.

You’re only in charge of transportation, if the title didn’t give that little bit away. Towns will grow around you automatically, constructing new houses, roads and industries. You have to supply transportation to these towns. Sure, a small town with a handful of houses may get by with a bus that travels between two stops, but you might want to construct a rail line to connect that small town to the metropolis down the way.

Constructing transit networks is the bread and butter here, and it’s a very in-depth process. Building a bus network requires you to place stations. You’ll be shown the area that the station covers. Overlaps will probably happen, but you want to avoid them to maximize productivity and profit. In a separate menu, you then purchase a bus. You’re shown how much that vehicle will cost you to purchase, its monthly cost, when it was built, its stats (power, weight, max speed, etc.), what it requires (bus requires roads, electric trains require a rail line with a third rail), and what purpose it serves (buses carry passengers, different trucks carry different types of cargo, trains can carry multiple carriages, etc.) Once the bus is placed on a road, you select where you want it to go, by clicking on each stop and telling it to stop there. With such micromanagement, you can have buses skip certain stops, and you can really get a smooth running operation going. The same applies to cargo networks and railroads. You’ll need a truck to pick up coal from the coal plant, and deliver it to the steel mill, which in turn produces steel, which another truck can use to deliver to a location that requires it, all in the name of profit.

As I mentioned, there is a heavy dose of micromanagement here, and that may not be fun for everybody. If you’re someone who enjoys controlling every single aspect of every single option, sifting through menus and crunching numbers to shave two seconds off that precious rail link, you’ll be as happy as can be.

As you progress through the game and attempt different scenarios, you’ll also have access to trams, boats/ferries and planes, which had yet another layer of design and management to your network.

Scenarios are fun and varied, and will task you will different objectives. The beginner scenarios want you to deliver a total of 500 passengers, reach a certain performance index, or attain a set monthly profit. As you progress past the easier scenarios, you’ll have timers thrown at you, such as amassing a monthly profit of $10,000 within ten years, or deliver 50,000 passengers within a quarter decade. 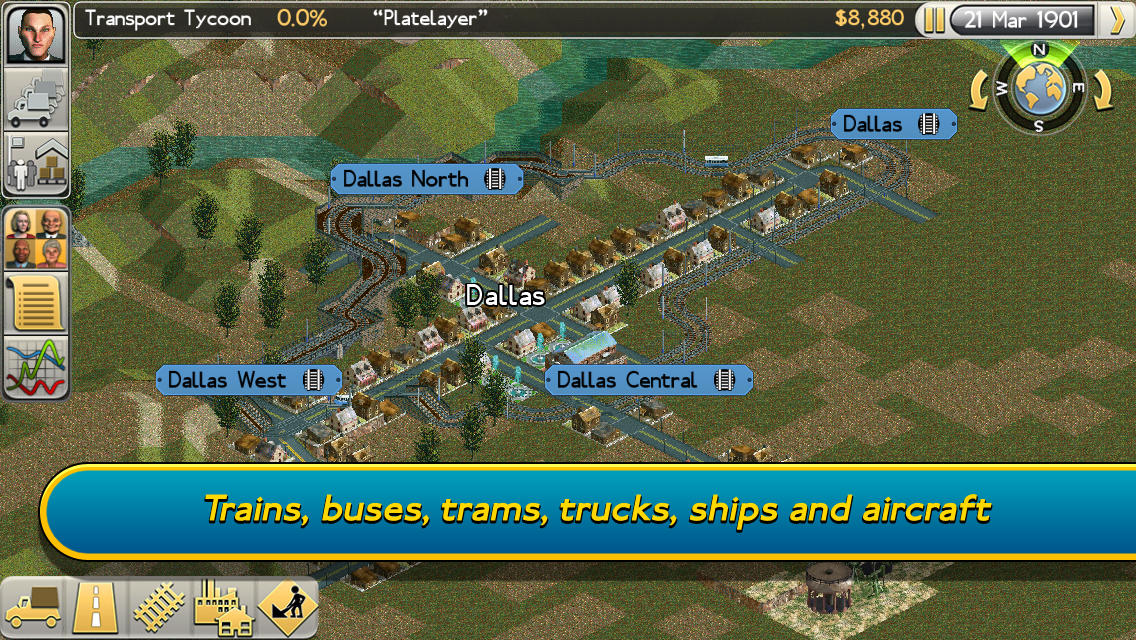 You’ll also have to contend with competing companies in the later scenarios, who may beat you to the punch and take up that one chunk of land that would’ve meant the difference to the success of your company. You might be competing with one company, or you might have fourteen all vying for the same goal as you. I found the A.I. companies to be pretty ruthless, even in the earlier scenarios. And finally, regarding scenarios, every single one is available from the start; there is no unlocking required, so if you feel like you need a challenge you haven’t had in almost twenty years, head on over to the expert tab and enjoy.

Sadly, there is no sandbox mode, where you can just build to your heart’s content. Perhaps in a future update!

The interface works very well for a touch screen, and despite some menus extending very deeply, everything is easily accessible at your fingertips. Checking your finances, seeing your routes, purchasing new vehicles and laying new roadwork is simple. Even though you’re not able to directly alter the towns, you can terraform to your heart’s content; raise or lower full squares of land, alter just the corners, do what you want. Just remember, every single action requires cash, which, depending on your efficiency, may be in short supply! Controlling the game is simple as well. Pinch to zoom and two-finger twist to rotate the screen and voila, simplicity.

Graphically, Transport Tycoon looks very similar to its predecessor, and that’s not a bad thing at all. The graphics are pixilated and blocky, and that lends itself well to the nostalgic factor that the game has. Music has a feel of a MIDI track (remember those?), and sound effects are equally good. However, there doesn’t seem to be much variety, and the sound gets repetitive very quickly. 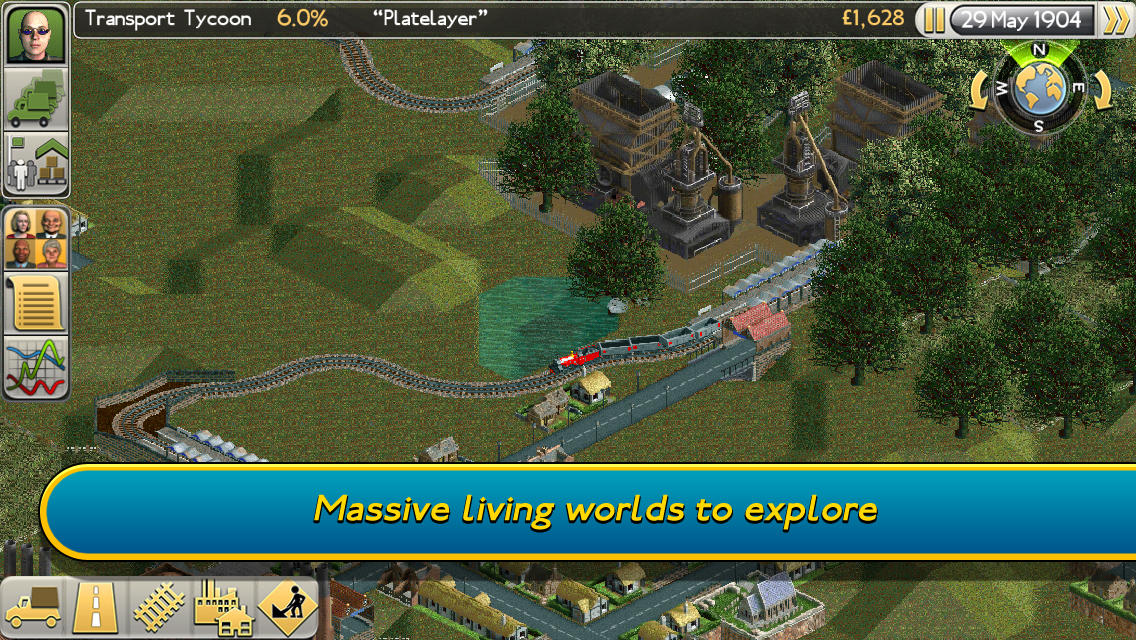 There are a bunch of GameCenter achievements available, and Transport Tycoon allows you to save to iCloud (disabled by default). You can also enable posting your achievements to Facebook or Twitter. I found that after having the Twitter dialog pop up, the game would freeze after. Music would play and animations would go, but I was unable to interact with the game. I had to force close and reopen it to resume playing.

The best part about a premium priced iOS game? There is no IAP to be had. At all.

Overall, Transport Tycoon for iOS is an excellent and faithful port, with nothing really going against it aside from a couple of small issues, both of which will probably be corrected, and is well worth its price tag. You will find countless hours of micromanaging fun in this title. If you’re a numbers and stats person, even more so.

Now all we need is a great port of Rollercoaster Tycoon, and social lives will all but cease to exist.