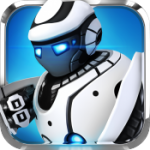 With its auto-forward movement, behind the character viewpoint, and the word ‘run’ in the title, you’d be forgiven for thinking Orborun ($1.99) is just another endless runner. Oh, it’s a runner, or rather a roller, but instead of just throwing various random obstacles at you ad infinitum, this is a stage-based affair with a lot of puzzle elements and devilish obstacles. The result is quite a fun game, but fair warning: it’s a pretty stiff challenge.

In Orborun, you control a little robot called an Orbot. I presume it has little to no relation to the 1980s cartoon, but maybe there’s a shocking twist yet to be revealed. At any rate, for reasons that are not explained to us, Orbot must roll through levels to reach the goal at the end, picking up keys and currency along the way. Orbot himself can basically perform three actions. He can roll left, he can roll right, and by charging up for a short time, he can slow himself down. Everything else is level design and physics.

Using your choice of either tilt or touch controls, you have to guide Orbot along his path, collecting items to boost your score in pursuit of a three-star ranking for the level. I found the touch controls to be more to my liking than the tilt, but I’ve never been very good with tilt-based games, so you’ll probably want to give both a try and see what works out for you. Beating a level will unlock the next one, regardless of the number of stars you earn, but by collecting enough stars, you’ll unlock extra levels and earn the game’s secondary currency, so there’s definitely clear incentive to master each level. 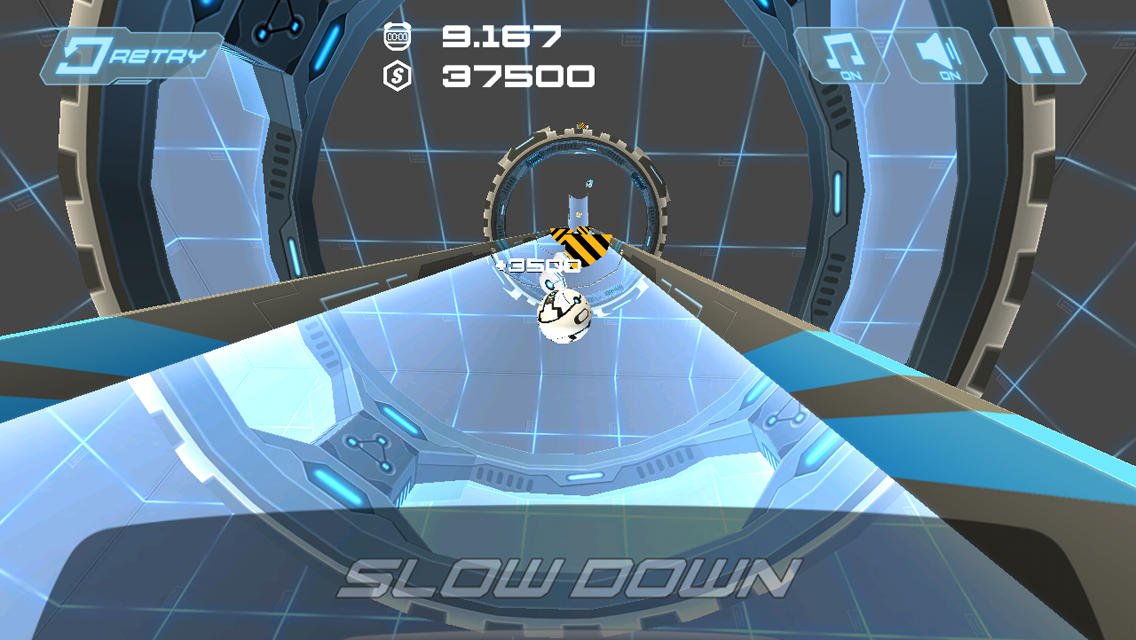 Oh, and don’t worry about IAP. While there are two currencies in the game, there is no IAP. The main currency buys you new skins for your bot, which are cosmetic only, while the secondary currency buys you new Orbots with different parameters. I’d like to have seen a bit more stuff to buy, but the stuff that’s here already is either cute or has a meaningful effect on gameplay, so I suppose it’s fine. There are about 100 levels at the moment, grouped into three episodes. Though levels rarely take longer than a minute to finish on a perfect run, it’s still quite a lot of content, because it takes quite a bit of practice to nail down most of the levels.

The game will initially lull you into a false sense of security. The tutorial levels and the first several levels of the main game are quite straight-forward and simple. Oh, you could fall off the stage, if you have a desire to, but it’s almost trivial to get three stars and reach the goal without incident. About a third of the way through the first episode, however, the gloves come off. Even then, it’s just tenderizing you a bit for the main event. You’re going to be very well-acquainted with the retry button, I can assure you. The game very quickly starts throwing out walls that shatter you on impact, teleporters that sometimes lead you in circles, moving platforms where one false step flings you into the abyss, mid-air boosters, jump pads, and more. It becomes a struggle to even reach the end, let alone get the stars. Veterans of the Great Battletoads War should be careful about flashbacks while playing Orborun. 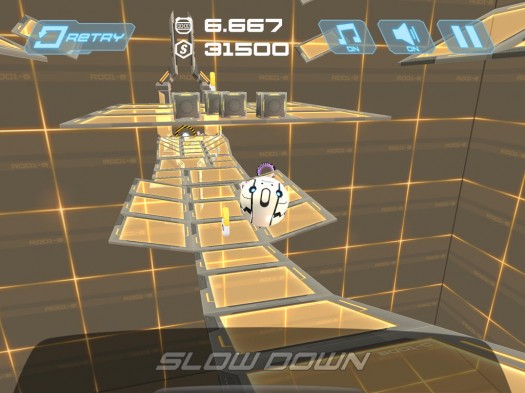 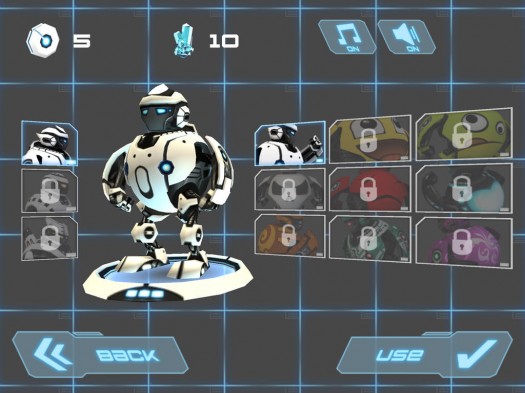 Many of the stages also have multiple paths leading to the goal, though generally only one will have enough items placed along it to earn the three-star ranking. I was constantly surprised at the new tricks the game pulled out as I played through the levels. You’ll sometimes find yourself dying on your first run because you stopped to think, “Are they serious?" The answer always turns out to be yes. It’s not the smoothest ramp up in terms of difficulty, but since you simply need to reach the goal to move on to another stage, I never got stuck for terribly long on any one level, though I did rack up double-digit death counts on a fairly regular basis. If you do happen to get stuck, you have the option of spending your valuable second currency to unlock the next level without clearing the one you’re currently on. As that currency is quite valuable, it’s not something I would recommend, but it is an option.

Running on the Unity engine, Orborun is a nice, clean-looking game. Everything has a sterilized feel that brings to mind a laboratory or a test range, which is perhaps the intended setting of the story. As is important in a difficult, high-speed game like this, everything runs very smoothly even on lower spec hardware like the iPhone 4. It could stand to be a bit more visually interesting, but too many distractions might make an already difficult game a bit too difficult. I could take or leave the music. It’s pretty generic techno-style music, and while it’s not annoying, it’s not very memorable, either. I rather enjoyed the sound effect for when you break your Orbot. It sounds like glass shattering, as though the poor little guy is made out of a fishbowl.

The UI is pretty good, and thankfully, the retry button is placed very conveniently and offers quick results. In games like this where you’re probably going to fail a lot, a quick retry is a must. The one failing of the UI is that the game asks you your preferred control method before every run, including retries. It’s very irritating, like anything that gets between the player and their next try on difficult games. My understanding is that the developer may fix this in an update, but for now, it’s quite annoying.

Orborun is a very fun game, but only if you can tolerate a pretty decent challenge. People in our forums have been calling this the Super Meat Boy of rolling games, and I don’t think I could put it any better than that. You’re going to get angry, you’re going to wail in the agony of defeat, you’re going to bask in your victories, and you are going to hammer that retry button until there’s a hole in your screen. It’s hard to find anything bad to say about the game apart from the control option showing up so often and slightly uninspired visual/audio design. If that all sounds great to you, give Orborun a little of your attention, it’s dying to meet you.