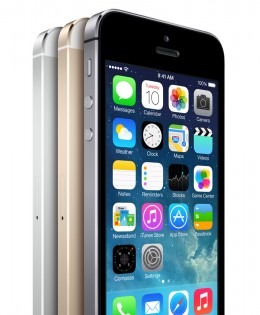 Today is the day that the new iPhones hit retail shelves, and with Apple opting to not let people pre-order the iPhone 5s this time around, it meant that I’d be playing the “wait in line game" at my local Apple store. I’ve done the whole waiting in line overnight thing for Apple devices before, and while it can be kind of fun, it’s certainly lost a lot of its luster the past couple of times I’ve done it.

With both the iPhone 5 and the iPad mini, and if memory serves me the iPhone 4s as well, I’ve enjoyed pre-ordering online and having a delivery person drop the new device right on the doorstep of my warm, comfortable, bathroom-and-refrigerator-having apartment. Sure, I’m getting the device a bit later in the day than if I would have waited in line at a store, but that’s a small price to pay for a decent night’s sleep and the comforts of home.

But, that wasn’t an option this time, so out in the cold and still night I went. My local Apple Store is in Santa Rosa, CA and I arrived at just after 5am to see some people already camped out, but not too many. I was the 23rd person in line. Apple was gearing up to open early at 8am, and since this Apple Store is in a mall we were all waiting on a sidewalk along the mall building. At around 7am the mall opened up for us, where we were led to another (much warmer) line just outside the store. All in all two hours out in the cold wasn’t so bad, and it sounds like I had a much more pleasant time than Eli did.

The store opened up at 8am on the dot and actually buying my iPhone 5s was a quick process. I was gunning for the black–err, space grey model to begin with, and there were ample supplies of those for every carrier and in every storage size. As you’ve likely heard on the Internet all day, those looking for the gold or silver models were largely out of luck. I was 23rd in line and every version of both gold and silver was gone by the time they got to me to ask which model I wanted.

While buying the phone itself was easy, activating it was not. For whatever reason, the iPhone 5s would not play nice with the SIM card from my iPhone 5. Maybe Verizon’s servers were just getting hammered today, maybe the SIM itself is bunk, but after more than an hour of several Apple employees and a Verizon rep trying everything they could to get it to activate, I said “nuts to this!" and took off with my new phone unactivated. Essentially, I bought a very expensive iPod touch with a fingerprint sensor. Hopefully I can get that sorted out in the next day or two.

As for the iPhone 5s hardware itself, well, it’s hardly much different from that of the iPhone 5. The size, weight, and “feel" are all roughly the same, and since I adore how the iPhone 5 feels that’s not a bad thing at all. As mentioned, the new black is actually space grey, and indeed the anodized part of the aluminum and the outside edge of the phone are much more grey than the iPhone 5’s “slate" color. To be honest, I kind of prefer the darker slate color of the iPhone 5, but the space grey does look very nice, and gives me a heavy “OG iPhone" vibe which I like. The outer ring, though, I definitely prefer with the more silvery grey of the iPhone 5s, and it looks damn classy looking at the phone’s face straight on. This, like all Apple products, is an elegant piece of kit.

The other major change in the iPhone 5s aside from its color is the new home button and its much ballyhooed Touch ID fingerprint sensor. I was bummed to see that the home button is no longer emblazoned with the iconic rounded square that’s graced every iPhone to date, but the button itself is much more sturdy and “clicky" than previous versions. That was one element of the iPhone that always felt sort of cheap to me, but not here.

So overall my iPhone-getting experience was pretty good, and while the hardware doesn’t feel all that different than the iPhone 5, the iPhone 5s is a beautiful device that I can’t wait to spend hours upon hours gaming on. Speaking of which, my new iPhone is still syncing, so I’ll be back soon with some impressions on what playing games on the new device is like.