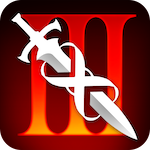 Looking back, the notion that we would one day have the Unreal Engine on the iPhone seemed, well, unreal. Epic teased us with the Epic Citadel (Free) tech demo, and left the whole internet wondering what playing a game inside of the beautiful little universes that now were now able to be rendered on the device in our pocket would be like. Infinity Blade ($5.99) was the answer we were all hoping for and Chair not only managed to release a game that outclassed everything else on the App Store in the graphical department, but they also came up with their often imitated but never duplicated swipe-based combat system.

The original Infinity Blade was highly cyclical, almost to a fault. Gameplay involved little more than fighting an array of dudes, inevitably being slain by the God King, and starting over until you were strong enough to win the final encounter. The premise was silly, and, at least to me, seemed like a weird framework to add longevity to what would’ve been a super short game. I mean, can you imagine if you got to the God King for the first time, killed him, and the credits rolled? 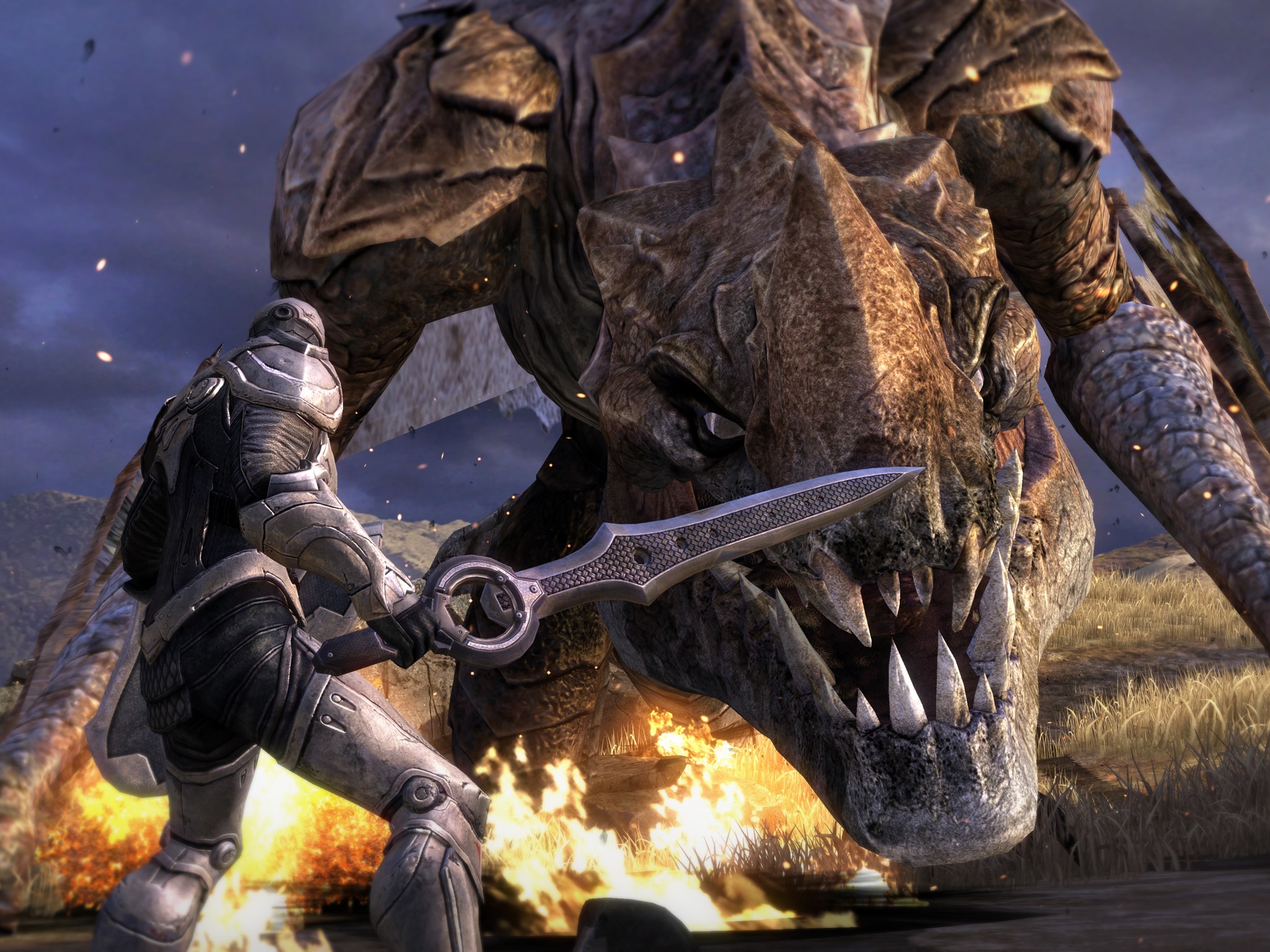 Infinity Blade II ($6.99) came out a year later and fleshed out this story further, applying canonical band aids to squeeze a sensible sequel and reasonable plot line to follow the first game with. Swipe-based combat mechanics largely stayed the same, with a few additions to add a shocking amount of depth, customization, and complexity to the game.

While Infinity Blade II was a refinement of the original, Infinity Blade III takes the familiar Infinity Blade formula and tweaks it to the point of perfection. There’s far more content, even more customization, additional systems to delve in to, and best of all, huge dragons.

The core of the game remains the same in that you play through a chain of swipe-based combat encounters with massive enemies before reaching the final boss. Die to that boss, and you start over from the beginning of that particular area. The cyclical nature of the game plays well with how the experience system works, which has the player constantly upgrading items, filling their subsequent experience bars to the point of mastery, leveling up, and generally getting stronger. 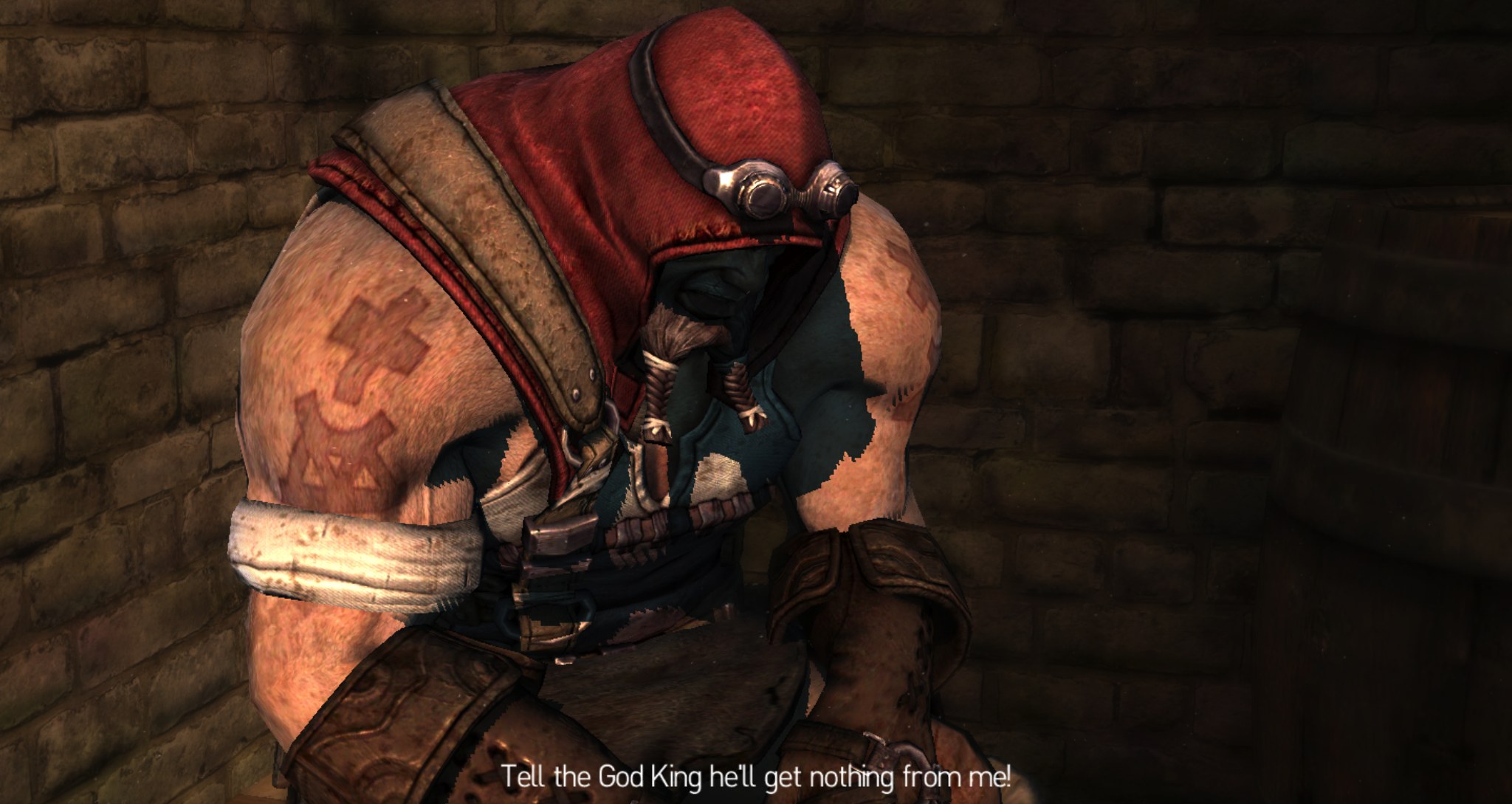 Gear can be purchased for gold via the ever-present in-game shop, looted from chests, or dropped from vanquished enemies- Just like you’ve grown used to in previous Infinity Blade iterations. A new merchant system has been added to the game via a woman who randomly appears at your hideout who will sell you random rare loot for discount prices. She’ll often have seriously awesome items, but more often than not seems like a tease of what you could have, if only you had the gold to buy it.

The hideout I mentioned is basically the hub for all of your adventures inside of Infinity Blade III. It’s where you’ll find the merchant, brew potions, and eventually combine gems and forge new weapons once you’re found the subsequent NPC’s in game to do so. Fiddling with potions, gems, and weapon upgrades all invoke a timer system, which raised some concerns in our community once people saw those stereotypical dreaded timer bars in their beloved Infinity Blade.

The thing is, you never feel like you need any of these things right now. Instead, it seems like the routine you fall in to is to start a potion or a gem, and then go off and fight through an area. Typically, things will be done by the time you make it back to your hideout. The single exception to this seems to be if you’re combining some particularly powerful reagents to make a really awesome item. The longest I’ve seen so far is a 24 hour potion timer, but that was the result of me throwing all of my best ingredients into the kettle. Low-level potions brew in a matter of minutes, and the other NPC services at your hideout largely work the same way. 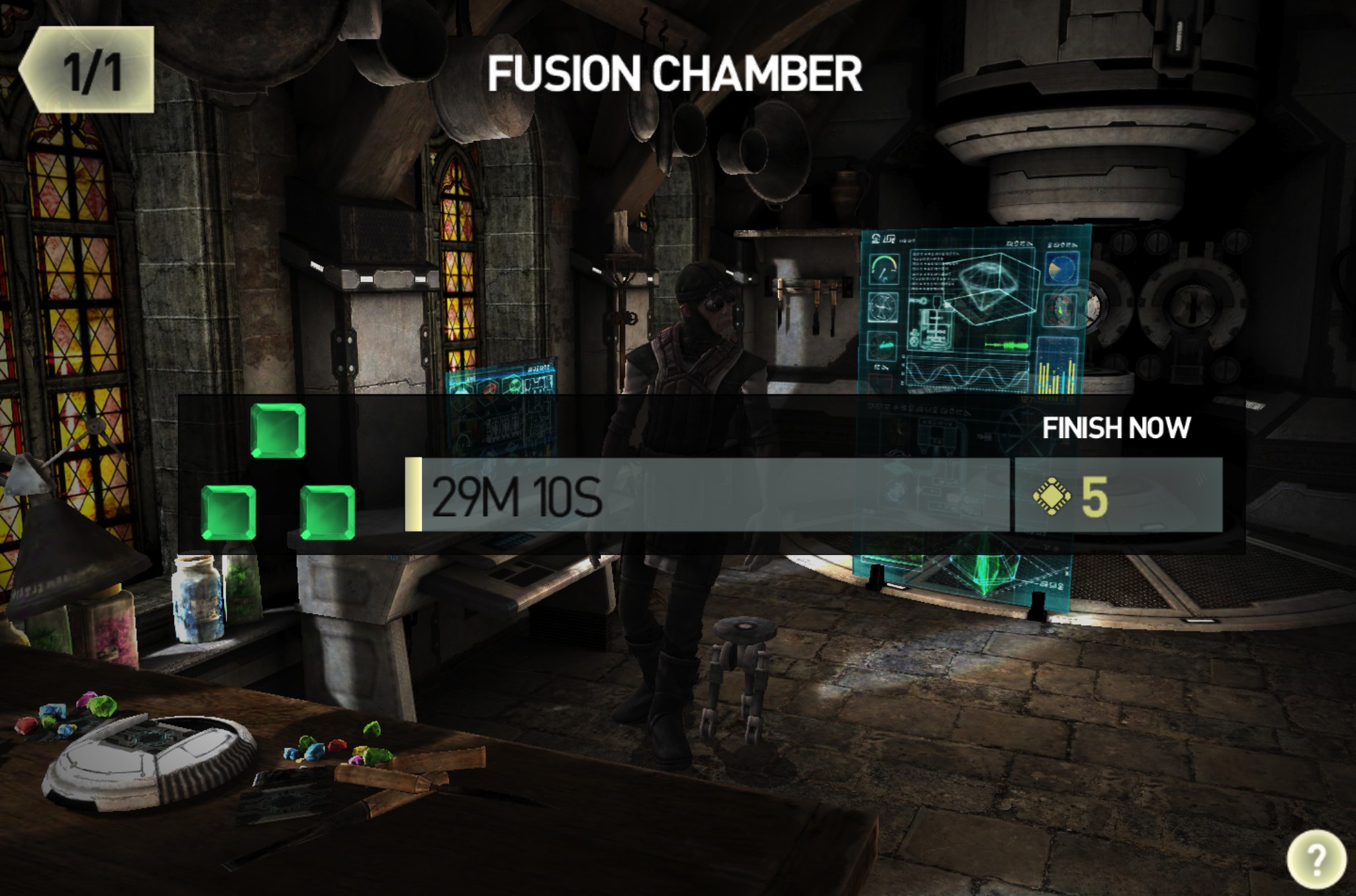 Infinity Blade III has a weird “premium" (using some very large air quotes there) dual currency system that might send up some red flags initially, but the game seems to just barf the “premium" secondary currency at you at every turn. Completing secondary objectives will get you loads of it, and most of the time you’re earning these special coins left and right without even particularly trying to. Aside from speeding up potion brewing, gem combining, and blacksmithing this funny money is also used to buy keys, prize wheels, and other things that you don’t really need unless you insist on opening every chest you come across. Keys drop by themselves, but, not with enough regularity to open everything.

Of course you can also buy kinds of currency via IAP, but, I’m not sure why you would as it seems like the best way to just break the game and take all the fun out of it would be by just instantly gearing your dude up with the best items in the game. Additionally, because of how the experience system works, you’d buy the best stuff, fill it with experience, then not be able to level up anymore without downgrading your load out. In other words, this is just one more thing that’s similar to previous Infinity Blade games.

The hideout is also home to the game’s world map, which gives players way more flexibility in where to go in game. You’ll often have the ability to visit multiple locales, ranging from areas to advance the story, gather loot, or earn gold through completing challenges like seeing how many combos you can string together. This variety goes a long way, particularly when you’re stuck on a boss and just want to do something else to level up before revisiting that level to try again. 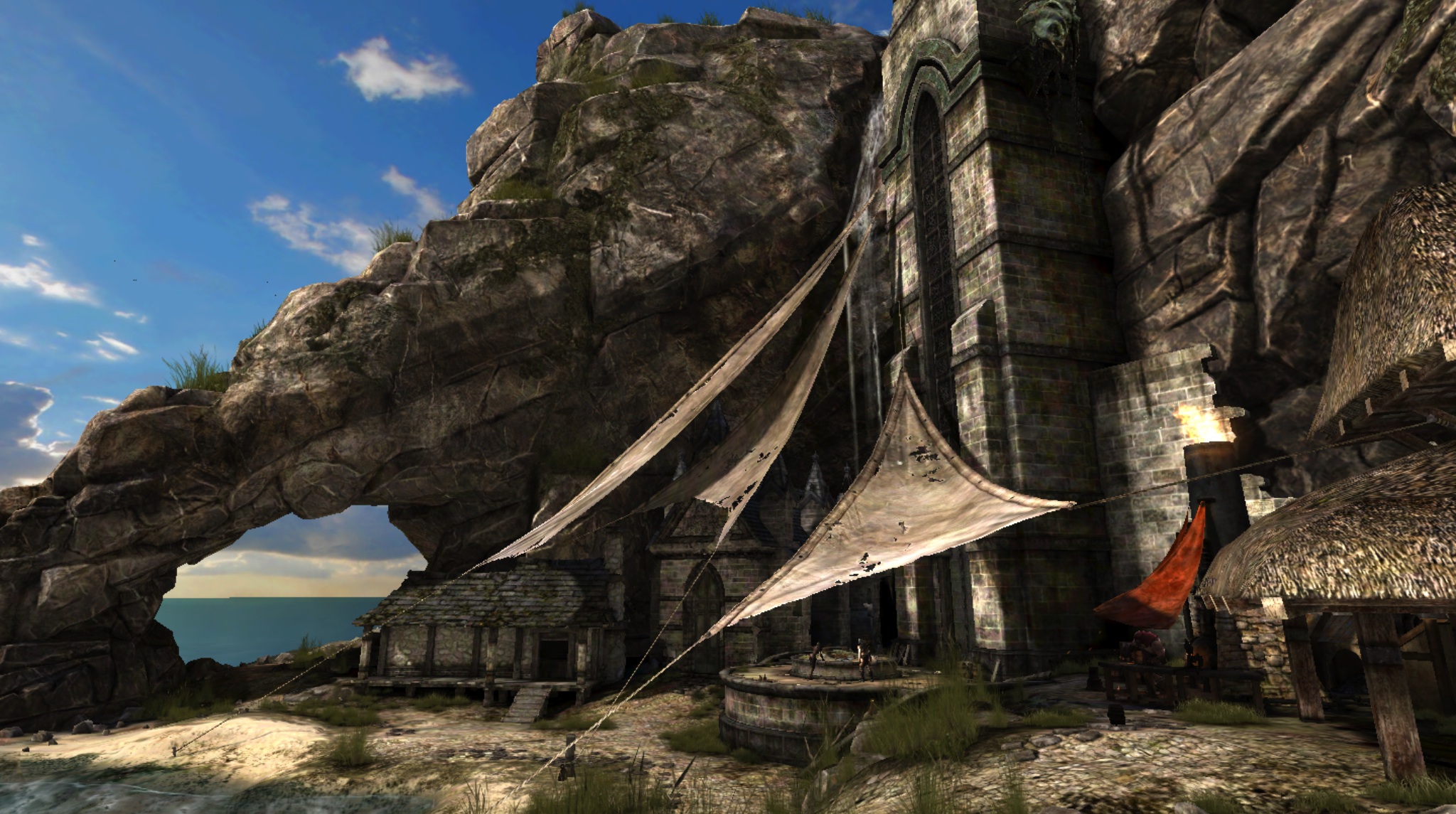 When you go out adventuring, you’ll be able to play as one of two characters. Some levels give you a choice, while others that have to do with plot development are typically only playable by one. Siris plays like the Infinity Blade fighter you’re used to, with heavy armor, big shields, huge weapons, and more. Isa has totally different combat styles, which makes alternating between characters feel like a totally fresh experience. The best way to describe their differences would be to think of Siris as your typical RPG trope warrior, while Isa falls in line with a thief or rogue class.

Each character is geared and leveled up independently, and tricking out both of your guys serves as one more carrot on a stick for the whole game. Additionally, they have unique abilities that you can level up, my favorite of which is Isa’s utility when it comes to looting, as she can eventually lock pick both small and medium chests without requiring a key as it really bugs me to pass up chests I can’t open due to lack of keys.

It shouldn’t come as much of a surprise by now, but the graphics in Infinity Blade III on my iPad 4 are absolutely out of this world. For review purposes, I’ve been playing an early copy of the game on two super long flights to and from GDC China and it was almost obnoxious having an aisle seat and having people stop to watch me play. Paired with the Retina Display, Infinity Blade III looks too good to be true, and it’s mind blowing to think that it’s going to look even better on the iPhone 5s thanks to its OpenGL ES 3.0 capabilities. 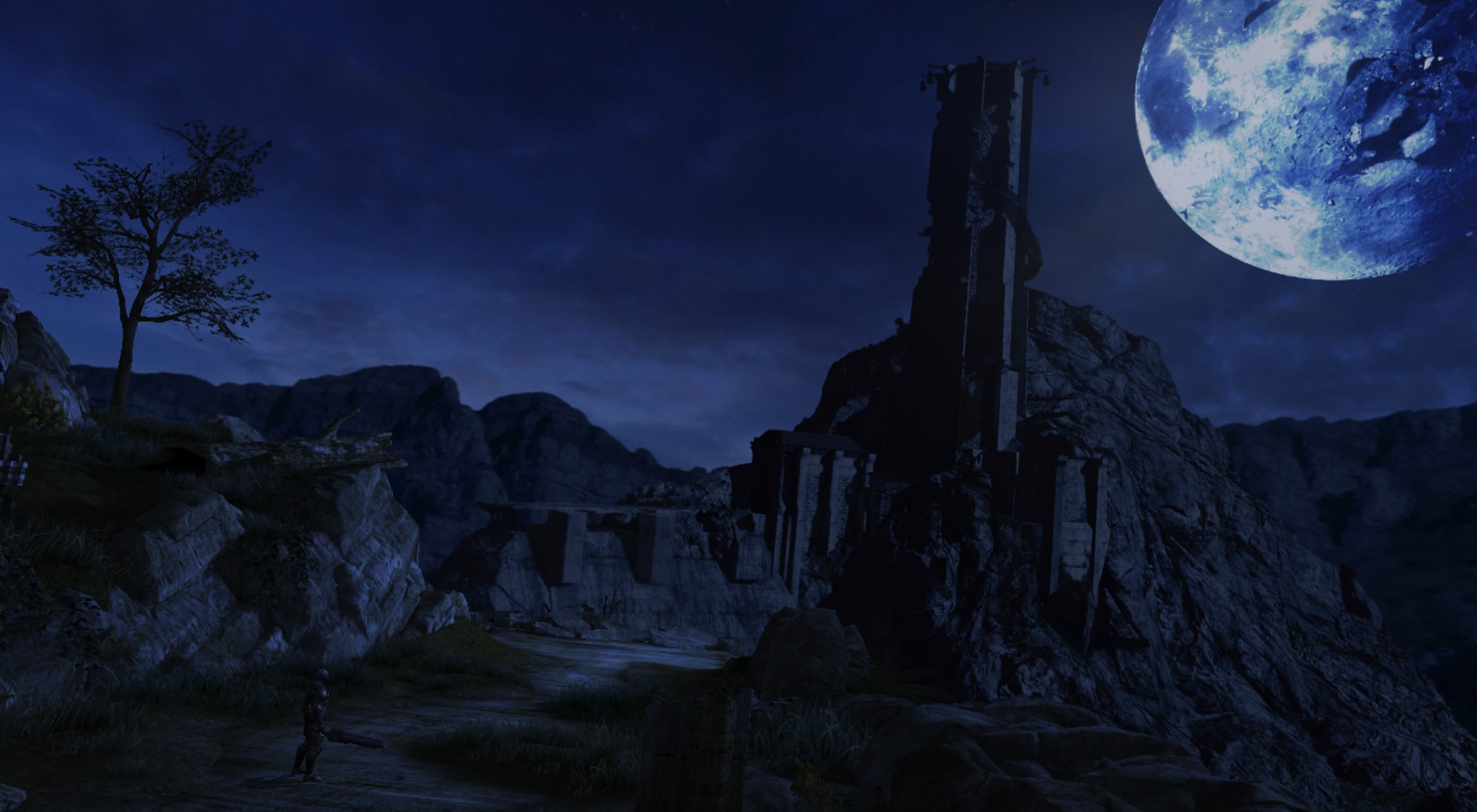 Like previous games, the controls of Infinity Blade III are flawless. You feel like you have an ultra-direct connection to the action, and through various gestures for special combos for each type of weapon, all of them manage to feel distinctly different while playing. My personal favorite is Isa’s dual wielding, as combos for her involve tapping in a ton of different hot areas that pop up to unleash a flurry of piercing attacks.

One really has to reach to even come up with anything bad to say about Infinity Blade III. You could argue that it’s not enough of a departure from the previous games, but when we’re looking at the conclusion of a trilogy I think it’s totally appropriate to take what the last two games were about and tighten that up in any small way you can. You also still don’t have any kind of free roaming ability, if there’s anyone out there who is still worked up about that.

The one drawback, if you’d even call this that, is that you’ll find yourself so interested in the plot development of Infinity Blade III that dying to a boss and needing to start that area over instead of seeing what happens next is actually a total bummer at times. It’s a weird sensation, as we sort of just accept that this is the sort of thing you do in Infinity Blade games, and actually feeling disappointed that I need to wait to see what happens next is an odd feeling for a game series that traditionally has been (for me, anyway) so combat-focused.

Infinity Blade titles are the gold standard for iOS gaming, so, whatever you do, don’t miss this one. Keep an eye on TouchArcade, as we’ll post the second the game is available for download.