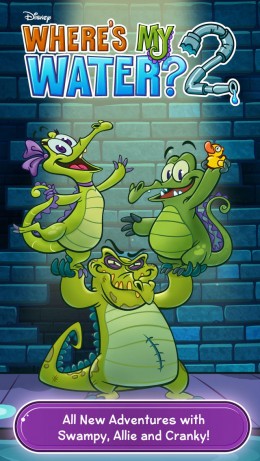 Disney’s Where’s My Water? franchise is an interesting beast, as they somehow managed to turn what normally would just be a throwaway character added for a bit of flavor in an iOS game into an… Actual character in the Disney roster. That’s an incredible feat. Starting with Where’s My Water? ($1.99) and then moving on to Where’s My Perry? ($2.99), Where’s My Mickey ($1.99) along with a few other entries, the whole Where’s My series has been stupidly popular.

Well, Where’s My Water? 2 (Free) is an actual, proper, Swampy-centric sequel to the original. There’s over 100 new levels, a challenge mode, Duck Rush mode, and a new free to play pricing structure which hopefully won’t be too oppressive. Either way, we positively reviewed the original, which only got better with updates, leaving Where’s My Water? 2 squarely in must-try column of my App Store spreadsheet.