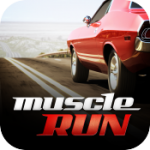 Let me start off by saying that I am a huge car nut. As well as reviewing videogames, I have spent nearly a decade as an automotive journalist and have been lucky enough to drive everything from three cylinder hatchbacks to 180mph road-melters (unfortunately, not enough of the latter). As you can imagine, for someone who lives and breathes cars, the racing genre is the obvious pick of choice when it comes to gaming.

Muscle Run (Free), however, isn’t your typical racing game. Yes, it’s a game about cars but think of it as something more akin to Temple Run than Gran Turismo.

Whilst not strictly an “endless" game. Muscle Run takes the approach of continuous driving whilst shooting for certain goals. These goals can range from attaining a preset maximum speed, to racking up a predetermined number of “near misses" with oncoming traffic. The goals are varied and increase in difficulty as you make your way through the game. 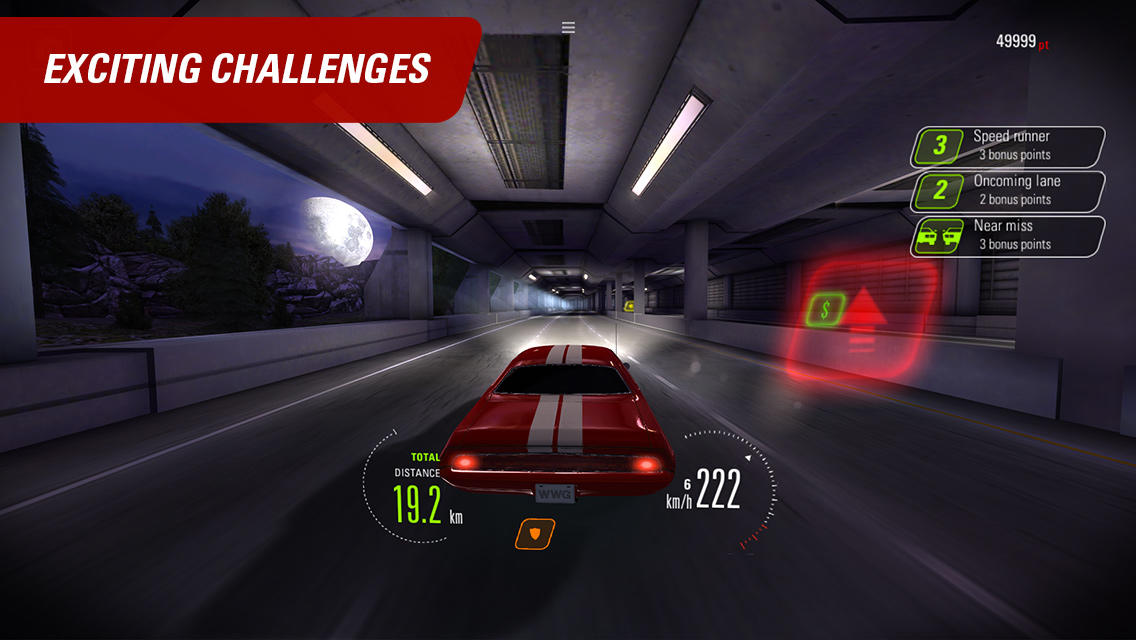 To do well and reach all of your targets, you’ll need the right set of wheels. There are six fantasy cars available, ranging across three types, Pony, Muscle and Hot-Rod. Only one vehicle is available from the get-go, others requiring purchasing via virtual currency or real world money via IAP. Each car can also be modified in steps, with performance enhancements boosting acceleration, handling, top speed, etc. To be honest I spent a little on upgrades but found saving my greenbacks for the hotter wheels yielded better results when it came to career progression.

Visually, Muscle Run is a fairly decent bag of eye-candy. The car models are highly detailed and the paint jobs gleam and glint like the real thing. The game takes place on a never-ending freeway and the background environment changes enough to mask the repetition well, lengthy tunnels and winding overpasses adding to the variety. 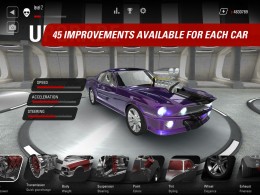 Unfortunately, the auditory nerves aren’t as pleasantly stimulated as their ocular brethren. Whilst the sound effects do a decent enough job of representing thumping, big-block V8 notes, the music sounds like something that would play at Cleetus and cousin Mary-Beth’s wedding – all it’s missing is a creepy banjo duel. The “rock" soundtrack is often at times extremely slow-paced and totally mismatched to a high-speed, velocity-based motoring game.

Play-wise, the cars handle as you’d expect from weighty, seventies metal and the feeling of speed gets the heart planted firmly in the mouth when whipping by big rigs and roadworks.

Of course, there is more to Muscle Run than simply meeting a bunch of preset goals. You obviously have to survive, which at times can prove rather difficult. Hit too many cars or end up in a particularly heavy meeting with an inanimate object and it’s game over. Similarly, take too much time (usually by crashing and getting your car stuck) and the police will arrive in time to chuck your redneck ass in the slammer.

To aid in your target achievement, there are several power-ups to collect along the way, including speed boosts, damage repair and cash. Unfortunately not all of the collectibles are helpful – oil slicks make your steering unresponsive and anchors will slow your pony to a crawl.

Although Muscle Run presents itself as a pretty, enjoyable “racer", it does have its fair share of flaws. The crash physics are not very realistic, opposing traffic at times can appear from nowhere and there are other weird glitches such as the HUD being stuck to the back of the car and strangely rotating with it at the beginning of each race… this may have been a design choice but it just looks odd.

To summarize, Muscle Run is a gorgeous looking, redneck sounding, enjoyable game. The cars aren’t impossible to obtain without spending real money and the varied goals and achievements provide ample “just one more try" moments. Whilst there are some annoying glitches and sub-par physics, not to mention the mullet-inducing soundtrack, the overall experience makes checking out Muscle Run worthwhile.