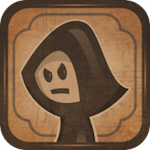 Game of Watchcraft: Spawn of Squishy ($0.99) takes only a few minutes to master, but Australian indie developer Clicker stretches that into hours by capitalizing on a retro style and offering minor incentives that encourage players to continue adventuring for as long as they want.

The concept is cool: Game of Watchcraft takes the MMO World of Warcraft and sizes it down to an itty-bitty LCD game like the ones you probably played as a kid — you know, those cheap, plastic portable gaming systems that ran just one game and featured lots of black, moving sprites or character outlines on a static background? I owned a Lion King handheld, and it was tough figuring out what was even going on half the time. Each new action takes a second or two to manifest onscreen. 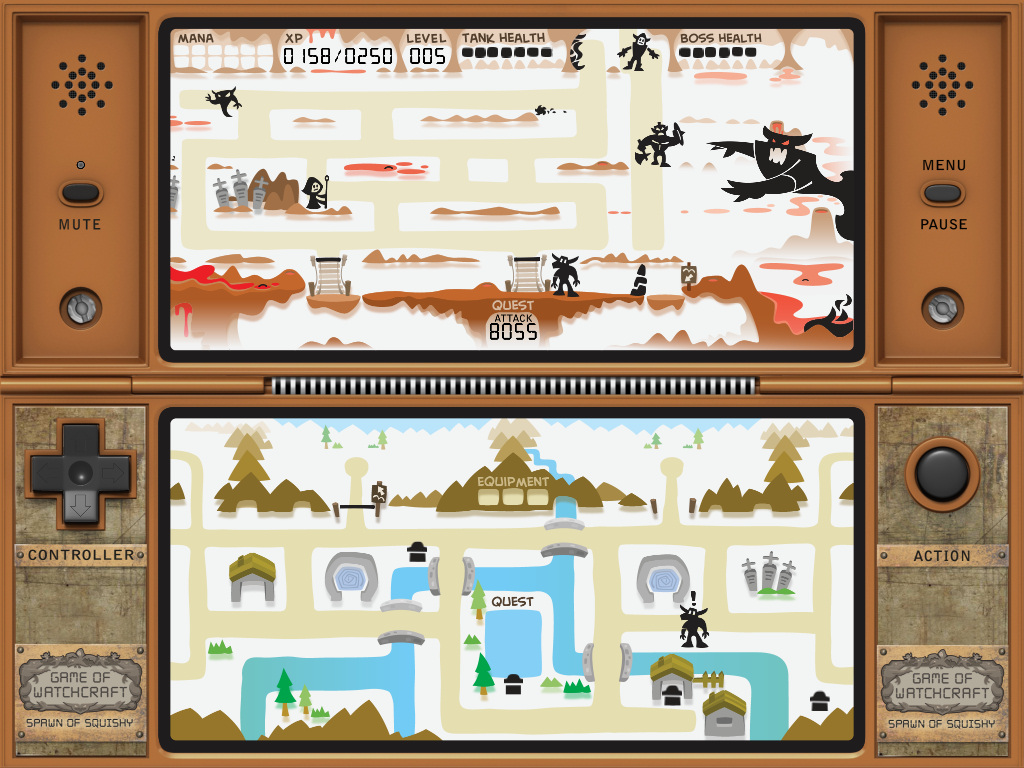 Lions and hyenas are one thing; a massive online world is another. While Watchcraft retains many of the components of an MMORPG, it simplifies them dramatically. Quests are as easy as collecting a certain number of treasure chests, killing monsters, or defeating a boss. Your mount is a winged creature that transports you from the relatively peaceful land of BottomScreen (yes, that’s what it’s called) to the treacherous TopScreen. And that’s pretty much all you do, over and over and over again.

Goblins are basic enemies that populate the bottom screen, and a water monster called a Naga bubbles at the surface of rivers and streams, hoping to catch players offguard. A single hit kills, so fast reflexes are important. You’ll need to tap (or hold) the virtual D-pad quickly to evade or hone in on foes and then press the Action button on the right to attack. The hero — a priest named Squishy — can use a basic dagger attack on the bottom screen, but on the top, he’s more versatile, able to shoot projectiles as well as execute close-range melee moves. Players will need that extra skill to conquer the giant demon, which lobs fireballs, summons minions, and flits up and down between three rows. 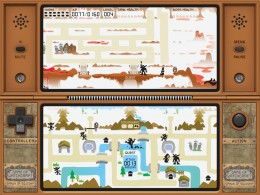 Dying won’t wipe your experience, thankfully, and the game lets you pick up and resume from whatever level you left off (unless you decide to restart from level one). The developer added in a fun feature where your character respawns at a graveyard and must make his way to his body to continue. This gives you a moment to recover at your own pace, but sometimes, especially if you died in the middle of a hot enemy zone, you can hop in your body only to lose the second that you do.

The top screen always involves a boss fight even if the quest goal is to slay minions instead. A healer waits in an upper corner, ready to restore mana bit by bit so you can fire off more projectiles at the boss. Linger too long, and a fire trap will catch you in its flames. A tank character will take some of the damage in the front lines so you can plan your attacks from afar, picking off minions as they spawn. It’s interesting how Game of Watchcraft makes use of different MMO tropes, and if Clicker really is planning more games like this one (as mentioned in the forums), then I’d be happy to see the other “demakes" they come up with.

I was actually surprised by how the top-screen events adopt a rhythm of their own. The various bleeps and blips — of shooting energy bolts, hitting the boss, and even regenerating mana — all culminate in a catchy, unique melody of sound. 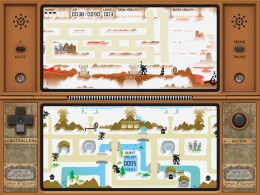 What I didn’t care for is the stickiness of the d-pad, which is reminiscent of classic games. Clicker seems intent on tweaking this to facilitate play, and it already feels better than it did days ago, so I wouldn’t worry too much about the controls if you’re thinking of picking this up. Players do have to read couple pages of instructions before diving in, which is an inconvenience, but it doesn’t take long. A playable tutorial would be better.

Game of Watchcraft‘s visuals are faithful to old-school LCD games, too. Tilt your device to the side or hold a finger to the screen, and ghostly imprints of the different characters and items are visible, like the digital residue that fades when you shut off a Game Boy screen.

On the topic of items, the real rewards are the three pieces of equipment you can obtain from completing the TopScreen quests: boots that increase your speed, a cloak that boosts mana, and a staff that grants a double cast ability.

Die even once after receiving any of these, and you’ll lose them. That’s the brutality of Game of Watchcraft: to spend minutes carrying out a repetitive dance with a boss only to lose to a goblin that got in a lucky hit. It’s not a challenge you’ll mind terribly, though, considering it extends the life of the game and contributes to the function and culture of the Game Center leaderboards. You can keep track of how many chests you’ve unlocked or bosses you’ve fought, and there are achievements for earning so many boots, the first of the special items, or holding all three at once. That’s how you know you’ve been playing awhile and that others have, too.

Boss fights and quests operate the same way: take one hit, and the boss’s health fills all the way back up, and quest progress resets. It’s frustrating, but hey, that’s an LCD game for you. Every ounce of success comes half from skill and half from sheer luck.

The price seems fair for this game as it lacks any in-app purchases and is low on content. I’d love to see the developer flesh the idea out more so players get a little more value for their buck. After all, these kind of games phased out of popularity for a reason.