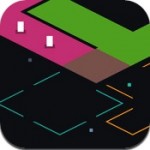 It took me a long time to beat Grapefrukt’s Rymdkapsel ($3.99) a second time, even after playing it for a week.

Martin Jonasson’s minimalistic, pared-down real-time strategy game is hard, no doubt, but I was also hesitant to wipe my winning station off the screen: around a brightly-colored core of barracks, defense rooms, and gardens, my space station’s halls stretched infinitely out into the stars, like a giant cosmic cephalopod whose legs only bend at right angles.

It was pretty, and I’d worked hard, and I wasn’t ready to erase it yet.

Rymdkapsel is a base-building game. Stranded in space, surrounded by mysterious monoliths to explore and resources to extract, you play as a deistic task-manager charged with assigning tasks to two-pixel minions and expanding a color-coded space station as far as possible. Gardens are green and kitchens are yellow, and you’ll need both in order to grow enough food to feed the would-be engineers, builders, and researchers living in orange barracks. 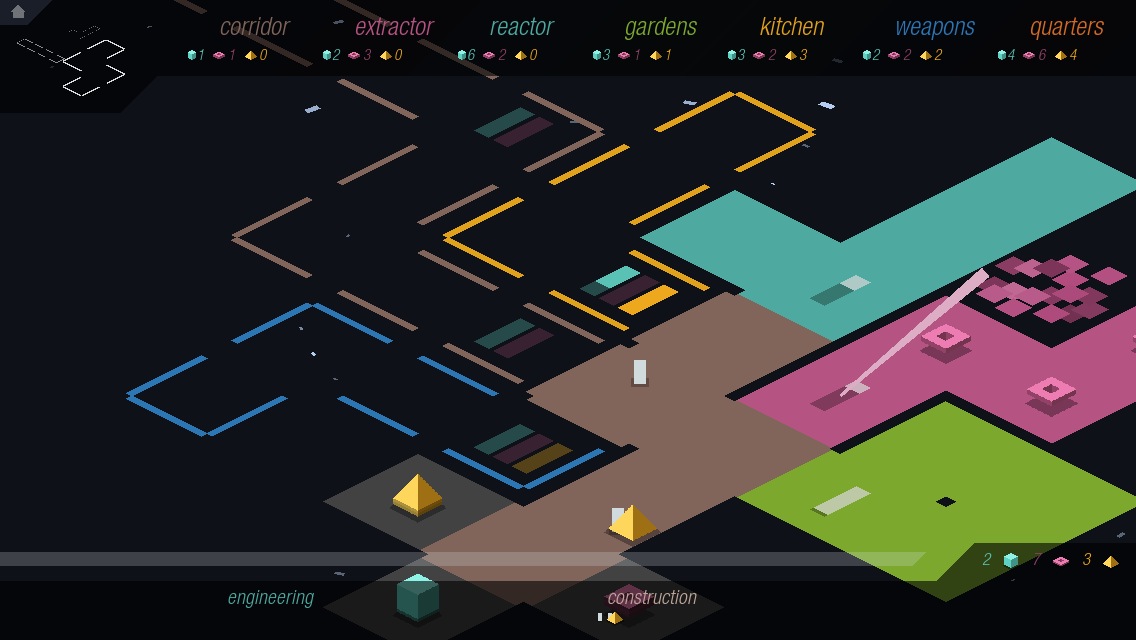 In Rymdkapsel, tetromino-shaped rooms can only be built on corridors, not other rooms. Once you drag-and-drop them into place, tap the screen to rotate them. You’ll need to expand your base far enough to reach each monolith (the game ends when all four are fully researched), but waves of laser-toting enemies will attack periodically. And … that’s it — Rymdkapsel‘s flat, primary-colored visuals and sparse synth soundtrack are perfectly matched to its simple, straightforward mechanics.

Jonasson’s game is a real-time strategy game without the variable minutiae that make the genre so traditionally opaque. There are only three resources to manage, one type of unit to build, and one type of enemy to ward off, and every element is visually represented by simple geometry or primitive pixel art. Nothing is modeled and rendered in 3D because nothing has to be: the fat has been trimmed and sculpted to its ontological limits, everything else is just strategic thinking and spatial awareness. 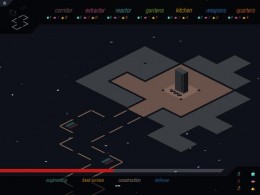 Rymdkapsel‘s real triumph is the way it squeezes complexity out of these basics. Bigger bases can reach monoliths faster, for example, but they’re harder to defend. The game also determines the shape of each room, as well — you may need a reactor room right now, but the next build will be a Z-shaped tetromino, which might not fit anywhere.

Every decision has a similar kind of push-pull, and it’s not long before Rymdkapsel expands into a deceptively complicated feat of logistics and planning. On the most granular level, aspiring architects will need to learn which rooms work together most efficiently, or how to shorten travel time by selling unused rooms, or which room orientation is best. You don’t want to lose valuable time making a disposable minion walk to the end of an L-shaped reactor, do you?

As a result, Rymdkapsel has a great sense of rhythm. You build quickly when attacks are few and far between and resources are plentiful, but as expansion slows down and enemy waves come more frequently, staying alive becomes more difficult and more frantic. The transition between each phase of play is imperceptibly smooth. Even when things move slowly on the screen, good Rymdkapsel players will be constantly making decisions and planning ahead, even as the nature of those decisions changes over time.

The beautiful thing about Rymdkapsel, then, is that its complexity grows as a function of player knowledge, not as a result of extra unit types or bloated, fiddly stats and figures. None of the decisions described above are “official" gameplay mechanics, but they are the natural result of looking into the game as deeply as possible.

It’s not so much that Rymdkapsel is designed around a central mechanic as much as it establishes two very simple rules and then brings its universe to life through arcane magicks. I get the sense that, if I could ever keep marauding invaders away from it long enough, my space station would continue to function eternally, even without my guiding hand, faceless white minions shuffling through empty corridors, carrying pink moon rocks, forever yoked to Jonasson’s impeccable sense of balance and timing.

If there’s a nit to pick, it’s that minions don’t have the most robust pathfinding skills. Because there’s no way to assign jobs to specific units, the grunts defending a base’s outskirts might suddenly find themselves trudging a long path toward the compact center as priorities change, even if there are other units closer.

Nevertheless, Rymdkapsel feels tailor-made for iOS in both form and function, and its elegant, subtle constituent parts nest within one another as neatly as its four-block tetrominos snap together along a space station corridor.