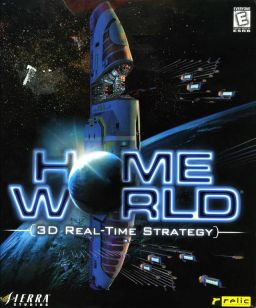 For better or for worse, my family’s computer in the late 90’s was a Macintosh Performa. Sadly, this made me miss out on AOL “pr0gz" like AOHell, Fate X, and similar, but worse still was not being able to play PC classics like Homeworld in their heyday. Originally released in late 1999, Homeworld was the very first fully 3D RTS in that the ships you controlled could be moved in any direction rather than being locked on a 2D plane like most RTS games out there. The game eventually saw an expansion, Homeworld: Cataclysm as well as a full sequel that was released a few years later.

Unfortunately, like far too many games of that era, the rights to Homeworld became mired in various weird business deals as it got acquired by different publishers before being finally rolled into the THQ katamari. When THQ went bankrupt earlier this year, the rights for the Homeworld series were once again up for grabs and Gearbox Software were the highest bidder.

Gearbox’s plans for the series were fairly nebulous:

Brian intends as first priority to direct Gearbox’s interest to preserve and assemble the purest form of the original acclaimed and beloved games, Homeworld and Homeworld 2, with the intent of making them accessible on today’s leading digital platforms.

“Leading digital platforms" for a PC game typically means “Steam" these days, but we might see more than just a boring old PC re-release. Per a twitter conversation with TouchArcade reader @nayansthankiya and Gearbox President Randy Pitchford, Gearbox is “thinking about" an iPad port, as well as how gameplay would work with the touchscreen.

Yeah, I know, a vague one-off tweet is about as far as you can get from any kind of confirmation on something like this, but it’s super encouraging that they’re even thinking about this. What’s curious about these old games is that mobile hardware now is basically way better than the PC’s we played these games on over a decade ago, so hurdles for ports are largely limited to intelligently implementing touch controls and jumping through the zillion flaming hoops for rights to the IP.

Either way, if we hear anything else, we’ll post it.