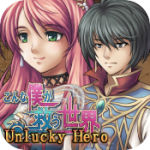 Ho hum, another month, another Kemco JRPG. Wait a minute, this isn’t a Kemco game. Yet it kind of is. Unlucky Hero (Free) comes to us from Exe Create, one of the handful of developers Kemco taps to make its smartphone games, in this case for the Alphadia series of games. Exe Create is also responsible for the well-liked action RPG Across Age ($3.99). They’re a pretty good developer, all things considered, but you never know what a team is going to be like when freed from restraints of a publisher.

To be on the level with you, what initially attracted me to this game was its awkward title and hilariously poorly-translated App Store description. It talks of “powers of wizardly" and “intelligence of fight", refers to a genre named “lanobe", and describes the hero using a Japanese word (hikkikomori) when the English equivalent (shut-in) would have been just fine. Anyway, I strapped myself in with full expectations of a shoddily-made, strangely-translated, dime-store JRPG. 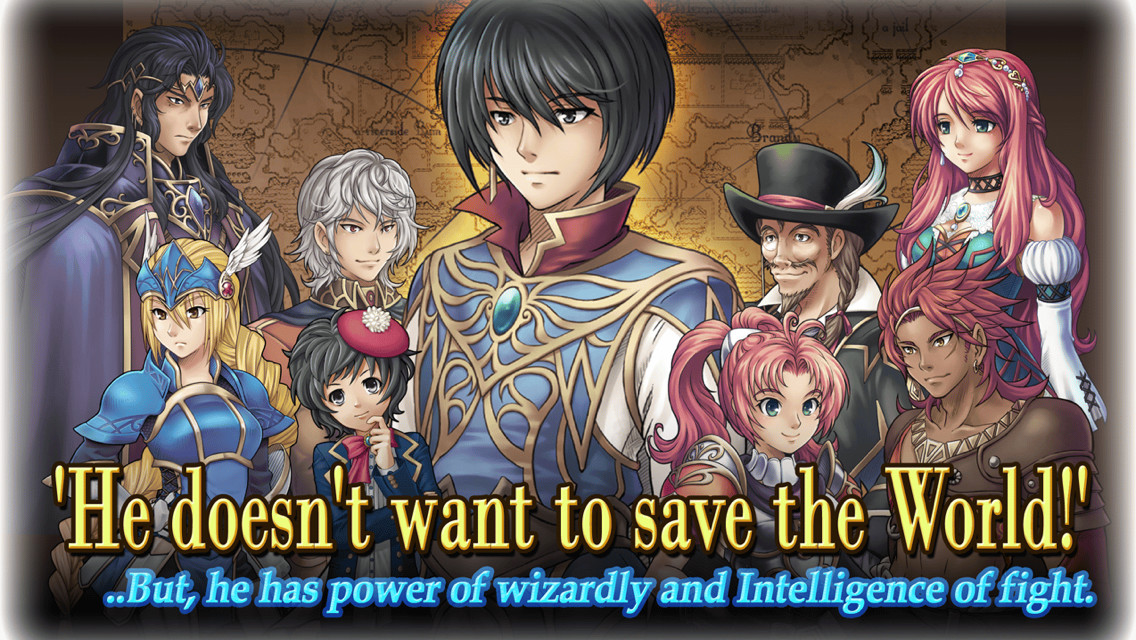 On starting the game, Unlucky Hero did little to shake me of my beliefs. The whole game is windowed, presumably to get around wide-screen requirements, and an incessant chime sound effect plays almost every time you do anything. There’s a bit of strangeness to the character movement as well, giving it a slightly choppy feeling. The main character, a mage named Jasper, was, as advertised, a weird shut-in, and the first story element the game stumbled into was an incredibly awkwardly-handled racism allegory. Yes, things did not look good for Unlucky Hero.

Still, I soldiered on, and after finally coming out the other end, I can report that Unlucky Hero is actually a really excellent example of the JRPG genre. As the story built and the world opened up, I stopped noticing the window and the weird animation. The chime, on the other hand… well, that’s what the mute button is for, I suppose. I think what really won me over were the characters. One of my main criticisms of Kemco’s smartphone fare is that the characters are just paper-thin walking tropes. They introduce themselves in an exposition-heavy way and rarely upset your initial read of their personality. Combined with a mediocre translation, these weak characters lead to a lack of investment in the story.

I’m not going to sit here and tell you Unlucky Hero offers a sublime tale with rich, well-developed, unique characters. It still has plenty of tropes and cardboard characters. What I will tell you is that I was pleasantly surprised at how well-realized the main cast were. Defying the horrible description in the App Store, the game has an excellent translation for the most part. The awkwardness that permeates most of the other JRPGs on iOS is only found occasionally here, and there’s a lot of flavor text to punch up things even as mundane as staying at the inn. The game takes a good amount of time to really let you get to know the characters, through actions as often as words. The main character’s arc is quite well-done, and he turns out to be an exceptionally likable fellow.

The story on the whole is more about his personal journey than anything else, but naturally that personal journey plays out over a background of war, princesses, evil sorcerers, alliances, and betrayals. The plot does slow down at times, but before long, it speeds things up again, which makes those slower points feel like deliberate relief in the grand scheme of things. This isn’t Final Fantasy-level stuff, but it’s somewhere between Breath of Fire and the Tales series, and that’s definitely a grade above what we usually get.

The gameplay is pretty standard stuff for the genre. There’s an overworld map with towns and dungeons that you’ll eventually get some cool transportation to traverse more easily. Battles are random and turn-based, with a side-view reminiscent of Final Fantasy. The wrinkle to the battle system in this game is the ability to set your formation. Your formation affects how much damage you deliver and take, and also determines which powerful combo moves you have access to. Only Jasper can change formation or initiate the combos, so you’ll want to make sure you take good care of him. There are some genuinely tough battles in this game and using the correct formation at the correct time is the key to winning them. 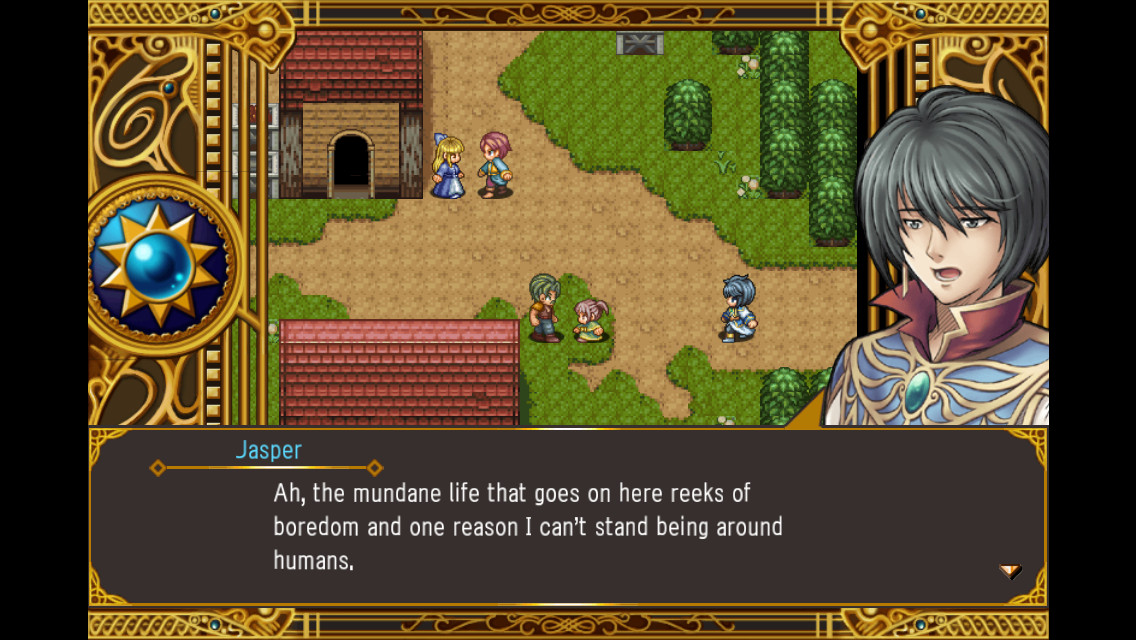 The dungeons are pretty well-designed on the whole, with lots of branching paths that will lead you to treasure. The regular monsters are actually a little on the challenging side in this game, so getting through the dungeons requires a little bit of resource management. Notably, magic is quite costly in Unlucky Hero, so you’ll have to think hard about whether you want to use those magic points for a powerful attack or a cure spell after the fight. My advice is to stock plenty of items, because especially in the early part of the game, your healing magic is woefully inadequate. Boss fights in particular can get a bit hairy since your healing magic is so weak. If you find things getting too hard, the game actually includes a difficulty setting you can adjust on the fly.

Apart from the overlay on-screen at all times, Unlucky Hero is a really nice looking game. It looks a clear step up from Kemco’s games, with a lot of sharpness and detail in the characters and backgrounds. It looks more like PlayStation-level 2D than SNES, and unlike certain other iOS JRPGs, it’s a Universal app. While it does re-use its tile sets fairly frequently, it always does so in a way that makes sense, so that you aren’t left wondering why an ancient ruin looks exactly the same as a modern castle. 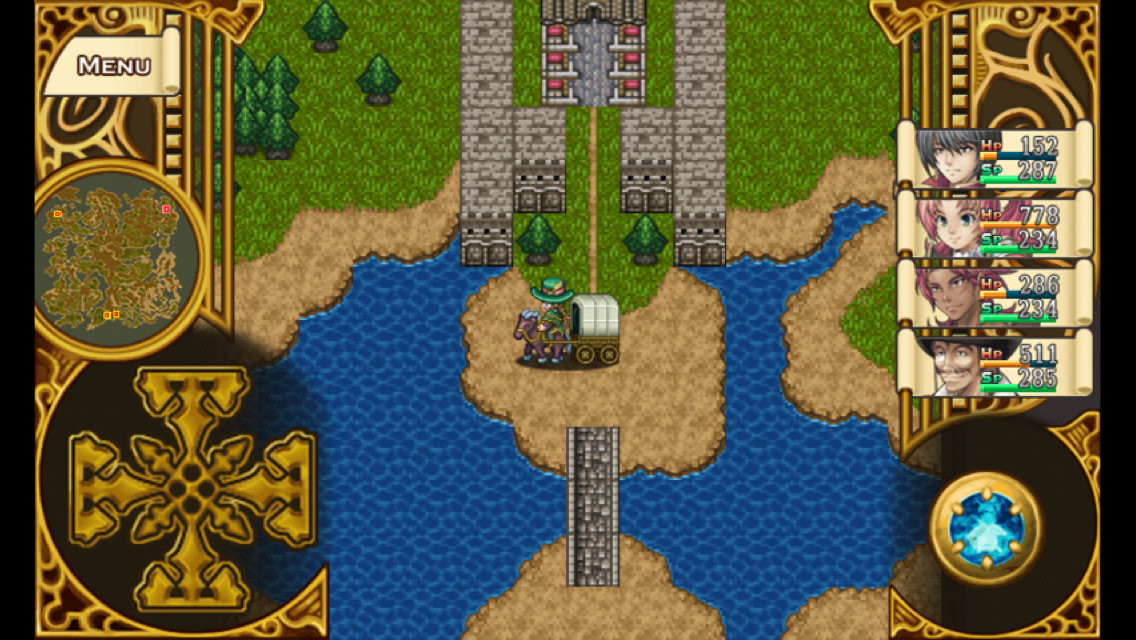 Controls are virtual-only, with no option for touch controls, but due to the size of the overlay, the directional pad works without too many mistaken inputs. There’s exactly one IAP in this game, and it’s the game itself. There are no dungeons locked to you, no items or cheats held tantalizingly out of reach, or anything like that. You can try the first part of the game for free, and after that, $3.99 gets you the whole game in all its twenty or so hours of glory. After the last few JRPGs I’ve played, it’s certainly a welcome sight.

I went into this expecting, at best, a mid-level Kemco RPG, so it’s kind of funny that this has turned out to be a better game all-around than most of the JRPGs available on iOS. It’s too DING bad that DING its biggest DING fault had to DING be something DING so hard DING to ignore DING, but even with that annoying sound effect, I still strongly recommend Unlucky Hero to anyone with affection for the genre. It makes an iffy first impression, but it’s definitely worth sticking it out.