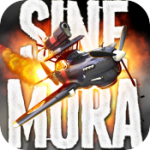 Originally released in 2012 on XBLA, Sine Mora ($4.99) was an excellent, well-received shoot ’em up that combined impressive visuals, enjoyable gameplay, and a narrative that weaved a story far above the standards of the genre. Fast forward to today and the folks at Digital Reality have seen fit to port their masterpiece over to iOS. Despite some possible issues with its controls, Sine Mora is an excellent port and really shouldn’t be missed.

Following the exploits of two groups at different points in time, Sine Mora‘s story is one of the most interesting ones I’ve experienced in a shooter. Half the game follows the journey of a father looking for revenge while the rest of the story follows the a group of Enkies (a race of time traveling beings) as they attempt to destroy the Empire that enslaved the majority of their race. Each chapter jumps between both story lines and time, with the events not necessarily taking place in sequential order. Of course, being a shooter, understanding the story isn’t necessary to enjoy Sine Mora, but folks that put forth the effort will discover a narrative that is surprisingly deep and very enjoyable. 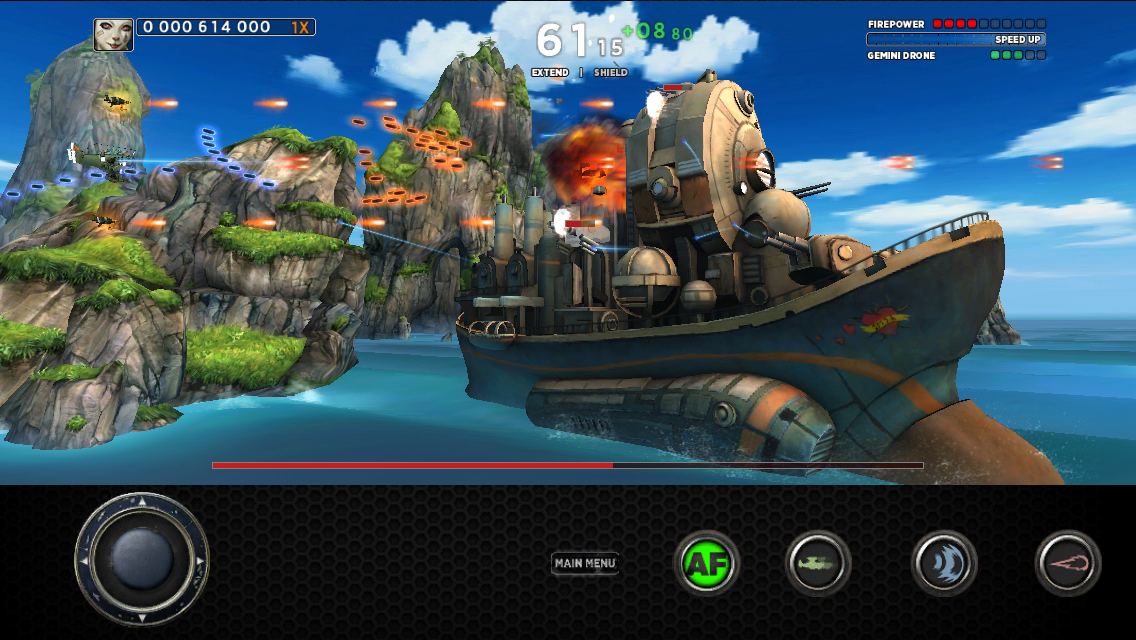 Keeping with the game’s overall story, Sine Mora‘s gameplay is also centered around time. Missions start with a certain amount of time on the clock, and players earn more time by destroying enemies and picking up special power-ups. Conversely, players lose time by getting hit by baddies or stray bullets. Last long enough in a mission, and you’ll eventually hit ‘time stability,’ which temporarily stops the clock (usually for a cutscene) and resets the amount of time you have. The game ends when you run out of time, forcing you to use a credit and start over at a checkpoint, or replay the mission all over again.

When it comes to actually playing game, Sine Mora straddles the line of balance in shmups. For one, it certainly isn’t a bullet hell-style game a la the Cave shooters. Sure, some of the bosses (which are all awesome, by the way) do enjoy spouting torrents of bullets to maneuver through, but the game’s relatively lax difficulty makes getting through this portions much more bearable. The same can’t be said for some of the game’s platforming portions, which required quite a bit of trial-and-error (at least for me) to get through.

For the most part, Sine Mora is a pretty great port with few issues. The game looks absolutely amazing on current generation iOS devices with little slow-down or other bugs. The music is also a highlight, particularly the boss battle themes which really added to the experience. However there were a few annoyances, such as the game requiring Facebook integration in order to post high scores and save data between devices. While that probably won’t be a problem for the majority of folks that use the social network, it’ll certain annoy those that aren’t (or don’t) want to use it. It’s a curiosity why Game Center wasn’t simply used but for now, it is what it is.

While the Facebook thing is more of an annoyance than anything else the game’s controls, on the other hand, has the potential to be a big issue. Sine Mora only comes with one control scheme, which has a virtual control stick on the bottom left, and four buttons governing the games controls lining the bottom black bar. There are no supplemental schemes to rearrange the buttons and, more importantly, there are no alternative movement controls such as ‘relative touch.’ For someone used to iOS shooters that come with a ton of different control options, this was a bit surprising.

Now, as you’ve probably seen in our forums, there doesn’t seem to be much of a middle ground as far as shooter controls are concerned. Some absolutely need relative touch, while others prefer virtual controls. While I’m more in the camp of the former, I have to admit that the more I played Sine Mora on my iPhone, the better I adapted. Platforming segments that were downright impossible were eventually passed. However, just because I managed to get by doesn’t mean that I still wouldn’t have preferred an alternative control scheme. In this regard, Sine Mora’s port disappoints somewhat.

Controls aside, Sine Mora is an excellent shooter, a great port, and just an overall fun game to play. The story and presentation rock, the mechanics are sound, and the game’s supplemental Arcade, Score Attack, and Boss Training modes offer a wealth of replayability beyond the fascinating story mode. If you have even the slightest interest in a shooter, Sine Mora needs to be checked out.