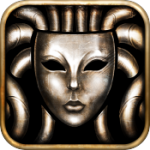 Witching Hour’s first iOS strategy title Ravenmark: Scourge of Estellion ($9.99) was a doozy of a mismatch between audience and delivery. One can’t help but wonder if sales fell short of what was deserved, and yet the developers refuse to shy away from the source of this problem. You see, it’s also the reason Scourge of Estellion‘s fans are as rabid as they are: the game was rather shockingly complex for the market. While there’s nothing wrong with casual play, it’s refreshing to find some meaty substance in a sea of generally simple and ephemeral affairs. And it was designed for iOS first.

Ravenmark: Mercenaries (Free), the follow-up, is currently my favorite mobile game. Take that with a grain of salt and an allowance for personal preferences.

It’s a top down skirmish director of the turn based variety, sporting three factions with differing styles. Estoran forces brim with gunpowder, steam, and technomagic and elven Varishah overwhelm with disorganized masses and underhanded tactics, while Tellion soldiers exemplify discipline and coordination. Each commander fields their choice of two brigades – unique combinations of soldier types, or elements, and arrangements – with whom to run down the enemy. Generally smallish boards peppered with obstructions to movement serve as the stage for showdowns. 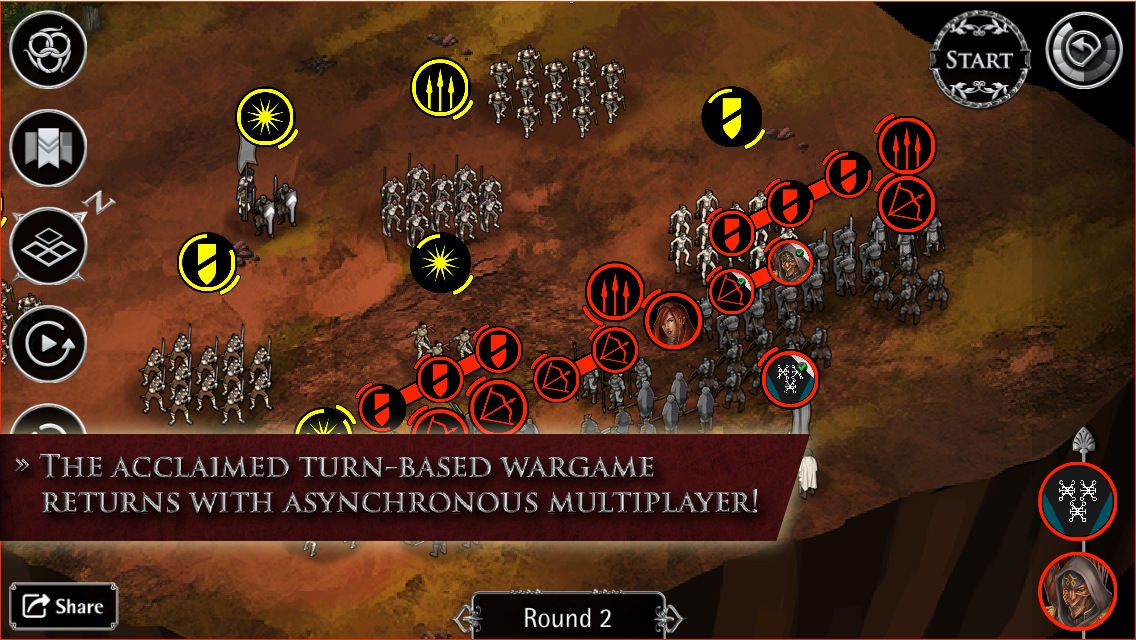 Little colorful two-dimensional digital soldiers sit frozen, arms ready, for word from above. They, and the landscapes they inhabit, are attractively drawn and interesting to look at. But, oddly enough, this is a game that looks better in screenshots than it does in motion. Animations tend to be about three frames long. Attacks repeat the same phrase a few times over, accompanied by a disembodied clashing of swords or a fwooshing of fletchings. Music is uniformly epic, generic, and forgettable.

Contracts serve as the anchor points for engagements. Rolled out before you, the map of Eclisse sprouts click-to-complete minor contract assignments at regular intervals, giving brigades something to grind their teeth against. Progressively more difficult border skirmishes, or an asynchronous multiplayer feature, have you bringing divisions to bear. After the enemy presents itself, a brigade from a customizable lineup is chosen to accompany that division’s headliner. Earnings are turned toward hiring additional mercenaries. 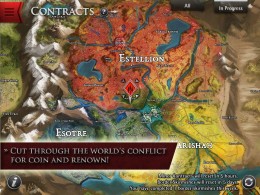 Each side queues up their efforts in parallel in a fashion very similar to Frozen Synapse ($9.99). Commands such as targeted pursuits, advancement orders, and formation controls are issued via branching menus. Action points limit the extent to which you may micromanage, urging you to create a hierarchy of importance for your intentions. It’s satisfyingly ponderous. Once locked into place, the battle phase crunches each side’s decisions together.

Orders are carried out in an order determined by the statistical initiative values of those involved, affording advantages to the fleet and quick. Zones of control offer a way to combat those who may try to dive past your lines. A new mechanical addition, they allow an element to snag and force an exchange on anyone sprinting by.

Elements can be knit together into cohesive, unified formations. This, however, severely limits control and mobility. Such is sacrificed for the sake of vastly improved resistance to frontal attacks. Often, some sort of element-specific boon is granted, like a bonus roll at a chance of extra volleys of arrows. Formations are terrifically powerful when used properly, but make it exceedingly easy to shoot yourself in the foot.

There’s a lot to take in; the above is a set of very broad strokes. Wrapping your head around the specifics and nitty gritties of the mechanics is likely going to be a struggle. There’s a picking of introductory bits and bobbles and missions, in which you choose a homeland and spring a jailbard, but this terminates in a very stunted tutorial. Basics are covered, but headscratching and confusion awaits as fighters quietly defy your tentative understandings and play by yet unknown rules. Do yourself a favor and study the codex religiously – the learning curve is steep, but things will fall into place if you persist. 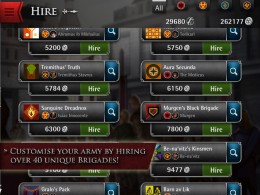 Based on what little does transpire during the initial guided events, I’m going to assume a bona fide story is forthcoming. Instruction may well expand when major contracts and story stuff is sewn in, but it’s sorely absent at release. The game is thick with untaught gameplay intricacies, but, again, they’re all detailed in the codex.

And, if you’re interested in a little reading, it’s a wonderful thing. This repository houses far more information than cold, hard inner workings. It’s also a vast store of lore: histories, mythologies, biographies, expositions on the political scene, even paragraphs of flavor text for each individual element. Eclisse is a world that’d been well fleshed out in the first title, and the wealth of writing has only swelled. It’s all there to read, the game just doesn’t do anything with it. Yet.

Now, this game’s precursor currently runs for a tenner (and is worth it), yet Mercenaries is free. IAP shenanigans will infest in the form of mid-battle fullscreen advertisements if you’d like to abstain from dropping some cash. A five dollar “collector’s edition” upgrade will remove them while gracing you with some banner customization options and unique brigades. Whether or not the rest of the campaign is going to be gated by a paywall remains to be seen, but there’s a complete experience to be had for free.

There’s also the matter of spending actual currency on fake currency: the flow of coin is obviously ratcheted down to encourage spending. The dreaded corpsejumper Kathiya Abrazar and her Barn av Lik will take a fair chunk of change, and by extension time, to hire into service. Fortunately, purchased divisions are hardly essential for success and the grind is alleviated, to some extent, by the daily freebies minor contracts represent.

Currently, Ravenmark: Mercenaries is the richest, most mechanically deep iOS game I’m aware of, even if it’s just skirmishes for now. This incarnation lacks any sort of direction or a goal to progress toward apart from leveling your soldiers and commander’s persona, but the existing forms of play are satisfying and engaging. There’s a wonderful and unlimited experience to be had without paying, which, in my eyes, largely excuses any lack of story – you’re not paying for an unfinished game. There’s a great deal of work and craft on display, and you absolutely should not hesitate to download it for free to give it a shot, quirks and all.