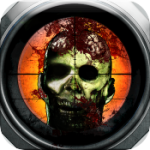 Everyone loves killing zombies, right? The thrill of some Rick Grimes or Daryl Dixon-like action never gets old. There’s nothing better than that post-apocalyptic feel you get when you hatchet off a zombie’s head or score a headshot.

Dead on Sight (Free), from indie development studio Bombhead, gives us the chance to score headshot after glorious headshot in a sniper-only game. You might not be able to use a hatchet or crossbow, but some cool comic book pages and several relentless zombies will keep your heart racing throughout this perilous, albeit brief, escape adventure.

With The Walking Dead still nailing top-shelf ratings on AMC, it’s no wonder that development studios seem to be pumping out endless zombie games. Combine zombie slaying with sniper gameplay and you’ll probably think to yourself, “Been there, done both of those things before.” But just wait because this game does have some deeper guts to it. 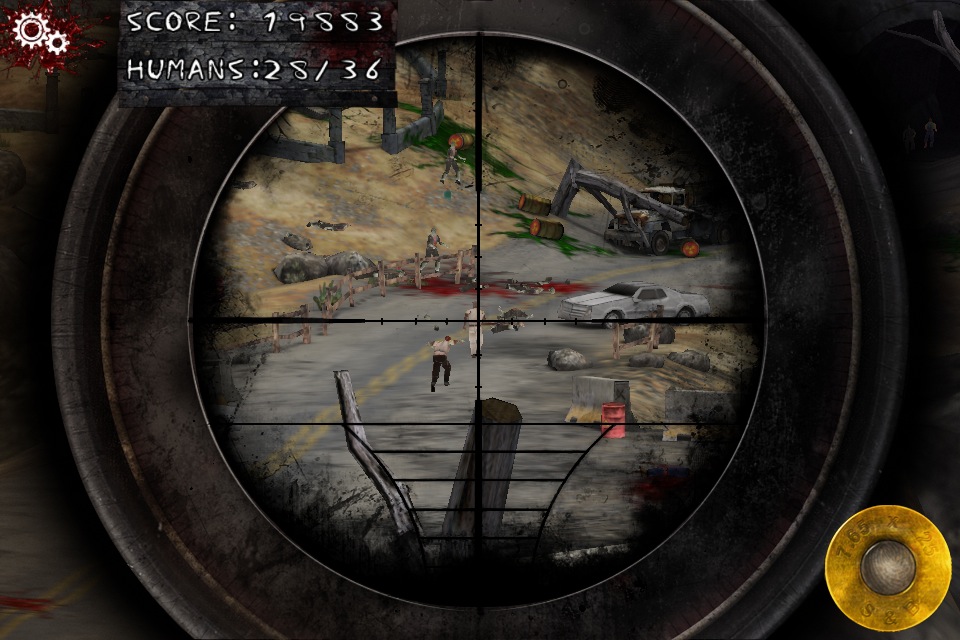 The story takes place in a town aptly called Resurrection… because the dead come back to life… Get it? Sadly, the townsfolk who moved here never realized that the town’s name was actually a self-fulfilling prophecy. Now, most zombie stories are throwaways on iOS. You get some text on screen to delay you from gameplay, but little else. Dead on Sight opens up every chapter a little differently, presenting the story as a series of comic book panel.

It’s pretty cool and the expressive comic art really gives you a sense of each character’s personality as well as the setting. The metal music playing in the background also pumps up the intensity a notch. Most comic panels are black-and-white, just like Robert Kirkman’s Walking Dead comic. However, instead of a splash of red, Bombhead gives us a splash of green… and red. 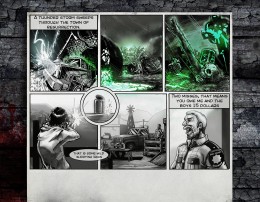 After reading a few panels, you’ll cut to Resurrection, where your character, Irwin, is perched and ready for some first-person shooter, sniper action. Visually, this is a town that feels straight out of an old west setting. Most of the locations look relatively similar, with small variations – such as a prison yard. The main thing that changes is your vantage point.

The first few zombies are relatively easy to kill. With a double tap on your screen, you go into sniper mode so that you can hone in on a target and get off the headshot. As you swipe left and right, you’ll see a nice little mix of people. There are police officers, flannel and overall-wearing hillbillies, prison guards and prisoners. Of course, they all look the same when you zoom in. It’s always weird to see five to seven identical characters walking around in the same proximity. But that’s how life is in the small town of Resurrection. Luckily, there’s no time to think about the NPC redundancy because these zombies are fast and fierce.

Your goal, as Irwin, is to keep the population of Resurrection alive and get them the heck out of town. When the zombies invade, they go on a feeding frenzy, killing all the townsfolk and turning them into zombies as well. Zombies die instantly with a single headshot and you earn the most points for Game Center bragging. Players can just as easily shoot the red exploding barrels to kill a group of zombies at once, just don’t accidently kill a human in the process. 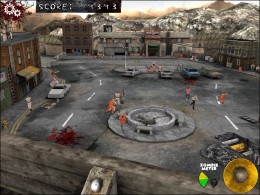 You can slow zombies down by shooting off an arm or two, even a leg, but they just keep on coming or crawling. Also, in the time it took you to lick off those wasted, other humans were probably getting turned. Thankfully, you never have to worry about reloading or ammo in this game because Irwin’s sniper rifle has infinite bullets and absolutely no reload time.

Alerts will pop up whenever a zombie is trying to climb a tower or break into a door. This helps you to quickly react and save the population of Resurrection from falling any further. There is also a zombie meter, which tells you how bad the town is being overrun. It’s game over when the meter hits the max level. Once you lose, there is no continue option and you have to start right back at the beginning.

Although the zombies are pretty smart about hunting down food, the humans are only relatively smart by contrast. Once a zombie gets near them, the humans bolt to hide inside the nearest building or to climb up the nearest tower. However, when they’re not being chased, the humans just mosey around as if everything is all right and there isn’t a swarm of zombies running amuck. Some of them even take a seat on crate. It’s a little odd.

The game ends when you leave Resurrection, which is a real downer. It would have been nice if Bombhead added in a few other locations so that you can take the survivors elsewhere and explore other environments.

Overall, Dead on Sight is a solid zombie sniper game. The action and gameplay are great. So is the comic book. I just wish there was a little more of it – outside of mini games. Our community has been chatting about Dead on Sight on our forums so be sure to check out what everyone is saying.