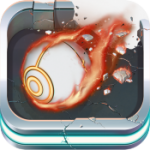 A long time ago, there was a computer game named Titan, made by a young company named Titus Interactive, who would go on to unleash all manner of Eldritch horrors upon the gaming world. Titan was an interesting game, starting with the idea of a Breakout clone and mainly adding the ability to move your paddle (now a square) in any direction. It sounds cool, and it was certainly popular enough, but that simple addition introduced some problems that are unfortunately still present in TITAN – Escape the Tower ($0.99) , a half-remake, half-sequel to the 1988 game.

The original game could be simply summed up as I did above. It’s Breakout, except instead of only being able to move left and right, you can also move up and down. To clear each stage, you have to break all of the blocks, without losing your ball. The stages themselves sometimes got to be quite complicated in their setups, sometimes bordering on being mazes.

Escape the Tower builds on this idea. Your cube is more easily distinguished as a little robot now, and it has a life bar that goes down if it touches any enemies, or if the ball or it touch any environmental hazards. You also have a selection of power ups at your disposal, collected from random blocks after destroying them. These offer assorted defensive (allowing you to freeze or destroy nearby enemies)
or offensive (multi-ball, a fire ball that breaks through blocks like a hot knife through butter) abilities, and are essential to progressing through later stages in any reasonable amount of time. 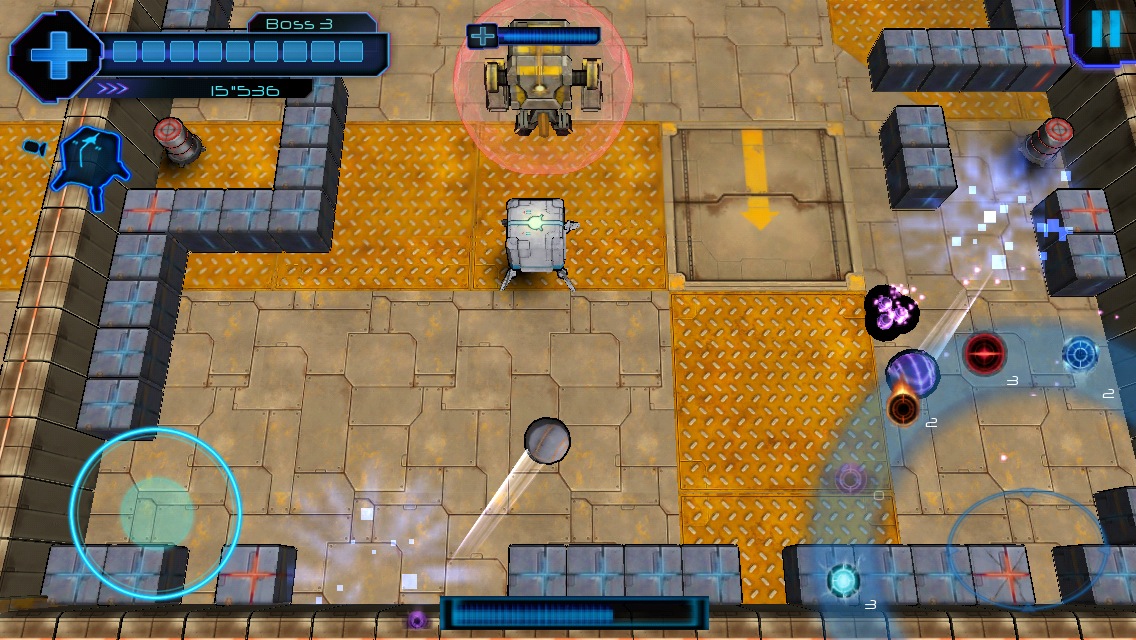 The game’s 80 stages actually have quite a bit of complexity to them, particularly if your only experience with block-breaking is something like Arkanoid or Breakout. There are the usual blocks that take multiple hits, but there are also blocks that you can only destroy by running your bot into them repeatedly, fields that allow your bot or the ball to pass through (but not both), teleporters, blocks that let you pass through a limited number of times before solidifying, and so on. Some of the stages are absolutely devilish thanks to the variety of tricks and traps. Additionally, at end of every ten stages, you’ll face a boss, whose arena often presents as much danger as the boss itself.

You only get one life bar for each set of ten stages and boss stage. There are pickups that restore a portion of the bar, but they are fairly rare, so you’ll need to avoid getting hit if you want to have enough life to defeat the boss of each round. On top of all that, stages are timed, offering a familiar three-point grade for finishing in set amounts of time. It presents quite a good challenge, even from the first set, so you’ll have lots of work ahead of you… provided you can wrangle the controls. 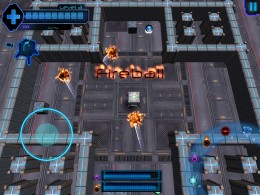 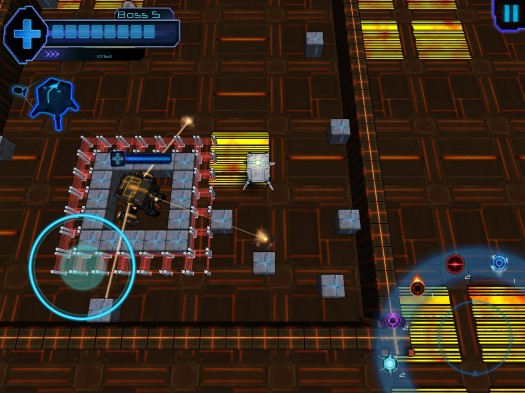 I mentioned at the beginning that the original Titan had a serious problem that came as a result of its chief innovation. Well, the problem is that it’s actually really hard to position yourself in such a way that you’ll hit the ball the way you want to. Even with a wider paddle and being restricted to left and right movement, it’s often hard to angle shots the way you want to in typical block-breakers. In Titan, you’re so small, and your movement is so sluggish, that you’ll often find yourself haplessly chasing the ball, trying desperately to get a good angle on it. The stages themselves are so large and complicated that the ball is often off-screen, making it virtually impossible to position yourself correctly.

That’s just the problem Escape the Tower inherits from its predecessor. Unfortunately, it also has its own problems, in the form of an absolutely terrible on-screen control stick. It’s the sort that repositions itself every time you lift your thumb rather staying in one absolute position. Response time is also pretty slow. In a very difficult game that relies on fast thinking and nimble fingers, this is an absolute game-killer. You’ll take cheap hits, miss shots you thought you had lined up perfectly, break blocks you didn’t mean to break, and curse the awful controls all the way through.

It’s a real shame, because the game is otherwise a fairly loving tribute to the original. It offers some substance well beyond the enjoyable but simple games we usually see in this genre, and the level designs and new additions are all very nice. The game looks great, the music is suitably retro, the UI works fairly well, but all of this is for naught thanks to some truly terrible controls.

In the end, it’s a little tragic. In spite of the original game’s popularity, there have not been many copycats of its unique twist at all. Its fans would surely welcome an update with as much apparent love put into it as this one. There were a hundred ways they could have dropped the ball, but the one way they did was probably the single most damaging thing that could have happened to a game like this. Although it’s clear a lot of thought was put into it, TITAN – Escape the Tower ends up being considerably more bitter than sweet, particularly for fans of the original.