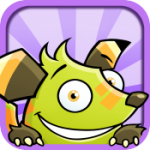 Take a look at that cute icon, check out those colorful screenshots, listen to that whimsical music. What kind of game would you expect Whirl the Squirrel ($0.99) to be? Unless you answered a punch in the face with brass knuckles, I’m afraid you don’t win the kewpie doll. What, one of you did? Go away, kid, you’re bothering me. Anyway, back to what I was saying. This game represents one of the more jarring mismatches of theme and difficulty I’ve come across in quite some time, and while that’s not necessarily a bad thing, Whirl the Squirrel goes perhaps a little too far.

When starting Whirl the Squirrel, you are treated to a pretty adorable little opening movie that sets up the game. Basically, some bad guys called Nenemies have jacked Whirl’s material possessions, and he needs to outrace them to get his stuff back. The characters are all very nicely designed. Whirl and the Nenemies are very cute, with a ton of personality. In fact, the art is really beautiful all around in this game. The stages are incredibly colorful, though there are only three different visual themes. Everything looks like it belongs, with none of the visual inconsistencies that can be found in too many other games. That “everything" proves to be a bit of a double-edged sword, but more on that later. 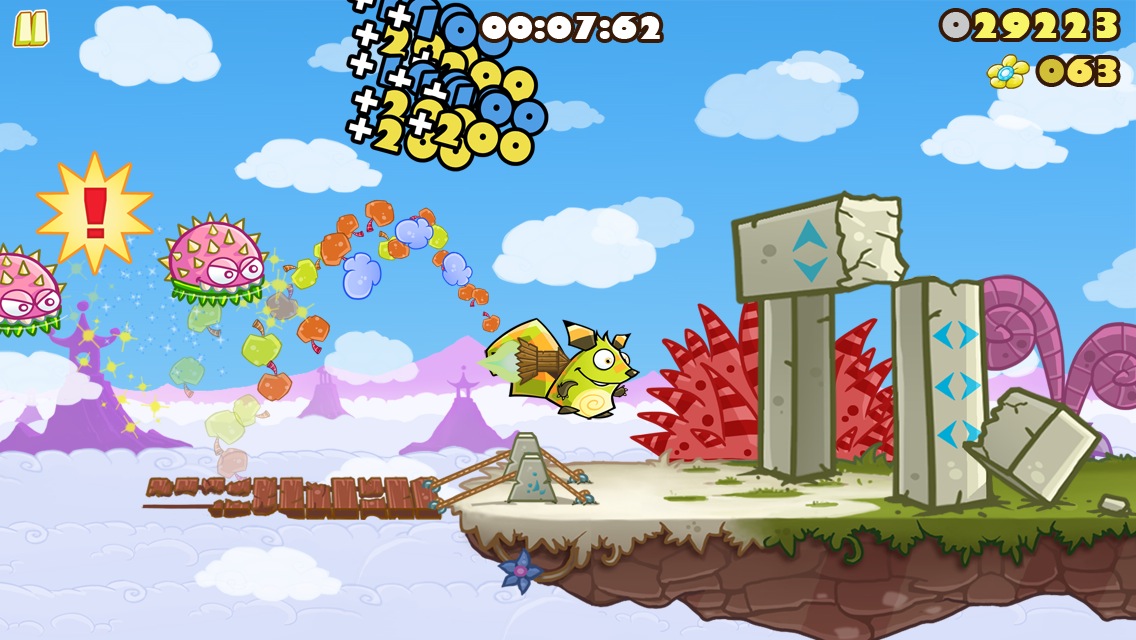 I’m happy to report that although the great majority of what you will be doing in this game involves running, this is not an endless runner. You have full control over going left or right using some very comfortable on-screen buttons. There’s also a button that allows you to jump, or if pressed twice rapidly, stomp the ground. Like other video game rodents, Whirl is a pretty speedy little guy, and by collecting flowers found in the levels, he becomes even faster. Fortunately, he’s always really easy to control, and I can’t say I ever had any frustrations with making him do what I wanted him to, apart from a little funny business involving his stomps when I pressed the button too many times.

Goals vary from level to level, but most of the stages involve making it to the finish line before a certain amount of time runs out. This is sometimes framed as a race against a Nenemy, but it will run the same route every time, so you’re really just racing the clock. The levels are huge and full of obstacles, and the margin of error on the clock is razor-thin. It’s very hard to win these stages on your first try. You’ll have to learn the stages first, and then execute them nearly perfectly. These straightforward racing missions comprise around twelve of the game’s eighteen stages. They’re tough, but there are worse things lurking out there in Whirl the Squirrel. 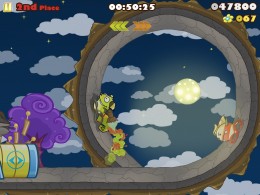 The other six stages still keep you moving pretty fast, but they’re a little bit more complicated than just getting from point A to point B. In them, you are tasked with collecting a certain number of flowers. In one type, you’ll need to collect the right amount and reach the goal, and in the other, you simply need to collect enough flowers before the clock runs out. The first time you’ll encounter this type of level is stage three, very early on in the game. Looking at it on paper, it’s not a very hard stage. You mostly go from one side to the other, dropping down at each side to collect flowers, and there are more than enough flowers to make your goal. Yet, I suspect this is where Whirl the Squirrel will end for most people who buy the game.

You see, you can lose the flowers you’ve collected in two ways. First, if you touch a Nenemy or other trap, you’ll lose ten flowers. Second, if you collect a blob item, you will lose one flower. If you take two hits from a Nenemy, you might as well reset, because you aren’t going to make it. As for the blobs, where there are flowers there are blobs surrounding them, particularly on the long drops. The last drop demands an absurd amount of precision and as a result, you will most likely end up losing more flowers than you gain. The whole stage, in fact, demands near-perfection in execution, a ridiculous notion given that this is stage three.

I eventually cleared it, but I had to memorize the stage first. The developer tries to put a lot of visual cues in so that you theoretically jump over things and avoid them even if you don’t know they’re coming, but the game moves incredibly fast and the art style causes things to blend in a little too well. As a result, you’re going to have to remember where the Nenemies are, where the flowers and blobs are, and where the jumping points are, because heaven help you if you make a couple of mistakes. There are secret paths and items that stop the clock to offer a bit of relief if you can find them. Races are slightly more forgiving than these flower stages, and the later flower stages aren’t nearly as nasty as the first one, but make no mistake about it, this game is quite difficult, and not always in a fun way.

As a result of the overall high difficulty, the games meager eighteen stages don’t go by quite as fast as you think they might. There is no IAP or currency to buy your way past a stage you’re stuck on, so you’re going to have to get it done the old-fashioned way, and that will take time. When it’s not being frustrating, Whirl the Squirrel is actually a very fun, well-made game. The graphics are great, though they could use some touching up to make certain hazards a bit more clear, and the controls are really responsive. If you can get over the early difficulty hump, the rest of the game is more enjoyably sadistic, as some members of our forum will gladly attest to. It’s just too bad that most people aren’t going to see anything past stage three.