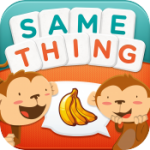 It’s an old improv game. Two people count down from three and try to say the same thing. Based on those two things, they try to find the commonality. So if I said “Boat," and my partner yelled, “Forrest Gump," we both might scream “JENNY!" It’s super fun, and gets the creative juices flowing, while allowing the two partners to get on the same wave length.

Now it’s an app for iOS and Android by SpaceInch and OK Go. Yes, that OK Go. Why? Because they’re OK Go, and OK Go basically owns the Internet. Don’t question it. It’s a fact. The app is called Say the Same Thing (Free), and it’s a surprisingly fun version of the game.

You play asynchronously, sending off words or phrases at your own pace. The interface is stuffed with personality. By personality, I mainly mean anthropomorphic monkeys that look like members of OK Go. It runs smoothly and does exactly what it advertises. Check out the trailer for a funny and surprisingly moving description of the game.

At the onset you’re given 50 bananas, the game’s currency, and starting each game will cost you two bananas. Guessing two words at once costs another banana, a random word generator costs another banana, and putting “stamps" on words (little faces or sayings) costs another banana. When you get below 12 bananas, you get another 3 every hour. You can find random opponents, or sync with Facebook or Game Center. I’ve been playing like crazy, but games tend to go on long enough that I’ve never run out of bananas. You can also plop down $2.99 to remove in-game ads, if you want.

There’s no doubt playing Say the Same Thing is more fun with real, live people. Just like poker, Uno, or Scrabble, it’s better in person. The creators of the app know this. They even recommend playing with real people in their “tips and tricks" section. Nothing beats that electric moment when, surrounded by friends, you and your friend say the exact same thing at the exact same time. This app got me as close to that feeling as I could expect on an iPhone.

The benefit of playing asynchronously is having the time to think up better, more creative answers. For instance, in one of my first games, my first word was “Ghost." My partner’s was “Greeting." We both, of course, said “Boo!" After one round. And I didn’t even know this guy. I kid you not! It was glorious. Absolutely glorious. 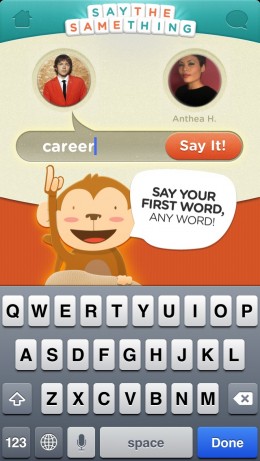 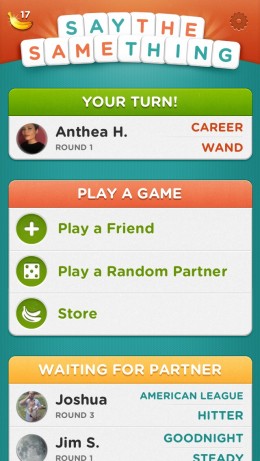 The point being that my friend and I are huge nerds. Wait, no. The point being that every game of Say the Same Thing can be suited to the weird idiosyncrasies you and your friends share. Or you can try your luck with the unwashed masses, and maybe you’ll have you’re own “Boo!" moment.

I doubt I’ll spend any real time on Say the Same Thing. It’s the sort of game you play for a bit until the notifications start bugging you, you turn them off, and then after a few weeks you forget it’s on your phone. But the price is right for checking out. And those individual moments, like when “Ikea" and “Food" turned into “Meatballs" and “Swedish Meatballs" which turned into “Bork" and “Specific," before meeting at the phrase “Swedish Chef," make this a very worthy download.