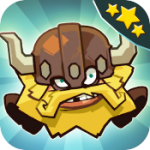 Developed by Nitrome and given significant love under the new Rovio Stars publishing program, Icebreaker: A Viking Voyage ($0.99) is likely going to be the next physics puzzler fighting for positioning in the iTunes top charts. The best way to see how the core mechanic of the game works is by trying the free 2009 Flash version of the game, which Nitrome seems to have heavily iterated on to produce A Viking Voyage.

In brief, the game revolves around you saving frozen viking trapped in ice. With a mixture of Slice It! ($0.99) Cut the Rope ($0.99) you’ll need to slice away parts of ice, and hopefully have them land in your viking ship where another viking will break the block if it’s small enough. The iOS version is greatly enhanced over the original Flash concept, with many environmental obstacles that interact in a clever way.

As you can see in the above trailer, there’s a ton of variety in the puzzles in thie game. We’ll have a full review shortly, but in my 10 minutes of playing it my initial impressions couldn’t be more positive. Definitely give this a look if you’ve ever remotely found yourself enjoying physics puzzlers.

Really the only bad thing I can even say about it is that the game isn’t universal, but, eh, Rovio’s way of doing things I guess.