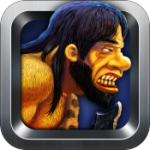 If The Wars II: Evolution ($1.99) is good at anything, it’s highlighting the futility of war. You will see several hundreds of your loyal soldiers dying for the cause of beating the hell out of your neighbours on the other side of the screen over many generations, seemingly without making much progress. ‘Loyal’ is one word for them anyway, ‘stupid’ could be another, but I digress.

On the surface, The Wars II is a standard side-on strategy game, where the player creates units to march slowly towards the opposition base, tackling enemy units as they go. However, the game’s unique selling point is its length. It’s an epic battle for once in the literal sense of the term: it spans generations. Once your troops have killed enough enemies, you’ll be able to level up to the next state of civilization, which spans all the way from men with clubs and cavemen on dinosaurs all the way up to robots with laser beams, via swords and gunpowder. 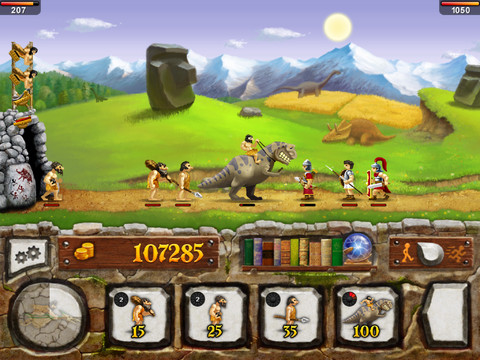 There’s a real advantage in evolving ahead of your opponents, as each level presents units which are far more efficient , allowing for some nice easy kills, but the game is well enough balanced that any advantage is pretty short lived before the opposition catches up, and their base gets a defense boost, stretching the war out longer. Due to the balancing of the gameplay, you won’t see any dinosaurs fighting robots, for example (not a sentence I ever expected to write, but there we are!)

It’s a really nice gameplay mechanic, and certainly keeps things interesting on the first play through. Unfortunately though, that’s just the problem: it’s kind of a one trick pony (or dinosaur to keep on theme). Although the game has 9 levels, they’re all the same thing with different levels of enemy AI. The developer challenges you to win on every difficulty level, but there’s no real incentive to do so unless you’re obsessed with Game Center achievements. If you start on Level 5, as I did then you’ll struggle to find the enthusiasm to complete it again on an easier difficulty level, especially when the rounds are pretty long. There is a speed-up button, but it doesn’t make it massively quicker. 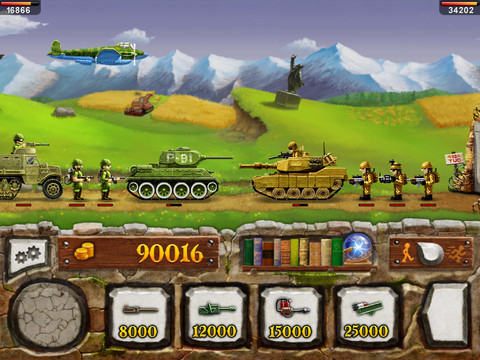 On top of this, the game believes in letting you figuring things out for yourself. True, it’s not the most complex thing in th world but a tutorial certainly wouldn’t o a miss in an update, as the base defense upgrades in particular are left totally unexplained. There’s no text attached to any of the unit or upgrade icons and you’re left to muddle through on your own.

There is a ‘How to Play’ section on the main menu, but bizarrely it’s more interested in telling you about the game’s features and offering vague tips than actually how to play it and what buttons do what. The graphics are sharp and full of character (though the animation could be a little more detailed), and the sound does the job, although it would be nice if the music changed through each era as well.

There’s a great game buried here behind the initial good idea, but as it is it’s just too short-lived and samey to justify the price-tag to all but the most keen strategy buffs. We’ll keep the faith that, like the units that keep getting better and better in the never ending war, the developer will keep refining the idea and make a third in the series.