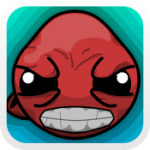 When it comes to differentiating your game from the pack, a little eccentricity goes a long way. Butterscotch Shenanigans must take this to heart as each of its titles ooze with quirky characters and a unique sense of humor. Quadropus Rampage (Free), the latest from the developer, doesn’t deviate from this standard. Luckily, it’s also a great game as well, merging brawler gameplay in a rogue-like shell making the freemium title worth playing.

Tasked with dealing with the usurper King of the Sea as he attempts to invade the land above, Rampage has players guiding Tack the Quadropus through the depths of the sea to dispatch the aquatic army of the sea. If you’ve played Butterscotch’s previous titles, you’ll be greeted with the same colorful narrative and art style that graced the likes of Towelfight 2. 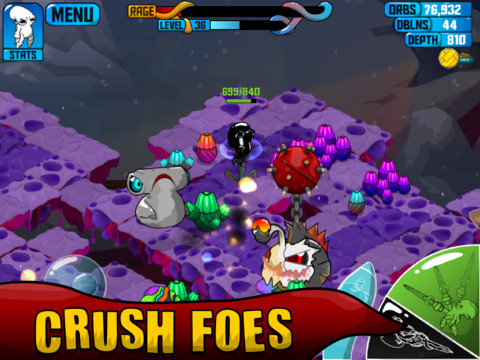 In case you didn’t get a chance to check out our earlier preview, the best way to describe Quadropus is part-roguelike and part-brawler. Tack dives from level to level taking on the aquatic enemies of the deep. His arsenal consists of a simple attack with his weapon, a short-lived bubble shield which prevents damage, an ink move that allows fast movement past enemies  (and over pitfalls) and a few special moves. When all the enemies are taken out, a teleport to the next level is opened, and the cycle begins anew. If players fall, they start again from the top and begin the journey again.

Despite the limited attack moves, I was pretty impressed with how strategic Rampage can play. Enemies come at you in a variety of different ways from projectiles to lasers to butt-stomps. While the first few depths are relatively easy, you’ll find yourself needing to dodge, protect and strategically attack soon afterwards. It’s also gratifying to gracefully maneuver Tack around hordes of enemies and dispatch them. Rampage’s control scheme, while looking unseemly to the uninitiated, actually works quite well in allowing players to accomplish this. 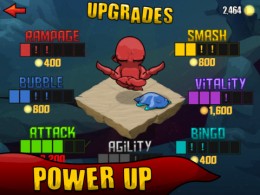 Quadropus Rampage is rogue-like in the sense that each depth level is procedurally generated with different enemies, rewards and weapon drops. I particularly loved the weapon drops as the weapon names, while randomized, are hilarious on their own. Names aren’t the only thing randomized, of course, as stats, attack range, and even attack speed all vary widely with weapons. While I wish there was a way to improve weapons so you can keep them a bit longer during runs (turnover is pretty high), at least another crazy weapon isn’t too far away.

Tying the game together are a bevy of long-term Mastery objectives, stat-boosting items  and the standard two-prong freemium currency system for stat increases. Masteries unlock after completing an objective (for example level up 25 times over all runs) and give players an opportunityt o pick one of two traits under that mastery. Traits are perpetual for all runs and can be changed at will between runs. I really enjoyed the Mastery system as it does a great job fusing long-term objective goals with actual rewards that make a difference during play. It makes achievements in Quadropus actually have meaning, increasing replaybility.

The dual-currency, meanwhile, is what you’d expect in a freemium environment. Orbs are the common currency, are earned (rather liberally) during standard play, and are used to purchase permanent stat upgrades and purchase weapons from a random shopkeep during runs. Doubloons are the premium currency and can be found sparingly during play, bought in-game with orbs (only if the shopkeep offers it) or purchased via IAP. Doubloons are restricted towards early unlocks of masteries (i.e. unlock traits without completing the requisite objectives) and resurrecting a run. Unlike most freemium games, doubloons aren’t required to experience the whole game or to even enjoy the game to its fullest. This is freemium done well and I appreciate the way Quadropus Rampage implements its system.

There’s very little to complain about with Quadropus Rampage. It’s an excellent roguelike/brawler hybrid with a control system that matches the fast-paced action. In addition, the randomized aspects, long-term Masteries and upgrade systems do a great job keep you playing. Finally, the story, humor and overall tone are simply amusing and make each run a fun experience. If it was paid I’d recommend it whole-heartedly, as a free-to-play title, you have no excuse to quit reading and download it right now.