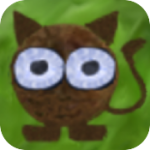 I’m not sure if I should be indignant. Cats have been used to paw at my interest, and successfully. Granted, Jindrich Stefan‘s Cats, Flowers & Labyrinth ($2.99) doesn’t reek of the sorts of cloying appeals to internet obsessions often found elsewhere. Rather, this story of Marvin’s love for his kitty, Kitty, proffers an arts and crafts aesthetic that’s genuinely, quietly adorable.

Our hero, formed from construction paper circles and triangles, navigates his way over a pond of callow brushstroke waves and chalk fishies. I’m reminded of Leo Lionni’s Frederick set to gentle Italian cafe music. I don’t think I should be indignant.

Cats, Flowers & Labyrinth is an unassuming collage of familiar puzzle types. A dash of Pac-Man, a large helping of 15-puzzle tile sliding and Pipe Dream, and a bit of single-pass route planning. Like the schoolhouse mediums forming its art style, they work together without stepping on each other’s toes, nor do they synergize to create anything truly special. 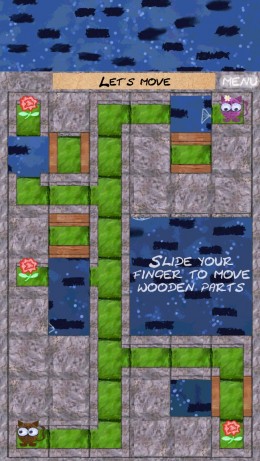 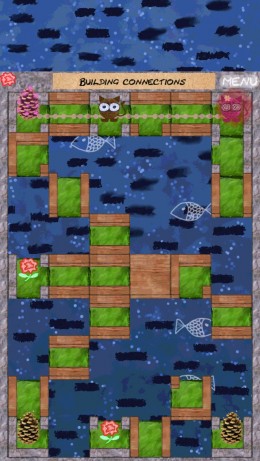 Kitty sits passively, waiting for you to collect her, as your finger drags around wood-floated tiles of grass. For optimal chin-scratching, pick her up after collecting the optional trio of flowers spread about. Tile sliding is a constant element, though in lieu of forming complete images, the 15-puzzle elements find their layouts in the cross-pollination of the various other puzzle types.

In every level, a handful of “L” shapes of each orientation, lines, and plus sign shaped pieces are used to form bridges around stationary stone platforms. Once in a while, they’ll sport the sprouts of rose bushes whose adult lives are ushered in by the tinkling steps of padded feet, preventing repeated use.

Sometimes, a smattering of keys need to be collected to free Kitty for pickup or evil diamond monsters threaten to end one of Marvin’s lives. Signaling his destination with a tap, the furball needs to be shuffled about each board in varying combinations of these puzzle styles. This shifting amalgamation does a fine job of staving off repetitive gameplay.

Squarely more than a mere collection of similar puzzles, Cats, Flowers & Labyrinth feels alchemical. A cute little app whose elements, usually separately working different parts of the brain, blend into a puzzle smoothie. Each ingredient is a familiar something you’ve eaten many times before, but Stefan is mixing up some atypical and tasty drinks.

It’s very pleasant. The sort of game that’d turn an otherwise bothersome bus ride into a congenial respite. A thoughtful distraction that leaves a bit of warmth after it passes. Just… nice. Quite nice.