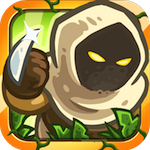 After playing Kingdom Rush: Frontiers a bit, it’s clear that it definitely delivers one thing: more Kingdom Rush (Free). In other words, it doesn’t break the mold; it adds to it. The new towers, new heroes, a new world, new enemies, and the addition of hero skill trees enhance an experience that its predecessor laid the groundwork for. It’s a pretty good game almost by default since the first was great to begin with.

Eli and I gave it a spin the other afternoon, and we documented some of our adventure with moving pictures. In the below, you’ll see some familiar mechanics and faces, and get a taste of the new stuff that’s been added:

It’s probably pretty plain, but if you liked the first game you should probably think about grabbing this one. The spot of design that’s really hooking me this time around, oddly, is the brevity of the levels. Kingdom Rush has super short instances that give you some good challenge without requiring your afternoon in exchange.

As with most of tonight’s releases, Frontiers will be available in the US at 11PM. You can add the game to your Watch List on app if you’d like to get a notification when it hits the App Store. You know, just to be safe.

CORRECTION: Kingdom Rush Frontiers is not universal. There are two different iPhone and iPad versions of the game.