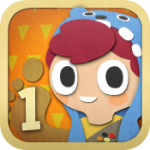 “People in weird uniforms yell at you, control when you wake up, when you go to bed and every last thing you do all day. It’s either evil or it’s the army!"

And thus begins Jacob Jones and the Bigfoot Mystery: Episode 1 ($1.99), a cute puzzle adventure by Lucid Games. You play the role of Jacob Jones, a little boy being dropped off at Camp Evil Feath—sorry, that’s Camp Eagle Feather, by his mom and dad, who are about to embark on a fantastic journey. And, naturally, you’re not going with them.

The first thing you’ll notice upon launching the game are the graphics and the set design. Jacob Jones was built using the Unreal engine, and even though it doesn’t look as realistic as what you might expect from an Unreal-based title, the game’s visuals are fantastic. The characters, items and world all look as if they were cardboard cutouts, with seams on the character models to match. Details definitely make the game here, from leaves blowing in the wind to snot coming out of the kid’s nose before slowly retreating back inward. For a high-end, cartoony look, Jacob Jones comes across as nicely put together.

Your journey starts simply enough, and before you know it you’ve made the rounds and are introducing yourself to the rest of the camp. You have an eclectic, if not cliché, cast of characters here. There’s the old lady, Mrs. Haggardy, who founded and runs the camp and is quite cantankerous. There’s the science counselor, the quirky, young and bubbly woman, and, naturally, the hard-ass phys ed coach, who hates you from the start and threatens to put you in the cooler. 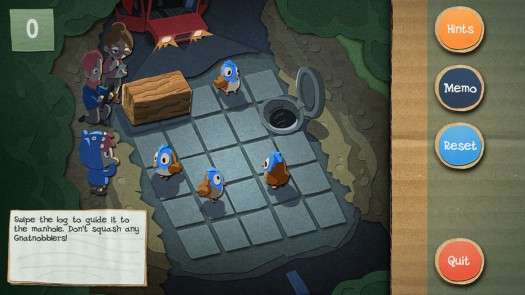 The rest of the cast is rounded out by the boys of the camp, such as Deathkill, a nerdy kid who wants to form a death metal band, and Billy Jackson, who is the traditional weird kid, as well as some friends from the girls camp. Some of the characters have names which act as puns. The first time you meet Eydel Hans, a lazy groundskeeper, you can’t help but smirk.

After finishing the game in just over two and a half hours, I can safely say there are parts that are very reminiscent of many animated Disney films; some of the jokes and puns will make your kids smile and laugh, but as an adult, you’ll clearly see the humor that is not so child-friendly.

Jacob Jones has a whimsical, if overly repetitive soundtrack behind it, which flows with the game nicely. Each character is fully voice-acted, and most of the actors do a very good job making their characters sound believable. I found Deathkill to be rather annoying with his constant mutterings of “dude” and “doofus”, however.

While you may think that Jacob Jones is a point-and-click type of game, you’d be greatly mistaken. The main aspect to the game is exploration, and you swipe left and right to explore the different areas, then tap on a location to tell Jacob where to go. You can tilt your device to see in the corners without needing to actually move, but I found I didn’t use this option much. There are two main hidden items to collect; birds called gnatnobblers and soda cans. The former count toward achievements, and perhaps will have a use in future episodes, while the latter earns you cell phone credits which are used to purchase hints for the various puzzles. 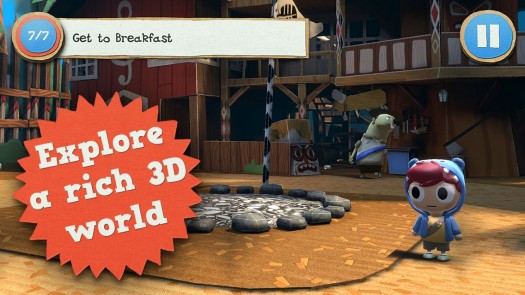 Boy, those puzzles. They run the gamut from yawn inducing to I want to throw my iPad over the balcony and then jump on it for good measure. You have the typical puzzles you’ll find in most games, such as sliding puzzles, Tetris-style puzzles, and ones where you have to figure out which item doesn’t belong, but Lucid Games has come up with some pretty clever ones as well. At one point, you have to free a character from a trap who is dangling from a tree. To do so, you’re required to pull a series of strings, tied by knots, until the strings change color, which indicate they’re about to break. Make them all change color and the puzzle is solved.

Completing puzzles earns you Merit Points. Some puzzles start you off with a certain amount, and if you fail, that amount drops. I found that the minimum number of merit points you could earn is half of what the maximum amount of points you could earn are. Collecting a certain number of points unlocks achievements for you, but other than that, they seem like what could have been a currency, yet have no value otherwise. Depending on the puzzle, you’ll also be shown how the puzzle works, and how many moves are needed to complete the puzzle. It’s nice to learn, but there’s no real benefit to going back and trying to complete the puzzle again; the only thing you’ll receive for beating it in the minimum amount of moves is an achievement to reflect that you did this.

One feature I really liked with the puzzles is the memo system. By tapping a button, the game puts a white overlay on top of the puzzle, and allows you to make markings, drawings, or putting down numbers to help you figure out a puzzle. I found that I only used it once, but it’s a nice feature to have, and doesn’t require you to buy it like a hint.

You’re given lots of help with the puzzles, as well. There are three hints you can buy per puzzle. The hint book provides a very vague hint, in a series of what looks like forum messages. Calling your Uncle Ed will give you another hint, which is usually enough to make you go, “ah, yeah, that’s it!" Finally, calling your Big Bro will give you what amounts to the answer, and takes out 90% of the guesswork. There’s also the Puzzle Pass option, which completes the puzzle for you and gives you full points for it. You only have one of these, but you can buy more.

And that’s all you can buy in this game. The only IAP available is the puzzle pass purchase, which will run you $0.99.

Jacob Jones and the Bigfoot Mystery: Episode 1 – A Bump in the Night is, at its core, a simple game with a mix of challenging and dastardly puzzles thrown in that will be enjoyable for both adults and kids. It’s a little on the short side, has zero replay value, and has some odd design choices (merit points which accrue but do nothing, for example), but Jacob is one of those characters you can get behind, and you hope the best for him, even though the odds seem stacked against him from the time he gets out of the car until he — well, you’ll have to complete episode one to find out for yourself.