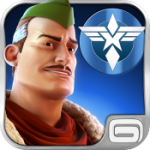 It feels like every discussion with Gameloft inevitably devolves into a discussion about their tendency to make games that are greatly inspired by others. While originality is obviously an important element, I care less about that and more about whether the game is simply fun. Such is the case with Blitz Brigade (Free), a game that takes its cues heavily from a certain Valve game. While Blitz Brigade won’t win any points for innovation, the team-based FPS gameplay works well enough to overcome its freemium shell be enjoyable on iOS.

Have you played Team Fortress 2? If so, then you’ll know what to expect with Blitz Brigade. The cartoony visuals, player classes and team-oriented play are very reminiscent of Valve’s long-standing F2P FPS. As you might expect, Blitz Brigade is multiplayer only, and players are matched up into games with a maximum of 6 v 6. A total of five character classes can eventually be unlocked, and a multitude of weapons can be purchased and used. 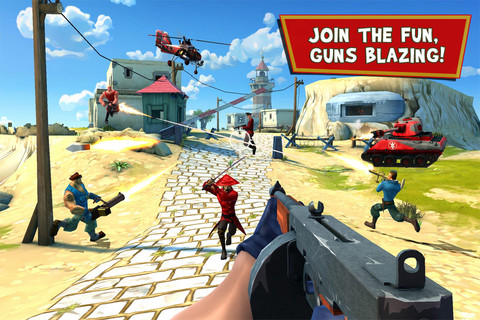 Seeing how this is an iOS freemium game, Blitz Brigade does have a few differences from its inspiration. For starters, the game features a standard duel-currency system which is used to upgrade weapons. Coins are earned during normal play and are used for purchasing weapons and single-use power-ups. Diamonds, meanwhile, are primarily earned through IAP and are used to purchase diamond-only equipment, fast-track weapon upgrades and special appearance items. As one might expect, diamond-bought weapons are a bit more powerful than their coin counterparts, so it’s relatively easy for a newcomer to buy their way into powerful stat increases.

While this is can be a concern, especially for a multiplayer-based game, I didn’t find it to be as big a deal as one might think. Due to the touch-based controls and the inclusion of auto-aim, Blitz Brigade does a decent job of giving players an opportunity to succeed, regardless of how much you’ve paid for powerful weapons. Hitting objectives, sneaking up on players, and sniping with a steady hand still go a long way. Competitive gamers looking for a purely equal footing will certainly not be happy with Blitz Brigade‘s underpinnings, but for most others it’s satisfactory. 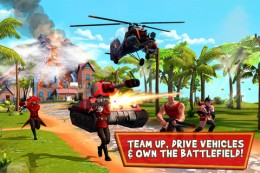 More importantly, I found matches and standard coin collection to be enjoyable. Sure, there aren’t any treasure chests or collectibles as in TF2, but the coin rate during normal matches (assuming you make at least one IAP purchase and obtain ‘VIP’) is fair and there’s enough long term goals and challenges to keep you playing.

The above enjoyment assumes you get into a match that’s lag-free which, unfortunately,  is harder to come by than it should be. It’s a shame too, because matches with high latency are completely unpredictable and simply not fun and I encountered more than I’d like when getting assigned into games. Adding to the annoyance is the fact that even simple things like logging into the multiplayer infrastructure can take whole minutes if the server is under load.

Otherwise, my biggest complaints were with the lack of game modes (only Team Deathmatch and Domination currently exist) and the limited selection of stages. Weapon durability, which lessens the strength of your weapons the more you use them (until you pay coins to fix them up), is aspect of Blitz Brigade that I really feel is pointless. Is it a deal breaker? Not particularly, but it’s annoying nonetheless.

While Blitz Brigade offers an enjoyable experience in team-based FPS gameplay, the overall experience is still clouded by freemium add-ons that add unnecessary annoyances. Unfortunately, this description is the norm rather than the exception in this day and age. If you’re looking for a multiplayer oriented FPS that will have a player base and receive support (at least for the short term), by all means check out what Blitz Brigade has to offer. Just be forewarned that this isn’t your PC’s F2P shooter.