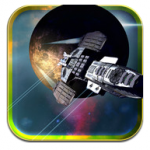 I’m a sucker for throwback games. The original Mario Bros. Tank. Ms. Pac-Man. Crystal Castles. I love them all. Starship Battles drums up fond, and not so fond, memories of Missile Command, which I played the hell out of on Atari 2600. Destroying lines that fell out of the sky with blue-purple explosions was a guilty pleasure. Well, that is until the entire screen was filled with lines and my base was wiped from the face of the galaxy. Sigh.

Starship Battles ($0.99), from Empty Flask Games, updates the Missile Command framework with high res graphics. However, it’s still a survival game at its core. Instead of a land-locked base, you’ve got a cruiser spaceship. Don’t be fooled by the name, this cruiser is permanently docked in space. Although you won’t be able to move, you can swipe through your environment, grabbing up minerals that can later be used to buy stronger ships with better weapons. 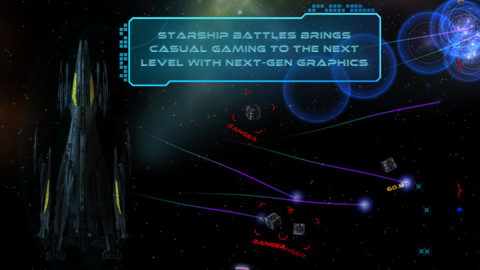 The game gives you about seven seconds to explore before the survival game begins. Tiny ships start to fly toward you from every which way. Actually, they only come from the right two-thirds of the screen. These kamikaze spacecrafts have one purpose: crash into your ship until your shields breakdown and your craft eventually explodes. Playing on iPhone, the tiny brown-grey enemy colors tend to get gobbled up in the blackness of space. Thankfully, amber and red alerts cue you as to their proximity.

Pretty much, you spend most of your time tapping the screen as quickly as possible to stop all the wack-job enemy spaceships from completing their suicide mission. If the screen gets flooded, you lay down a nuke to destroy all the enemies on the screen. It’s a temporary fix that will give you less than a second of relief.

This is where the game starts to get a little different from Missile Command. You can simple survive by using your missiles to destroy all of those tiny attackers or you can go on the offensive. Two or three swipes to the right, you’ll find the alien Motherships. These guys require a little more power to destroy. But, if you switch your torpedo, you can usually take them out in one energy-powered blast.

Here’s the caveat, use your torpedo and drain your shield. It’s a subtle nuance, but adds in just the right amount of strategy to the tried-and-true Missile Command dynamic. Usually, there are two or three large Motherships that are dispensing the tinier Frigate, Cruiser or Corvette style enemies (sounds like Battleship, doesn’t it). Destroy a single Mothership and you will leave yourself open to a barrage of alien vessels.

After about four minutes of play, the game forces you to rely heavily on quick-swipe reflexes. Destroy as many mini ships as possible, lay down a nuke, then swipe to take out a Mothership and finally swipe back to defend your base. It’s that fast, frenetic action that I love – until I die of course. Then, I curse the survival game gods. 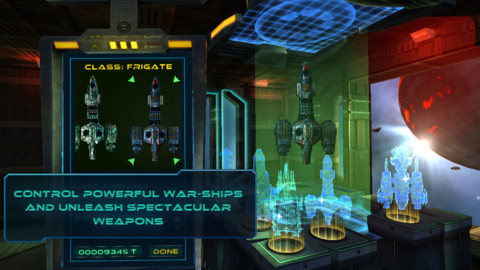 The starter ship is somewhat weak and can only take a few blasts. You can purchase new ships if you’ve accumulated enough minerals or buy minerals from the store to use as currency.

After the Missile Command novelty wears off, there isn’t much to this game besides the survival fest and some eerie music. It could benefit from more space anomalies to shake up the pacing, as well as a broader spectrum of weapons or other power ups. But if you like points and leaderboard bragging rights, then Starship Battles may be your cup of tea.