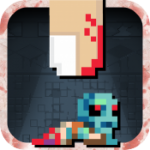 The Tapping Dead (Free), a retro, free-to-play, one button platformer with more than a passing resemblance to classic arcade games like Donkey Kong and Burger Time hit the App Store recently and I decided to give it a go. Boasting 150 levels, five playable characters, and a steep difficulty, The Tapping Dead hopes to separate itself from similar games with its unique aesthetics. Does it?

Well, yes, actually. The description for the The Tapping Dead on the app store claims that it’s easy to use, easy to learn, and easy to die (followed by a mwahahahaha) – and they ain’t kidding. This game is tough.

In a given level you’re presented with a complex room filled with zombies in mine carts, zombies tossing rotten flesh, and zombies doing all sorts of other dastardly things that you need to avoid…by waiting. The Tapping Dead’s one button namesake stops your character in his tracks. Going down a ladder, in between the blast radius of falling projectiles, or right in front of a shopping cart if you’re feeling suicidal, you push and hold that button, you’re not going anywhere. 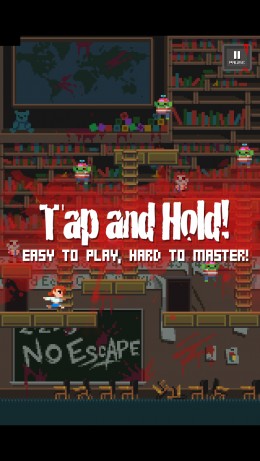 The mechanic works great, and I’ve had countless harrowing moments where I’d stop just in the nick of time to avoid an enemy, or just barely miss that nick of time, curse at myself out loud from the near-privacy of a bathroom stall, and fiendishly start the level again, endeavoring to get the timing just right.

The focus on proper timing is all the more important thanks to The Tapping Dead’s freemium model. Each of The Tapping Dead’s 150 levels feature a coin that be collected by making it through a level speedily. If you spend too much time stopped, the coin disappears until you restart the level – and these coins are needed to buy hearts. Hearts correspond to your lives, and seeing as how each level has a literal buffet of misanthropic creatures waiting to say hi teeth first, you will die and you will run out of hearts pretty frequently. Once you’re out, you can buy more with coins, or wait for your lives to replenish to the tune of one every twenty minutes. If you simply can’t wait, you can buy a coin pack for a dollar or two.

And this feels mostly fair. Like the arcade games of old, the better you are at The Tapping Dead, the less likely your need to spend cash money on it will be (a point echoed in the most recent TA Podcast). During my first two days with the game, I found myself consistently out of lives and constantly tempted to drop a dollar on a coin pack so I could keep going – but as I earned more coins and kept playing, I found myself running completely out of lives less frequently, and a bit more confident in my Tapping Dead abilities, too.

As the first release from Crazy Cricket Games, it’s refreshing to see a new studio hit a pretty good balance between freemium and free-to-play. As a for-profit company releasing a free-to-play game, it’s understandable to put the monetization elements at the forefront – as they do. Every time you run out of hearts the ability to buy a coin pack pops up before you can pop back to the main menu, but by and large I never felt like I had to spend any money on The Tapping Dead at all. Which is great for players, but perhaps not the best thing in the world for the developers. If you’re one of those socially conscious gamers who like to support the makers of quality games, tossing a buck or two Crazy Cricket’s way would be a mitzvah.

Touch Arcade’s loyal forum-goers seem to disagree with my assessment, and it’s entirely possible if you’ve played a lot of one-button platformers, The Tapping Dead may seem derivative or samey. As someone who’s relatively new to this genre, I enjoyed it quite a lot, albiet in small doses. It’s perfect for an iPhone, and runs splendidly on my near-ancient iPhone 3GS, though apparently there have been issues with the iPhone 5. So, your results may vary from mine.

But to me, The Tapping Dead is pretty compelling stuff. This is the kind of game that’s wonderful to have on your phone for a bathroom break, short bus ride, or a conversation you don’t particularly want to pay attention to – something you spark up when you don’t have time to tackle some of the more in-depth experiences offered on iOS, but still want something challenging. That said, The Tapping Dead is a surprisingly high-in-quality diversion. The one-button mechanics are solid, the graphics are charming and may even dust up some nostalgia from the back of your mind, and you get a lot of undead bang for literally zero bucks.