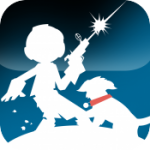 There’s nothing quite as timeless as the bond between a boy and his dog. Countless movies, books, and television shows have been devoted to this heart-warming and somewhat emotionally manipulative theme. However, aside from a less-talked-about-the-better virtual pet craze a dozen or so years ago, this Hollywood favorite has not been particularly well mined by the gaming industry. Fetch ($4.99) a new point-and-click adventure from Big Fish games, hopes to fix that.

At its most basic, Fetch is a very pretty, very cute, and mostly compelling point and click adventure game that charges a little boy in a space helmet, Milo, with the harrowing task of rescuing his beloved puppy, Bear, from the clutches of a not-quite-evil madman. A bizarrely designed sewer, an oddly populated desert island, and the most dangerous museum of all time stand between Milo and his best friend, and each colorful locale is loaded with puzzles, mini-games, and enough interactive elements to make your tail wag.

The plot is minimalistic, but heartfelt and earnest, with barks, sobs, whines, and some minor dialog from Milo, doing the emotional heavy-lifting of a story that takes place in a world containing flyable paper airplanes, dog-catching robots, Pirates, shellfish, row-boats, and singing rodents. Despite the wild setting, the characters ring true, and some nuanced animation and art direction has you rooting for poor Milo and Bear from the first time you see them. 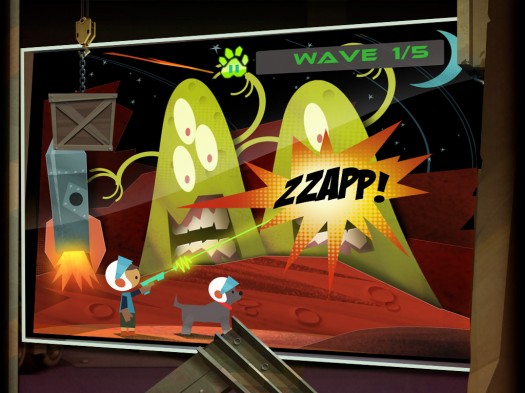 Speaking of art direction, Fetch brings the Beggin (Note: Beggin is a bacon flavored dog-treat) on the audio/visual front, drawing you into a truly bizarre, futuristic, machinized, dystopian universe – the color-scheme mixing stark neon blues, purples, and reds with muddled browns, greens, and grays of watercolor-esque backgrounds to great effect. If you’re a fan of the adventure game genre, the visuals may seem a bit familiar in a Ghost-Trick-meets-Machinarium sort of way – which isn’t bad company.

Adding to the visual pizazz is that a great deal of Fetch’s world is interactive. You can tap signs to light them up, tap skulls on the ground to make them chatter, pop sewage bubbles, and a whole bunch of other auxiliary actions await a player with curious fingers itching for some visual stimulation. This is actually something of a revelation for the adventure game genre, as the concept of “pixel” hunting to find puzzle solutions suddenly becomes a lot less tiresome when dozens of non-essential objects have some life to them. 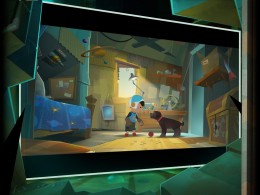 And a vibrant life it is thanks to Fetch’s spectacular movie-studio quality animation. Characters move and emote wonderfully, and from the moment you’re eaten by a temperamental, dog-catching, robot fire-extinguisher, you’ll come to relish every frame Fetch displays. Highlights include singing mice that serenade you while moving their heads like Stevie Wonder, lively, color-coded skulls that need to be fed, and an old man feebly tossing a rubber ball to a dog as he walks off into the sunset – happy for the first time in years. These are the scenes (among others I wouldn’t dare give away) that enter my mind when I close my eyes and think about Fetch, and a chuckle and smirk often follow after – simply put, Fetch warms my heart.

So it’s a minor shame then that the runt of Fetch’s proverbial purebred litter is its gameplay. Don’t get me wrong, there is quality puzzle solving present in this $3.99 doggy bag, just not a lot of it. I was baffled that I was able to beat Fetch in a little under 2 hours – and that included a section mid-way through the adventure that requires you to play a mini-game several times over to earn coins for a vending machine with important quest items. 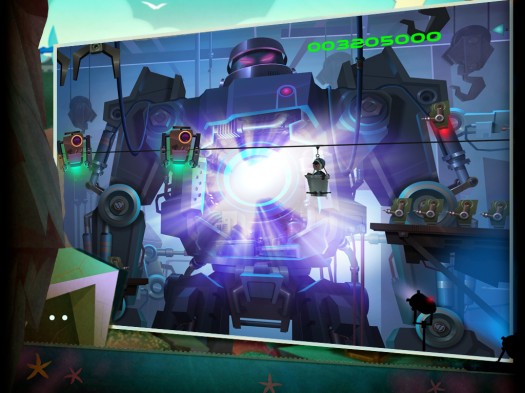 Additionally, Fetch seems a bit schizophrenic about the kind of game it really is. The first two sections feature high quality point-and-click style puzzles that involve managing water levels, turning levers, and moving boxes, combined with an occasional mini-game to break things up and keep the player engaged – Heck, there’s a portion involving a poor, poor, alligator that would feel right at home in a Lucas Arts adventure game of old, it’s that good.

But as the game continues, it kind of gets away from those elements and instead turns into a series of poorly re-imagined Macromedia Flash games, circa 2004. Normally I’m a huge fan of mini-games, they’ve done wonders for Grand Theft Auto, but Fetch essentially throws all the fantastic puzzle solving out the window in favor of poorly implemented action game mechanics for the final act.

There is an interesting amalgamation of these mechanics during a museum section that has you shooting objects in a specific order to move along rails that requires some brain power and quick thinking, and those sorts of puzzles would be more than welcome in the correct circumstances, but ultimately the game ends up skewing in the direction of a mini-game extravaganza instead of giving players more puzzles with satisfying solutions. Worse is that these portions of Fetch aren’t nearly as well animated as the remainder of the game. It’s like ending “Marley and Me” with a broadcast television car chase.

But that being said, Fetch builds up a heck of a lot of capital before it goes all pear-shaped in the final half hour. It’s mesmerizing, and if you’re the kind of person who gets all misty-eyed when thinking of adorable furry animals, you’ll probably enjoy the premise even more than I did – and enjoy the ability to pick up dog collars that correspond to real dogs you can see pictures of – and it’s entirely possible you may even enjoy the mini-game heavy nature of the ending.

Considering how many games on the App Store are essentially doing the same thing, Fetch is mostly unique, and pretty beautiful to boot. For a little less than the cost of a can of Dog Food, you will certainly get your money’s worth from Fetch, especially if you have young children, an aging puppy, or a soft spot for man’s best friend.

Note: Fetch is currently on display at the MOHAI center for innovation in Seattle, Washington. The exhibit features developer diaries, early gameplay demos, and a whole slew of other supplemental material designed to educate folks about the challenges and triumphs of game design. Read more about the making of Fetch in this feature at the WSJ.