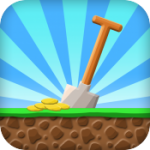 Mugshot Games’ CastleMine ($0.99) is one of those rare mobile titles that did not make its initial debut on iOS. In fact, the tower defense game was first introduced on Windows Phone and garnered enough popularity to hit a million downloads across the platform. In celebration of that milestone, the developers have now ported CastleMine over to iOS. While the game’s basic TD premise is relatively simplistic, its deep upgrade system, tons of missions and digging mechanic offer a lot worth checking out.

CastleMine doesn’t pretend to offer a compelling narrative to set up the game; all you need to know is there are baddies underground coming towards your castle and you need to defend your fortress from them. As this is a TD title, defending your castle is done via placing towers along the enemies’ path. Missions are graded with a three star system, and players earn experience after each level that allow them to buy permanent tower upgrades. 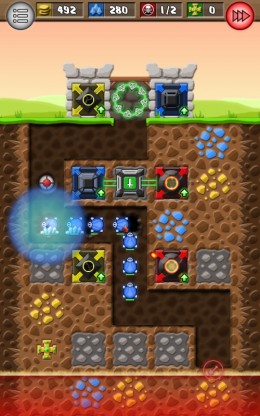 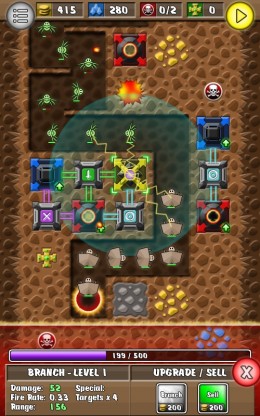 Unlike many other TD titles, CastleMine allows the players to set the enemies path by digging into the ground. Players can dig nearly any path they desire for enemies to follow. In addition, the underground is littered with gold and crystal, which are used to purchase attack and support towers, respectively. Special crosses can also be dug up which increase experience earned at the end, and skulls can be found which increase the difficulty (more to come on that later). There are some caveats however, as stone tiles littered across the ground cannot be dug and the game ends if players dig themselves into a corner.

Otherwise, CastleMine‘s gameplay is pretty basic for a tower defense title. Players have a choice of three attack towers (which can be improved and eventually upgraded down two different paths per tower) and three support towers, which augment the towers that are physically touching them. Enemies come in waves which occur whenever a player digs down a new level. The understated motif also extends to the game’s visuals and enemy design, which really don’t offer much to differentiate itself from other games.

However, beneath CastleMine‘s basic visuals and classic TD gameplay lies a few additions that go a long way towards adding some replayability. For starters, the game’s upgrade system offers a multitude of different ways to improve towers, resource collection and tower strength across three different tiers. Players can also replay missions for additional experience, affording the opportunity to improve your arsenal in case current missions prove to be too difficult. I’m grateful for this option as later missions can be quite challenging (which is not a bad thing).

The other differentiator for CastleMine lies in the actual digging mechanic and the opportunity for custom paths. While players are encouraged to dig however they wish, smart players realize that there are typically two different paths that must be chosen from. The first places an emphasis on collecting experience and resources while the second is focused on collecting skulls which increase enemy stats but afford the opportunity to obtain a full three star rating. Missions will rarely allow players to collect both, leading to decisions that must be made. I’m a fan of this sort of mechanic and I think it’s done well in CastleMine.

It’s probably a safe bet that a lot of iOS gamers looking at screen shots of CastleMine wouldn’t think much of the simplistic visuals. However, I’d employ TD fans to look beyond the visuals and give CastleMine a chance. Mugshot Games does a good job combining established TD gameplay with some neat twists such as the dig mechanics, leading to a game with longevity and enjoyable elements.