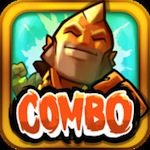 Man. I’ve been nibbling on some delicious crow. Combo Crew is A-OK and I kinda feel bad about writing off brawler-y games on FingerPads devices. This one proves this genre can work on touch, thanks to its utilization rad gesture-based controls.

To rewind a bit, Combo Crew is an everyday brawler that pits you against hundreds of bad dudes and several bosses along the way. The quest is to reach the top of a tower where a really bad dude named Mr. Boss resides. Sounds ridiculous, right? With a wink and a nod, Combo Crew embraces the cheesiness of old-school brawlers, constantly poking fun at the amount of stupidity these things threw at you. From the music, to the character designs, and to the story, Combo Crew‘s aware that everything you’re doing is dumb. I like it for this, and the execution on the satire is pretty good. 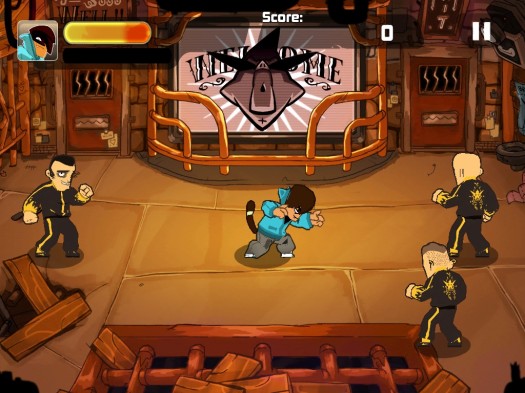 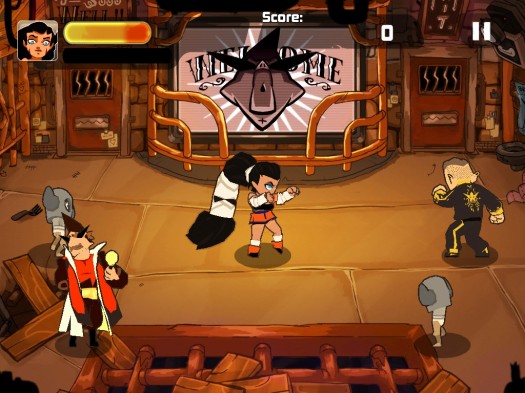 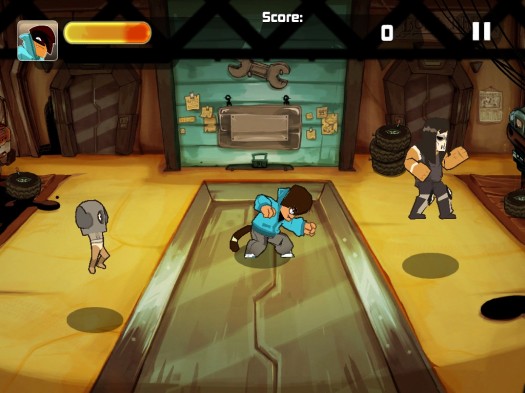 Unlike most of brawlers, including ones we see on iPad and iPhone, Crew doesn’t use virtual buttons. In fact, you don’t even directly control your character’s movement. You just swipe to attack between bad guys. Two finger swipes lead to bigger combos, holding down a swipe charges an attack that can break through defenses, while on-screen taps can counter-attack anyone taking shots at you. As the game ramps up, you start learning new ways to combo, as it integrates multi-directional swipes that can do things like, say, blast opponents into the air for a juggle. The touch controls, in general, are pretty robust considering the simplicity of the control method. I was surprised, at least.

Another neat thing: Crew has a neat social hook in its endless “arena" mode. If you bite the dust, you can opt to send your score to a friend via Facebook or e-mail. If he or she manages to beat that score, you’ll be healed with your friend’s score converted into life points for you. It’s a wild idea, and while it doesn’t use Game Center, this seems like a pretty healthy way to integrate some sort of multiplayer.

If you’re wondering why this looks so good, it’s because Squids maker The Game Bakers is behind it. The art and production elements, as always with this crew, are top-notch.

There’s a lot for us to see, still, in Crew — there’s an entire boost system which gives your characters extra powers, a character unlock system, and upgrades. I’ll have to spend a lot more time to really evaluate if this stuff works and feels fair, but just so you know, no, this thing doesn’t have IAP.

Combo Crew will hit tonight at around 11PM EST. If you’ve got our app (Free) , you can add it to your Watch List to be notified when it’s released. We’ll have more on this one as we dig deeper into it.