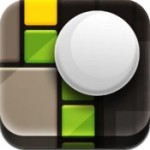 Brick breaking games like the classics Breakout or Arkanoid are pretty timeless, but they’ve also been done to death in the mobile space. Because of that it’s hard to get too excited about a new brick breaker unless it really does something to stand out from the pack. I wouldn’t say that the upcoming Hyper Breaker Turbo is trying to reinvent the genre or anything, but it does have a clean look and complex multi-screen levels which caught my attention. Plus, it has been a while since I’ve had a good brick breaker, so I was actually enthused to check this one out.

If you’re at all familiar with this genre, then there’s not a whole lot to explain about Hyper Breaker Turbo. You control a paddle at the bottom of the screen – the curved variety, not a flat one – and bounce a tiny ball toward the block formations in the playing area, breaking and clearing as many blocks as you can while you travel upwards towards an end goal. There are many different kinds of blocks, some of which have special requirements in order to be broken or just plain can’t be broken at all, and a variety of bonuses and power-ups that fall from broken blocks that you can use to your advantage (or disadvantage, depending on the power-up).

It’s all pretty typical fare, but very clean and polished. The part that stands out about Hyper Breaker Turbo to me are its elongated levels. As you break through a set of block barriers you can continue to go up in the level, with more block formations and obstacles for you to deal with. It’s a nice change from the usual single-screen levels in similar games, and once you do end up making it to the goal your score is tallied and you’re given up to a 4-star rating for completion. You don’t have to break every block to complete a level, but doing so will earn you more points and thus give you a better shot at earning more stars, which are used for unlocking additional themes and sets of levels later in the game.

There’s not a whole lot more to say about Hyper Breaker Turbo, it’s just a very well-made brick breaking game. I will say that the physics feel a little lightweight and wonky at times, but nothing detrimental. Also I’m not a huge fan of using a curved paddle, I’d prefer a flat one, but I am warming up to the one here. The bottom line is that if you’re ready for another brick breaking game, then Hyper Breaker Turbo appears to be a pretty great one. With 75 levels it should give you your fix for some time, so if interested stop by the forums for more impressions and add it to your TouchArcade (Free) app Watch List to get an alert when it hits the US App Store later tonight.