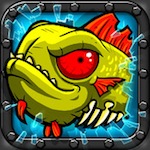 In grade school, I played a game similar to this on CD-ROM. I can’t remember the name of it, unfortunately, but I do recall that it was meant to be educational. You controlled a bunch of actual fish. The goal was, I guess, to learn about the food chain. Zombie Fish Tank isn’t so concerned with this. Surprising, I know! Instead, it leans more on scoring and raw progression. Get big, go to a new level, get big again, and so on. Here’s a trailer that shows almost everything off:

There’s also an actual fish tank component. You earn coins or whatever as you play and can cash those in to buy fish that swim around in a tank that’s displayed prominently on the main menu screen. You can also buy power-ups and stuff in the game’s market. Also, yeah, there’s IAP.

By the way, you control your fish with the accelerometer. A double tap at any time will reset what the game interprets as the center of your device. All you have to do to eat something is collide into it. This all feels pretty good, which is neat.

Zombie Fish Tank hits tonight across iPhone, iPad, and iPod touch. You can catch it at about 11PM EST. Add it to our app’s (Free) Watch List if you want notified when it’s out. And you know you do! Zombies! They’re a thing!