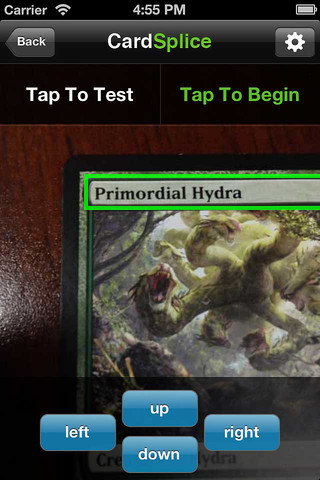 It seems like the longer you play Magic: The Gathering, the more massive your collection of cards inevitably grows, and the greater the urge is to somehow digitize it all becomes. Whether it’s because you’ve got tens of thousands of dollars of cards you want record of for insurance purposes, a neurotic need to catalog everything, or maybe just to quickly view your mana curve in a deck, that itch is definitely there. The problem is, every other app I’ve tried that serves this purpose has involved loads of typing. It’s just the nature of any data collection app, as the first step of analyzing any data is actual often irritating data entry.

CardSplice (Free) aims to change all that. Using technical wizardry that straddles the line between optical character recognition and feeling like straight up black majiks when it’s working properly, all you need to do is wave your cards in front of your iPhone camera to enter them in to the app. Admittedly, it’s far from perfect, and there’s a bit of a learning curve in regards to how you need to hold your phone in relation to the card, how ambient light needs to be hitting the card, and other finicky things that makes the card recognition stop working.

The good news is, the developer is totally on top of this with two options for making papercraft stands for both your iPhone and the cards themselves. Whether you fashion this apparatus via elaborately folding paper or the (seemingly much more simple) cutting a few junk Magic cards up, removing all the variation of holding the phone, holding the card, and making sure the image isn’t blurry seemed to make things go substantially better.

CardSplice is free to try, and a single $2.99 in-app purchase unlocks the recently released “Dragon’s Maze" card set as well as every other card set to be released in the future. Better yet, your data isn’t trapped in your phone either, which often is another negative of these style of databasing apps. It’s all uploaded to the CardSplice site where there’s a variety of options for sharing, searching, and exporting.

Really, the only serious down-side of CardSplice is that the oldest set of cards supported by the app is “Magic 2011," making the app perfect for Standard players, but not so great for fellow obsessive M:TG nerds whose weeks are defined by which nights you’re playing Standard, Modern, and Legacy. But, hey, this is a great start and from where I’m sitting, a necessary utility for any iPhone-owning Magic player.

UPDATE: If you’re into nitty gritty rules discussion, there’s a pretty interesting thread forming on Reddit with various Magic judges (including a level 5 judge) on whether or not using this in a sanctioned environment is legal.