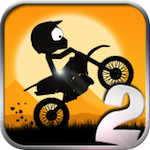 Because we’re always scanning the scene for games with sickest of sick tricks, Eli and I decided to give Djinn Works’s Stick Stunt Biker 2 (Free) a shot. By titling alone, you probably already know what to expect. Yes, it’s a stick figure game. Yes, it’s physics-based. And yes, it has sick tricks. But here’s something you might not know: it also doesn’t have a rigid progression structure. Once you get access to a world, you can play every level in it, regardless if you manage to get one or even zero stars in a given level. Each win or loss is met by a loading screen that instantly sucks you into the next level, which is a nice pacing touch. A lot of these games make you retry and retry the same stuff over and over again, which for us tends to cause a lot of fatigue.

In this look, you’ll notice that we can’t quite pull of a sick trick. I swear, I could almost write a guide about how NOT to play this game. I’m pretty bad at it. Oh god, is this becoming a theme in TA Plays? It is, isn’t it.

Anyway, you can grab Stick Stunt Biker 2 right now if you’d like. And if you still dig these kinds of physics games, you should consider doing so. The rapid-fire progression is a nice touch, plus the physics keep your bike really rounded to the ground. It just doesn’t feel as loose and insane as its brethren, which is cool.