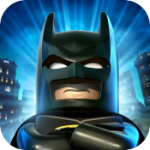 It’s been almost a year since last we saw an iOS port of the successful LEGO series. While we’ve yet to see the likes of LEGO Lord of the Rings or Pirates of the Caribbean grace Apple’s platform, the folks at Warner Bros saw fit to show some DC universe love with LEGO Batman: DC Super Heroes ($4.99). Hampered only by spotty controls, DC Super Heroes is an otherwise great port bringing a fresh coat of paint to the classic LEGO gameplay formula.

Unlike the previous LEGO ports we’ve seen, DC Super Heroes actually features an original narrative within the DC comic universe. While the game focuses at the onset on the escapes of Batman and Robin (along with the usual villains) other heroes, such as the iconic Superman, get weaved into tale. Of course, being a LEGO game, players eventually have the option of playing as a wide variety of DC icons, with over 80 playable characters (along with create-a-character minifigs) available for the unlocking. 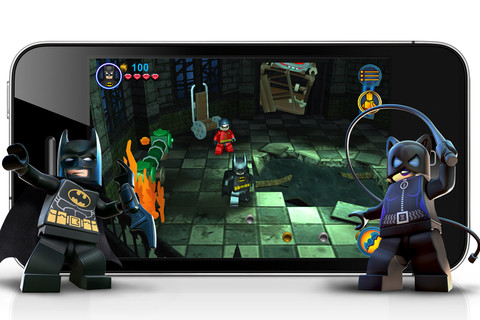 Gameplay, meanwhile, is pretty familiar if you’ve played any other LEGO games. Like others in the series, DC Super Heroes combines platforming, puzzles, and decent amount of brawling. In addition, there’s also ample opportunity to collect studs, which are used to unlock the myriad of characters and extras available. While DC Super Heroes does offer a few new twists, such as some additional depth with the various Batman and Robin suits that expand powers, gameplay largely remains unchanged and fairly linear. That’s not to say it’s a bad thing, as LEGO games have typically been highly approachable while offering tons to do. DC Super Heroes certainly doesn’t disappoint in this regard.

Another new addition to the iOS LEGO ports is the inclusion of Golden Bricks, which can be purchased via IAPs. While the game’s additional characters and extras can still be unlocked with enough studs, progression, and collectibles, golden bricks can be used to sidestep a lot of the stud grinding and unlock items a lot faster. In this regard, I didn’t really mind the IAP as most LEGO games are a bit too grindy for my tastes and golden bricks could be used to speed up some actions of the game. 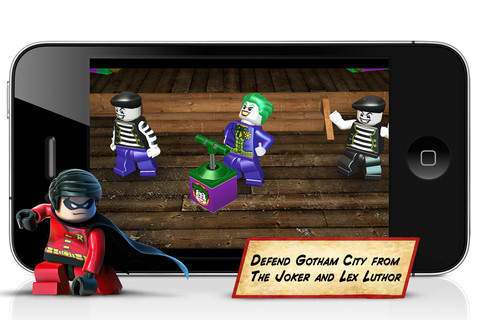 Maybe it’s due to the freedom of an original story or because the universe history is so deep, but I really enjoyed DC Super Heroes from a thematic standpoint. From the onset, you’re treated to the epic tunes of the Danny Elfman Batman theme and the game is full of little nods to various facets of the DC Universe. In addition, the large swatch of playable characters means fans should have plenty of options in playing their favorite characters (assuming said characters have the necessary super powers to pass the level). The fact that the game features full voice acting (a first for iOS) also goes a long way towards making the story more enjoyable.

Spotty controls have been an issue with LEGO iOS ports in the past, and unfortunately they continue with DC Super Heroes. Previous LEGO games offered players either virtual buttons or touch-based movements. While DC Super Heroes is the first port to offer players both options, I still had some problems with both. The touch-based scheme is the more intuitive of the two options, but there’s a tendency to tap errantly on enemies/environmental items on the smaller iPhone screen (although it works better on the iPad). Virtual controls, meanwhile, work as mediocre as one would expect. That’s not to say the game isn’t playable, but it’s definitely the weak link for the game. 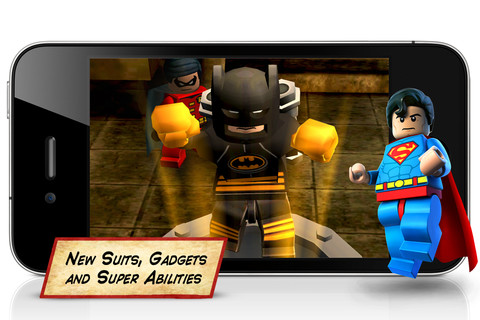 Control issues aside, DC Super Heroes is a welcome addition to the few LEGO games currently on iOS. In fact, I’d say it’s the better LEGO game currently on the App Store considering the wider appeal of the story combined with the decent visuals, awesome music, and familiar LEGO gameplay. Suffice to say, LEGO fans have little reason not to check out DC Super Heroes, while anyone else interested in a light-hearted adventure should take the plunge.